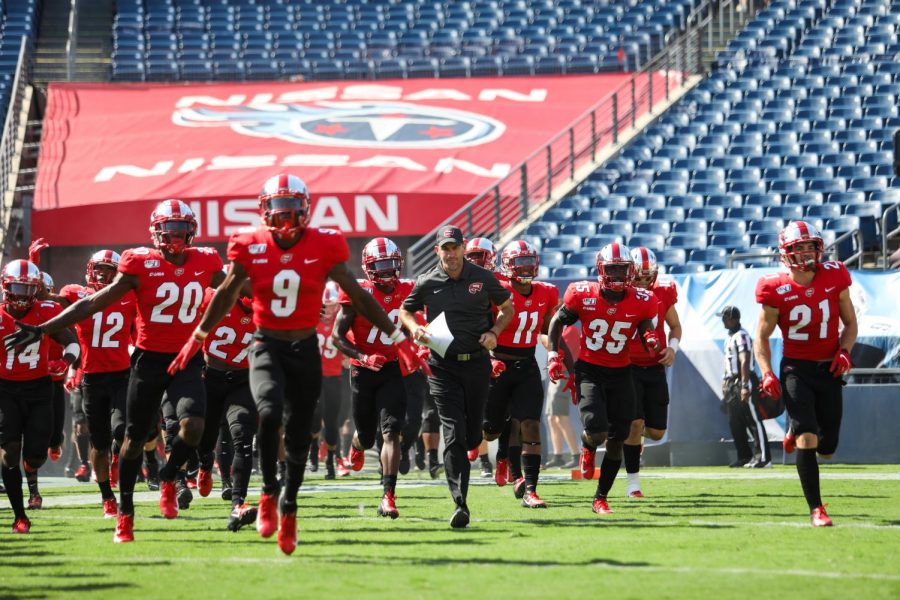 WKU head coach Tyson Helton leads his squad on to the field to play in-state adversary, the Louisville Cardinals on September 14, 2019 at Nissan Stadium. Louisville won 38-21.

WKU has seen mixed results in the first three games of the Tyson Helton era, as both the offense and defense have had struggles and successes in the first quarter of the season.

Regardless of the good and the bad WKU has put on the field so far, the first-year coach said he’s happy with how the Hilltoppers have battled through adversity.

But the team’s latest result will certainly leave Helton and the Hilltoppers with a bad taste in their mouths.

The Cardinals blew past WKU in Nissan Stadium in Nashville, netting 415 yards of offense and running for 210 yards against what had been a stout WKU run defense.

Helton said the Louisville front was too much for the Hilltoppers to handle on Saturday.

“They just overpowered us, to be honest with you,” Helton said. “Defensively for them, they controlled the line of scrimmage. They were able to hold the point and control it. I thought the O-line battled. They were doing the right things. They just got a little bit outmatched here and there.”

WKU will also be forced to name a new starting quarterback.

Helton announced on Monday morning that redshirt junior quarterback Steven Duncan injured his left foot in the third quarter against Louisville and will be out indefinitely. Doctors recommended Duncan have surgery immediately, Helton said.

Helton said on Monday he didn’t know about the injury during the game, but Duncan later told Helton he began feeling pain late in the third quarter after he “got kind of twisted up” by a Louisville defender.

The team is now expecting to be without Duncan for “several weeks” — and maybe the remainder of the 2019 season — which opens the door for Arkansas transfer Ty Storey, redshirt sophomore Davis Shanley and redshirt freshman Kevaris Thomas to be the “next man up” as QB1 for the Hilltoppers.

“I would think, you know, Ty would be the obvious answer just because of what we’ve been trying to do,” Helton said. “But I really like Shanley, I really like [Kevaris Thomas], so we’re gonna leave it open and just try to have the best plan for UAB.”

With the first three-game stretch of the season already in the books, Helton and his entire staff will have a chance to evaluate the team’s progress and make any necessary adjustments.

Some of the early season positives include redshirt junior running back Gaej Walker, the run defense and the offensive line play. A few of the negatives have been a handful of big plays that have burned WKU in each of their losses, execution on third downs and a lack of offensive identity.

Walker has been a major surprise for the Hilltoppers. The former defensive back broke the two-year streak of no 150-yard WKU rushers against Central Arkansas and racked up back-to-back 100 yard performances to open the season at his new position.

Louisville head coach Scott Satterfield acknowledged the talent Walker has at the running back position.

“We knew [Gaej Walker] was a talented running back and he showed it today,” Satterfield said postgame. “He had some good speed at times.”

The run defense has also impressed early on. Louisville obviously had success on the ground, but as a Power 5 group, it was reasonable to expect such a performance running the football.

Through its first two contests, WKU gave up just 171 rushing yards for an average of 2.3 yards per carry. Defensive coordinator Clayton White said prior to Saturday’s game that he credits the defensive line for setting the tone for the WKU run defense.

“The defensive line does a really good job of building that wall to where the defensive backs and linebackers can run through and make plays,” White said. “I think the defensive line is starting to play. They understand the defense. The coaches do a great job of getting those guys ready.”

Another bright spot for WKU this season is the offensive line. The unit has opened up gaping holes for Walker and has paved the way for his pair of 100-yard performances. The line has also given up just two sacks through the team’s first three matchups.

Redshirt senior receiver Lucky Jackson had high praise for the line after the team’s win 20-14 over Florida International.

“Shout out to the O-Line because without them it wouldn’t be possible just because protecting the quarterback, protecting the running back, making this thing run smooth,” Jackson said in a postgame release. “It was great for the offense in conference.”

As for the negatives, big plays have crushed WKU in each of its two losses.

Louisville receiver Tutu Atwell had touchdown receptions of 46 and 62 yards. UCA receiver Lujuan Winningham posted 222 yards and three touchdowns to help knock off the Hilltoppers 35-28 in the season opener.

Even in victory, WKU allowed a 40-yard completion to Maurice Alexander that set up the only offensive touchdown FIU scored.

Redshirt junior defensive tackle Jeremy Darvin, a Nashville native who grew up near Nissan Stadium, said the defense was prepared for Louisville but still gave up chunk-yardage plays.

“This has been redundant, just three to five plays in the game,” Darvin said. “We let up a big score on a pass and we let a guy break out on a run and we just gotta get those three to five plays and you know, maybe the ball tips our way in both our losses this year.”

WKU has also been unable to convert third downs in recent matchups. After going a solid 9-of-16 on third downs against UCA, the Hilltoppers have taken a step back in the last couple of games, converting a combined 9-of-29 in the next two games against FIU and Louisville.

Helton says it’s his job to put his players in the best position to succeed and WKU must improve its offensive execution.

“As a coach, you’re always going to try to put your team in the best position to go out there and execute,” Helton said. “Sometimes [Louisville] played good defense, and sometimes we didn’t execute. That’s football. We gotta go back and try to get better.”

A lack of offensive identity has also been an issue for the Hilltoppers.

Helton said during the spring he wanted to “sling the ball all over the place” and play an entertaining brand of football. Three games in, that hasn’t exactly occurred.

Key playmakers expected to have an impact — such as Jackson and redshirt junior tight end Kyle Fourtenbary — have been inconsistent thus far. Instead, Helton has stuck to the ground game and more intermediate throws to begin the season.

The offense likely won’t change much following Duncan’s injury. Shanley, Storey and Thomas are just as mobile in the pocket and all three have solid to above-average arm strength, so whomever Helton chooses to be his new signal caller won’t be asked to go too far outside of his comfort zone.

Helton said the quarterback room features several players who can help the team win games, and the Hilltoppers might try their hand at utilizing all of their “different skill traits” in games to come.

“The first thing I want to do is put the best 11 out there offensively that gives us a chance to win,” Helton said. “So it may not be a one-man deal. You know, certain guys may have certain packages and we gotta do a great job as coaches of having the right packages for a guy. I’m not there yet, to be honest with you, because this happened so fast.”

Junior wide receiver Jacquez Sloan said the team’s performance so far hasn’t been frustrating and the Hilltoppers are “going to get things working” during their bye week.

With more changes sure to come over the next week, WKU will take its 1-2 record into the rest period.

The Hilltoppers will be in action for the next time on Sept. 28 against Alabama-Birmingham in Houchens-Smith Stadium. Kickoff for the Parent & Family Weekend game is set for 6 p.m.