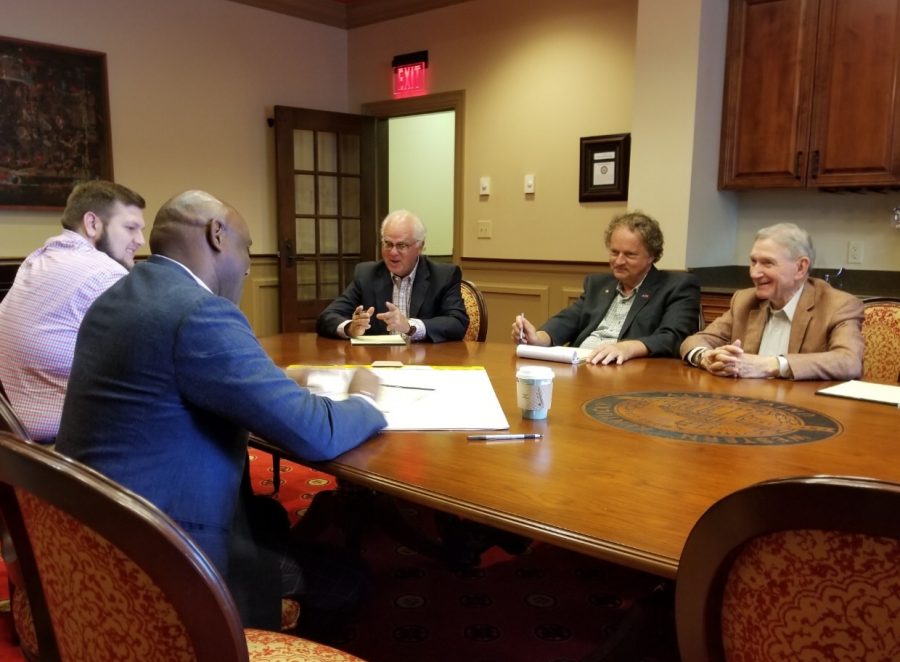 Risk management and online learning were the main topics of discussion at WKU’s annual retreat for its board of regents, which took place in the Augenstein Alumni Center.

The first presentation was given by Jennifer Miller, internal audit director, about enterprise risk management. Miller said that, in her perspective, the less cumbersome the risk management process is, the more involved people will be in it. One part of risk management is being prepared for the best and worst case scenarios according to Miller.

“There is no hard and fast rule about the right way to do this,” Miller said. “But I do know the wrong way to do it is not to do it at all.”

Regent Phillip Bale, board chair, and President Timothy Caboni agreed that more discussion involving risk preparedness and how much risk WKU is willing to handle needs to take place. Miller said WKU is a better place with risk management than it was when she started working here.

Miller pointed out some things that were missing in the university’s risk management such as risk philosophy, responses to risks, and using advanced technology for risk management.

“If we don’t have all of these right now, it’s not going to destroy everything but we are taking steps to get there and we just need to take a few more,” Miller said.

Regent George Nichols III and Regent Julie Harris Hinson shared their views on risk management from personal experience with their jobs. Nichols was said that no one is good at risk management, and Hinson spoke on how hard it is to balance all the information relating to risk management and employee concerns.

The discussion turned to the involvement and preparedness of the Regents. The question of how the Regents could be more involved in the process of risk management came up.

There was discussion about meeting more often or having more casual meetings like the retreat to facilitate more discussions.

“In my time on the board, these meetings have been more engaged, they’ve been more productive than any committee or board meeting that I’ve been to but we only do it once a year,” said Regent Jason McKinney. “So why aren’t we doing committee and board meeting once a quarter on the same day, and doing these more often?”

Miller’s presentation ended on the key takeaways of the necessity of support from the top, taking small steps to improve the process, and putting the process in the regular part of general operation.

The next presentation was given by Beth Laves, associate vice president of the division of extended learning and outreach, on innovating online education. Her presentation focused on the evolution and growth of online learning with some focus on resources available for students.

Laves pointed out that many of the online students are part-time or short-term students who are in and out of college as they finish their degree. She also discussed the regional campus and the changes being made at those to be more innovative.

“We also see a lot of students go in and out,” Laves said. “We’ll have students who are online only one semester, the next semester they are on our campus.”

Laves provided a map that displayed the concentrations of online enrollment across the state and the nation. The state had higher populations in Daviess County and Hardin County. The nation show a higher concentration in Tennessee, especially between Nashville and Bowling Green, Texas and Florida.

The group discussed the contracts between the Division of Extended Learning and Outreach and two military commands and a program allowing joining members to take classes in person on base for four weeks and then finish them online.

The enrollment numbers of online classes overall were brought up, and Laves pointed out that even though the numbers had plateaued, it wasn’t necessarily a bad thing in the face of declining enrollment. The variety of online and partially online courses were discussed by the regents with Laves.

Laves pointed out that the availability of classes changed as professor came and went. The group also discussed how online classes where targeted towards degrees and certificates so students could use their financial aid on the costs.

“We have some things going on with online student support services,” Laves said.

Bale brought up the powerhouses of online learning like Southern New Hampshire University. Laves pointed out that their methods are very different than WKU’s and that the biggest competitors are other in state universities like the University of Kentucky and Northern Kentucky University. One of the ways that WKU could be more competitive is to look at the prices of classes, Lave said.

The Regents discussed the effects of changing the prices for students at the main campus and at the regional campuses. The rate is competitive out of state, but the resident rate is higher. The discussion turned to making the rate the same and what that would do. Laves and Caboni pointed out that there are strategies and tests in the works to figure out what needs to be done for online learning.

“This is not traditional education, and if we try to overlay our traditional way of thinking, it will not work,” Nichols said.

The Regents discussed changes in student interest and possibly ways to help the situation. Caboni said that it was about holding DELO accountable for improving online learning, getting the deans involved, and making it a part of WKU’s DNA.

Corrine Murphy, dean of the College of Education and Behavioral Sciences, was brought into the conversation to talk about what CEBS was discussing related to these topics and what the deans were discussing in relating to helping and explaining these things to faculty. Murphy spoke about how changes needed to be made due to changes in teacher certification in Kentucky.

“Faculty really do appreciate that we value their expertise and their delivery of the programs,” Murphy said. “They want to get on board.”

The conversation turned back to other ongoing online learning projects such as coding camps that can be turned into credit hours upon completion. Nichols pointed out that online learning has become more about starting small with stackable or modular learning that may result in a certificate at different points and build to a degree. He said that providing on the spot learning will bring people back again and again for each thing they face, which could build to a degree from WKU.

“I’d actually rather have you as a lifelong learner than a graduate of my college,” Nichols said.

After lunch, the group got back together for a board development session lead by Christoper Loss, a Vanderbuilt University professor at Peabody College, where he led a discussion about WKU’s place in the world. The group broke out into smaller groups and discussed issues facing WKU. The overall consensus was that issues relating to students were of the highest priority.