‘Expect to win’: Hilltoppers eager to show off new-look squad 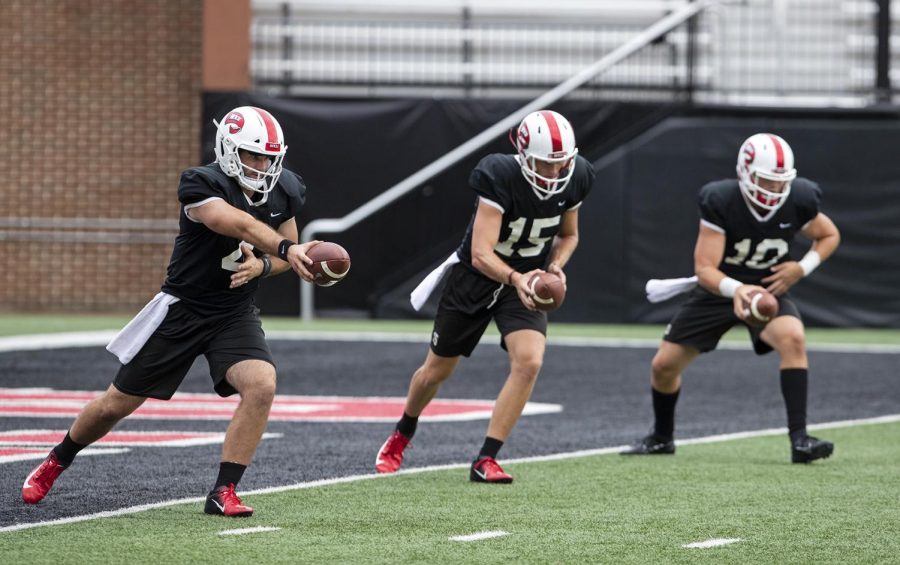 The wait is over for the WKU football team — it is finally game week on the Hill.

The Tyson Helton era kicks off Thursday night, and the Hilltoppers will get a chance against Central Arkansas to give their first-year head coach a 1-0 all-time record.

The Hilltoppers will also be looking to bounce back in 2019 after an abysmal 2018 season that only consisted of three wins and resulted in the firing of former head coach Mike Sanford.

WKU and UCA have only met one time before. The Bears defeated the Hilltoppers 28-7 back in 2009.

Helton emphasized perfect execution within the process as a key to winning the game.

“For us to win, it’s really important for our team to do everything right within the process,” Helton said. “Substitutions are critical during the game. Do we do that right? Does everyone know their role and have mastered their role and are doing correctly during the game? That’s what good football teams do.”

Offensive coordinator Bryan Ellis said the Hilltoppers have been preparing for the opener for a while now.

“We started preparing for Central Arkansas before today,” Ellis said. “I don’t think a whole lot changes. The starters are getting a lot more reps preparing for a game. We started a couple weeks ago. We’re just kind of grooming everything and making sure we like what we’re ready to run.”

Redshirt junior Steven Duncan will get the nod at quarterback to open the season. Duncan threw for 1,071 yards and nine touchdowns in 2018, but will look to improve those numbers as the Hilltoppers’ full-time signal caller.

Duncan called it a relief when he found out he would get the initial shot at quarterback.

“It’s a relief coming off my shoulders,” Duncan said. “I’m thankful that coach trusts me enough to play for this program and be the guy out on the field.”

Ellis noted Duncan’s playmaking ability is what set him apart in a tight race with Arkansas transfer Ty Storey for the starting job during spring practice and fall camp.

“It was tight,” Ellis said. “It was a tough decision. Steven’s ability to extend the play a little bit—push the ball down the field—kind of pushed him over the edge.”

On the defensive end, defensive coordinator Clayton White enjoys having some returning experience. But White wants to make sure the anxiety of the first game doesn’t get to his unit.

“It helps a little,” White said about his unit’s experience during Monday’s presser. “But the first game jitters will always be there. You want to make sure your guys are seeing what they need to see.

“You want to make sure they’re not too anxious in that first game. But you’re also confident with having some guys that have been there.”

White’s experienced unit will also be bolstered by the addition of Georgia transfer Jaden Hunter. The program confirmed Tuesday that the redshirt sophomore linebacker will be immediately eligible to play at WKU.

Redshirt senior defensive lineman Jaylon George said he is ready to finally hit someone with a different color jersey.

The Hilltoppers and Bears kick off at 6:30 p.m. in Houchens-Smith Stadium Thursday. The game will also be streamed live on ESPN+.