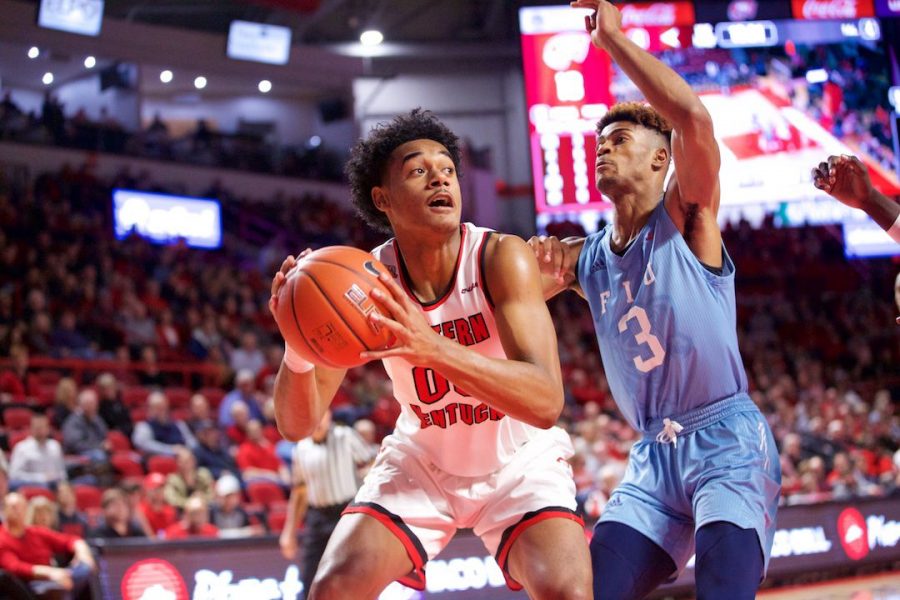 Freshman forward Tolu Smith looks for space down low during WKU's 77-76 loss to Florida International Thursday in Diddle Arena. Smith had six points in the loss.

“First off, I want to glorify God for continuing to allow me to play the sport I love,” Smith wrote in a tweet posted to his Twitter account. “I want to give a huge thanks to Coach Stansbury and the rest of the WKU coaching staff for allowing me to play at their program. Bowling Green was amazing and the people were even better. To my teammates, it will always be love from me and I truly wish the best for all of you guys. Relationships built throughout Western Kentucky will always be remembered.

“With that said, I have decided to put my name in the transfer portal to explore other options. I am very grateful for what Bowling Green and the university has done for me!”

Smith was a key player for head coach Rick Stansbury off the bench during the 2018-19 season, as the 6-foot-10 forward appeared in all 34 games. Smith averaged 10.1 minutes of action, grabbing 2.6 rebounds and 3.3 points per game on 58.3% shooting from the floor.

Though Smith didn’t make a start last season, he made strides as the season wore on. The 245-pound inside presence made his final eight field goal attempts of the season over a seven-game span, which likely meant Smith would’ve been expected to contribute more in his sophomore season.

If Smith decides to stay at the Division I level, the Bay St. Louis, Mississippi, native will have to sit out next season due to NCAA transfer rules and will then have three years of eligibility remaining.

Smith’s brother — Galen Smith Jr. — plays for Xavier University in New Orleans and was listed as a sophomore on the team’s 2018-19 roster. Smith and Smith Jr. formed a formidable duo at Bay High School during their prep days, so Smith could elect to drop down to the NAIA level and play immediately alongside his sibling, who averaged five points and 4.1 rebounds in 14.7 minutes a season ago.

Smith’s departure marks the 17th time a player has left the program early under Stansbury since he became head coach in 2016.