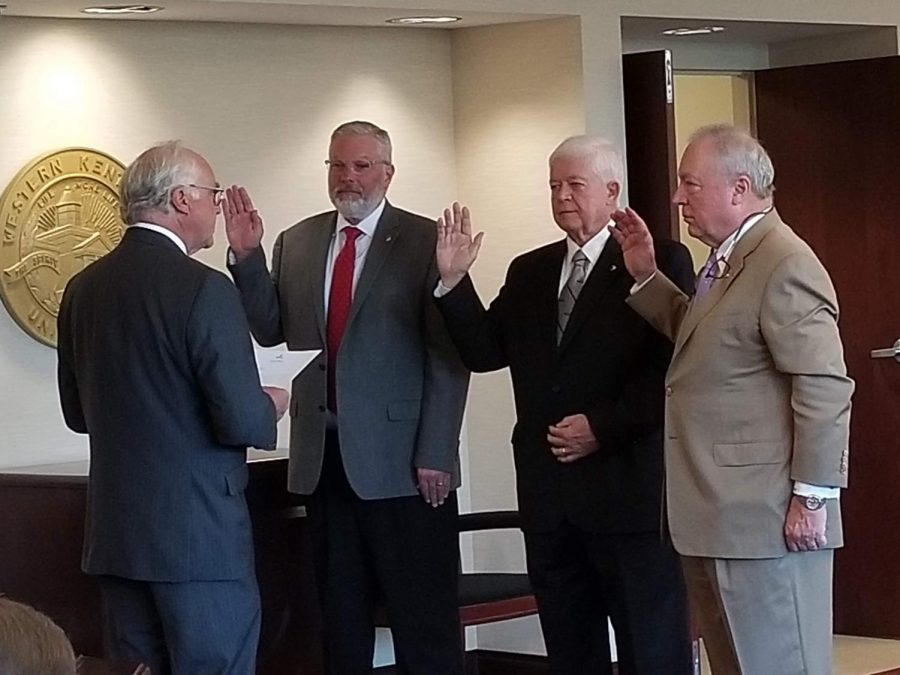 Former Regent Chair Phillip Bale swears in David Brinkley as new board secretary, Fredrick A. Higdon as new board vice chair, and Gillard B. Johnson III as new board chair at the third quarterly Board of Regents meeting.

The name change of the School of Journalism and Broadcasting to the School of Media was approved in a unanimous vote today at the Board of Regents meeting in Jody Richards Hall.

The name change has caused much controversy among alumni after hearing about the name change which was first brought up during the special called budget meeting by the Regents on June 21. Many alumni expressed disapproval of the name change through letters and social media.

When the name change came up for vote at the Regents meeting, Regent Julie Harris Hinson had it pulled for discussion.

Potter College of Arts and Letter Dean Larry Snyder and Mac McKerral, a journalism professor, were present to speak on the name change. Snyder said the name change was a faculty decision and the significance of their agreement on the situation. McKerral discussed the history of the journalism program and how name changes over time have reflected that environment at WKU and the world that today’s graduates are entering. He also reinforced that this will help recruitment for the school.

“When some of those students say they want to pursue a career in journalism, there’s a certain amount of trepidation on the part of the parents, which is totally understandable,” McKerral said. “That’s not a product of those parents thinking that somehow journalism doesn’t have value anymore, that it doesn’t serve a useful purpose with regard to our country and the way it operates. They’re concerned because of what traditionally comes with careers in journalism: relative low pay and in this environment that we face now, a tight job market and not much job security, and so they have reason to be concerned.”

McKerral went on to explain that graduates from the journalism program leave with a set of skills that make them very hirable in many fields. He also addressed the amount of alumni concerns that had come up and the need for better communication and outreach with the alumni.

“Western Kentucky University’s journalism program is something we’re proud of, something we will continue to support and elevate at this institution,” President Timothy Caboni said. “Just because we’re changing the name of the school doesn’t mean we’re changing our focus on the program.”

Caboni pointed to the strong continued support of the program. With no further discussion, the Board of Regents approved the change of the name from the School of Journalism and Broadcasting to the School of Media.

Snyder was happy the Regents agreed and was ready to move on. He acknowledged alumni feelings on the situation and is working with the department on how to better reach alumni and to voice their concerns.

“I think the school is moving in the right direction, and we’re being forward looking, and we’re taking into consideration the needs of our students, the changing marketplace and the kind of training that our students need,” Snyder said. “I think the school name changes simply signals a desire of the school to be current and creative as we’re training our students, but we’re not getting rid of the things that we do well and the things that have made us great. We’re just looking for new ways to put things together so students will be successful.”

Robert Dietle, interim director of the School of Media, says there is a plan to work on their communication with alumni in the upcoming year.

“Right now, we’re sending out a newsletter to alumni once a year, but we’re going to shift to a monthly, brief newsletter which includes a summary of what happened at the latest faculty meeting so that alumni will be aware of things that are being discussed,” Dietle said.

Among the other items the Regents approved at today’s meeting are the creation of emergency management disaster science certificates, faculty and staff emeritus appointments and the 2019-2020 audit plan.

Positions were updated within the Board at Gillard B. Johnson III became the new chair, Fredrick A, Higdon became the new vice chair, David Brinkely became the new secretary, and Will Harris was sworn in as the new student regent. Caboni presented former Regent Chair Phillip Bale with a special chair in honor of his time as chair of the Board of Regents.