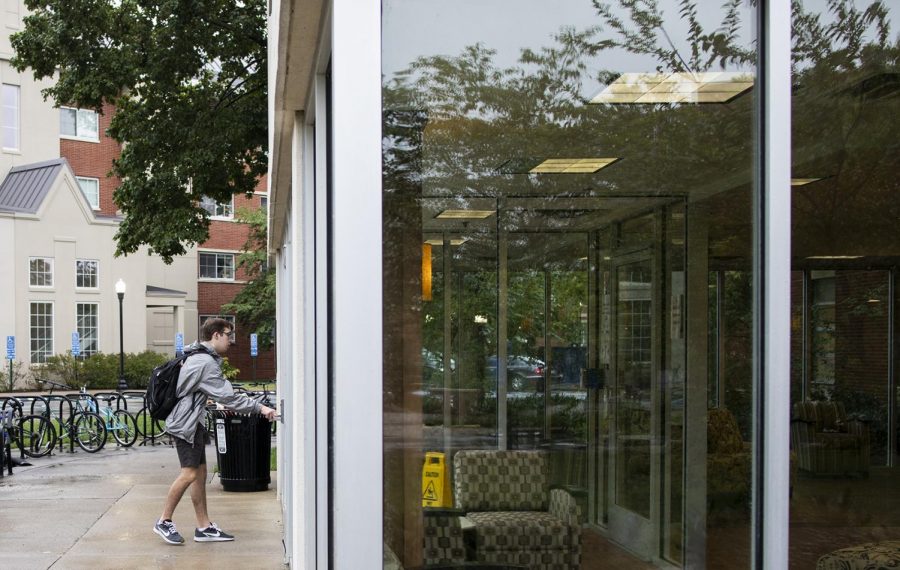 A resident walks into Minton Hall on Monday, Aug. 26, 2018. Fall of 2019 is the first semester residents are allowed back in Minton Hall after serious efforts to eliminate mold.

Minton Hall reopened its doors for residents last week after about a year of renovation following several reports of mold in 2018.

After Minton Hall closed its doors in the fall of 2018, Minton underwent a top to bottom cleaning process from November 2018 to August 2019. Residents were originally expected to return to Minton in the Spring of 2019, but the hall’s reopening was delayed another semester after it was discovered that additional work was needed.

Mike Reagle, executive director for Housing and Dining at WKU, said the entire building, including all air handling equipment, was searched and had mold removed. Overall, he said about $750,000 was spent on Minton improvements during its closure.

Additionally, Reagle said the work order system has been improved so that problems can be resolved more effectively. In a meeting with Herald editorial board, WKU President Timothy Caboni explained maintenance requests will now be handled by facility services rather than HRL.

Reagle said Housing and Residence Life completed some additional remediation in Minton over the summer prior to residents moving back.

Brittney Gruber, a senior at WKU who had lived in Minton Hall every semester prior to the relocation of residents in November of 2018, said it was difficult adjusting to the various changes associated with the relocation.

“For my last semester on campus, I was dealing with a different room, roommate, meal plan, and walking routes to my car and classes,” Gruber said. “It was hard to describe this to someone, especially my parents, when other students and faculty assumed it wasn’t a huge deal.”

For Gruber, the anger has faded, but the memories of the difficult relocation remain and she said she wonders if and when the mold issue would be resolved.

According to HRL, it has been.

News reporter Abbey Nutter can be reached at 270-745-6011 and [email protected] her on Twitter at @abbeynutter.