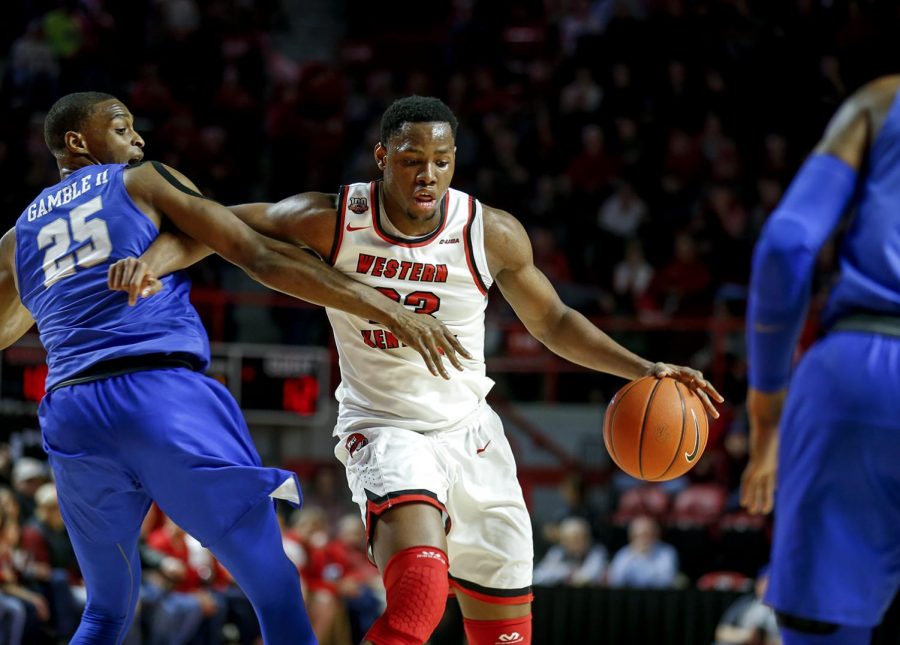 Freshman center, Charles Bassey makes his way down the court during WKU's game against MTSU on Feb. 14.

The WKU men’s basketball team officially released the full regular season schedule for the 2019-20 campaign Tuesday, and at least 13 of the teams the Hilltoppers will go toe-to-toe with this season won 20 games or more last year.

This season will be head coach Rick Stansbury’s fourth year at the helm of the WKU men’s basketball team. Throughout Stansbury’s time on the sideline, he has compiled an overall record of 62-42.

“Every year, we strive to put together a schedule that will excite our fans and best prepare our team to compete for championships,” Stansbury said in a press release. “This season’s schedule is full of opportunities, and we will need Hilltopper Nation behind us every step of the way.

“There are several regional road games that will allow fans to travel with us, and we will need Diddle Arena sold out every night to help us take advantage of one of the best atmospheres in the country.”

The Hilltoppers will play in Diddle Arena 16 times this regular season and nine of those contests will be against Conference USA schools.

Playing on the road 16 times will counter the home-court advantage for the Hilltoppers this season, but WKU is also 7-3 against Power 5 opponents over the last two seasons, including home, away and neutral site victories.

To begin the year, the Hilltoppers will host Kentucky State in an exhibition contest on Nov. 2. WKU will then open the regular season with two consecutive home games against Ohio Valley Conference members Tennessee Tech on Nov. 5 and Austin Peay on Nov. 9.

The team’s first road contest will be at Eastern Kentucky on Nov. 15 — the Hilltoppers hold a 113-44 edge overall when facing the Colonels.

As part of the U.S. Virgin Islands Paradise Jam, the Hilltoppers will then host in-state opponent Campbellsville on Nov. 18 as a campus-site game of the Paradise Jam event.

The program will then shift its focus to a time where three road games will be played in the U.S. Virgin Islands.

Game one against Bowling Green is set for Nov. 22 at 8 p.m. The Falcons finished 22-12 last season, falling in the Mid-American Conference Championship game.

The Hilltoppers will either play Cincinnati (24 in NCAA Evaluation Tool in 2018-19) or Illinois State in their second game of the Paradise Jam event.

Following the getaway, the Hilltoppers will head to Nashville, Tennessee, for a contest against Louisville on Nov. 29 in Bridgestone Arena.

WKU will meet the Cardinals, a squad ranked in the preseason top 10, on Black Friday. The Hilltoppers will be hoping for a better result than the last time the two teams met in 2015 — Louisville came out on top in that contest, 78-56.

WKU will play at Wright State on Dec. 3 before coming home to welcome Arkansas on Dec. 7. The Hilltoppers played at Arkansas last season, pulling out a dramatic 78-77 road win. The Razorbacks will be the first Southeastern Conference team in Diddle Arena since Mississippi visited WKU in 2014.

Beginning with the Arkansas game, the Hilltoppers will have a stretch where 8 of 12 games will be played in Diddle Arena, including an in-season exhibition contest against Kentucky Wesleyan on Dec. 17.

During this span, WKU will also travel to first-time opponent Rhode Island on Dec. 21 and wrap up non-conference play at home against Belmont on Dec. 28.

Beginning the 2020 portion of the campaign, the Hilltoppers will begin C-USA play by hosting North Texas on Jan. 2 and Rice on Jan. 4.

WKU will play five of its first eight C-USA games in Diddle Arena, including a stretch where the Hilltoppers will play rival Marshall twice in four days – Jan. 22 in Huntington, West Virginia, and then again on Jan. 25 in Diddle Arena.

WKU has only two regularly scheduled home games in February. The first contest is against Louisiana Tech on Feb. 6 and another two days later against Southern Mississippi on Feb. 8.

Prior to the team’s two February home games, WKU will travel to face Florida Atlantic on Jan. 30 and Florida International on Feb. 1. To wrap up the regularly scheduled portion of the regular season, the Hilltoppers will also head to to Texas-El Paso on Feb. 13 and Texas-San Antonio on Feb. 15.

The last four matchups of WKU’s regular season slate will once again be determined at a later date under the C-USA Bonus Play model.

Teams will be placed in one of three groups based on conference standings through the first 14 games of league action — two groups of five (1-5 and 6-10) and a group of four (11-14).

Teams will then play within their respective groupings, with home and away games determined by a preset formula.

Following the completion of all 18 conference games, the top 12 teams based on final league standings will be seeded in the C-USA Tournament. The 2020 C-USA Basketball Championships will take place March 11-14 at Ford Center at The Star in Frisco, Texas.

Changes to the exact game dates could still occur to accommodate the broadcast schedules of C-USA’s television partners. Game times will be announced at a later date, according to a release.