‘Fit for duty’: A morning working out with WKU officer Tim Gray 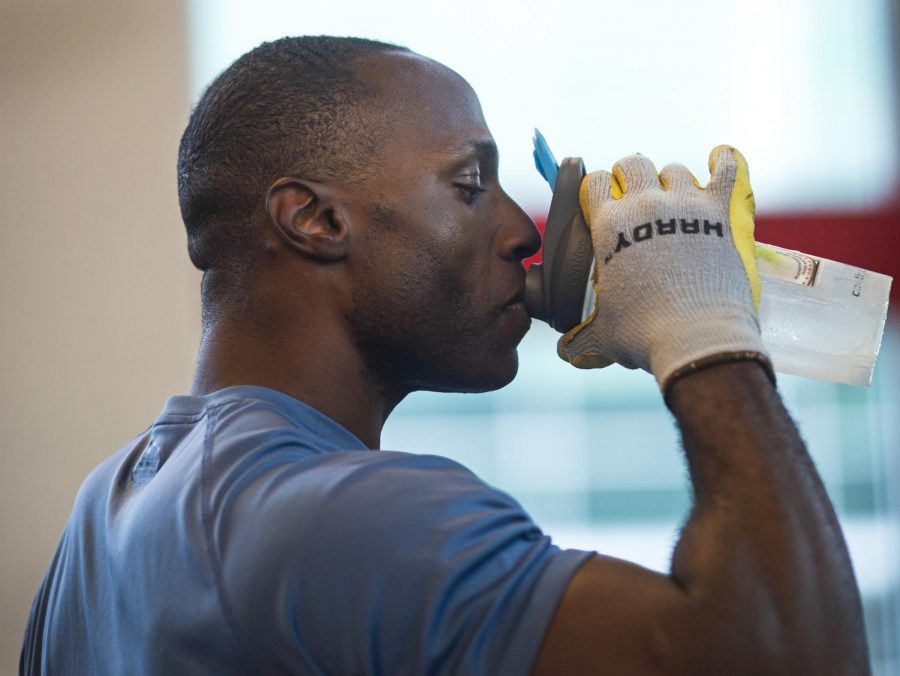 It’s no fun to wake up before daybreak. It’s another beast when exercise is the first thing on your mind.

That was my excuse as I turned off one phone alarm and set another. After all, wouldn’t an extra 15 minutes of sleep make waking up just a little easier?

Nope, but there was no turning back now.

I would be meeting officer Tim Gray of the WKU Police Department in less than an hour to sweat and struggle through one of his workouts. If you’ve ever seen Gray, you can imagine that’s no easy task.

A former college football quarterback at Carson-Newman University in Jefferson City, Tennessee, Gray treats physical fitness as nonnegotiable. Monday through Friday every week, you can spot him in the Preston Center as early as 6 a.m.

For me, on the other hand, exercise is best when crickets aren’t chirping.

Teeth brushed and dressed in my most comfortable WKU dry-fit T-shirt, I made the lonely trek to Preston. Aside from a banana I ate along the way and a quiet drone of maintenance vehicles making their morning rounds across campus, I would’ve thought it was nighttime.

The thought, “I’d rather be asleep,” tore at me as Preston came within view. Though I’ve frequented the fitness center every semester of my now seven-semester journey as a Hilltopper, this time would be different.

Waiting outside of the center, stretching intermittently and preparing mentally for a war my body and sleep deprivation would soon declare, I suddenly saw a bicycle headlight zip its way toward the center. Oh god — Gray had made his entrance.

“Y’all ready to roll?” Gray immediately said to me and the reporter tasked with videoing my inevitable demise.

Only minutes past 6 a.m., Gray showed no signs of exhaustion, enthusiastically greeting fitness center staff and acting with a general sense of could-wrestle-a-large-animal readiness. He calls this a “rise-and-grind mentality.”

“It’s just me, the radio, the fans,” Gray said about working out so early. “It’s for the crazy folks.”

As this day of workouts would be centered around legs — a traditionally challenging muscle group to exercise effectively — we would need every ounce of grit we could muster.

Fresh off hamstring and hip stretches, Gray quickly revealed this workout was not the easing-into type. Beginning with a hamstring- and quadriceps-intensive regimen of single-leg extensions, dual-leg extensions and lying leg curls, Gray’s focus was volume.

In the world of exercise enthusiasts, such a combination is known as a “tri-set,” one of the most hair-raising concepts in fitness vernacular. A quick note about myself: as a daily exerciser since 2007 and former state champion powerlifter, I can promise you tri-sets are no joke. Never have you felt muscle burn until you’ve dug your sweaty forehead into the vinyl upholstery of a lying leg curl machine, all muscles clenched tight as you perform shaky repetitions and pray your hamstrings don’t snap like a Kit Kat bar.

That was me as I followed Gray set by set. Though he added weight to every exercise with each passing set, I hardly managed to keep my weight the same, falling victim to the slow but sure sapping of strength a tri-set is notorious for.

It’s around that time you question whether you should push forward or walk away. For Gray, the thought of his mother and WKU students keeps him in the gym when his bed starts to sound more and more like a Hawaiian vacation.

“If you quit when things get tough, what else would you quit on?” Gray said.

Arriving on the Hill in 2004 with intent to join the WKU football team, Gray got involved as a resident assistant at Barnes-Campbell Hall, eventually becoming a hall director, and didn’t look back. It was then he discovered how much he enjoys helping students achieve.

“I have a passion for seeing young people succeed,” Gray said.

Graduating from WKU in 2006 with a bachelor’s in communications studies and a minor in athletic coaching, Gray went on to receive a master’s in student affairs at WKU in 2010.

The WKUPD was recruiting Gray for a life in law enforcement.

However, as a youth in Hillsboro, Tennessee, Gray had seen too many negative run-ins with officers. He wanted no part.

It took a conversation with his mother, a former correctional officer, and a realization for Gray to change his mind. If he was truly committed to WKU’s students, why not represent and serve them as an officer, he thought.

Starting police academy training in 2010, Gray became a certified officer by June 2011, graduating from the academy with a “fit for duty” honor. A recognition bestowed on less than half of his fellow academy graduates, he said he continues training as seriously as ever to ensure he remains fit for duty and fit to serve his community.

Narrowly surviving the muscular massacre that was Gray’s leg-day tri-set, we moved on to an even more daunting foe: a squat performed on a front squat machine. Placing a towel over the machine’s headrest, Gray faced the machine inward and performed squats to a depth many exercisers merely dream of.

Despite this, Gray claims his days of working out with heavy weight are in the past. Compared to the over 500-pound back squat Gray once completed for five repetitions or the 440-pound bench press he once hit for three repetitions — incredible numbers for a man not even 5 foot 11 inches tall and just over 210 pounds of body weight — maybe he’s right.

When compared to the 450 pounds of weight I mustered on my last set of the front squat machine, though, I think Gray’s strength speaks for itself.

At just under two hours of exercise, the workout was finally finished. We only completed a total of four distinct exercises during the time span, but each was more than enough to convince me Gray is more machine than human.

When he’s not lifting the equivalent of a male polar bear, however, Gray enjoys playing Playstation 4 games like “Tom Clancy’s Ghost Recon” or eating “cheat” meals of pancakes, turkey sausage and scrambled eggs on the weekends.

Though working out or living like officer Tim Gray isn’t for everyone, he can’t imagine any other way.

“Always shoot for the top,” Gray said, “because it’s the bottom that’s crowded.”