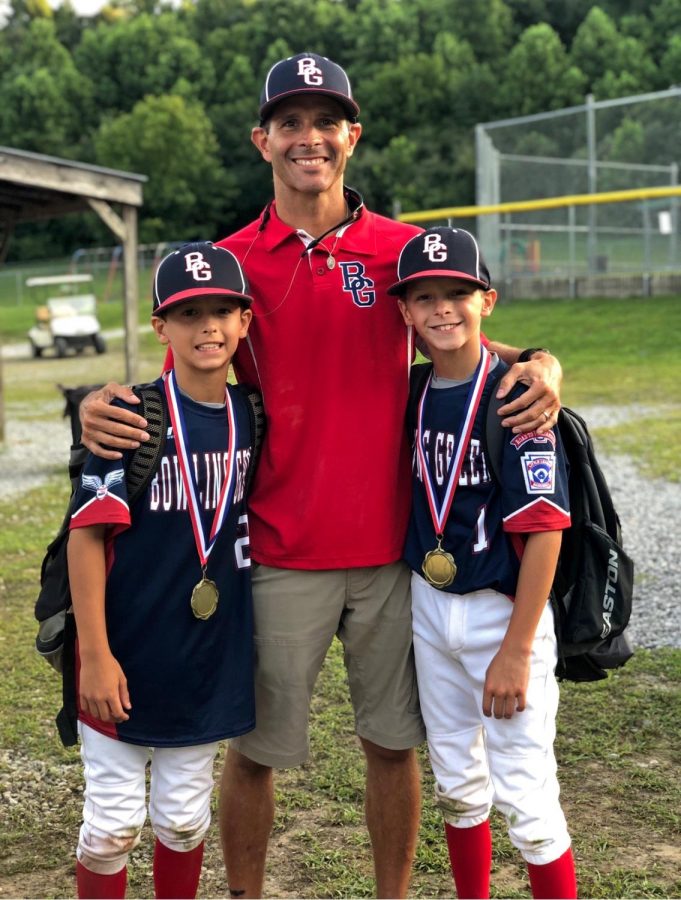 The victory sealed BG East’s fate — its third Little League World Series appearance since 2015. Following all the games and tournaments the team had played all year long, their final destination was Williamsport, Pennsylvania.

The 2019 LLWS was held from Aug. 15-25, and the winner of the Great Lakes Region played in three contests during the tournament. Throughout the team’s experience, the young athletes were exposed to large crowds, signing autographs and staying in a dormitory with competing teams.

“For the most part, these players have been together since they were 7 and 8 years old,” Idlett said. “We have always had our eyes set on Williamsport. It’s hard to describe how high quality the event is. To play in front of 25,000 fans, to be on ESPN, sign autographs and ride on a bus with the Chicago Cubs and Pittsburgh Pirates is just so neat.”

Idlett played as a third baseman for the Hilltoppers from 1995-99 and graduated with his business administration degree. Today, the former baseball player is married and has four children, including twin boys who are members of the BG East team.

Jackson Idlett and Luke Idlett both played roles that contributed to the team reaching the LLWS. Luke — who played infield, center field and pitched — started every game, while Jackson usually came off the bench, their father said.

The team’s road to Williamsport had three significant pit stops along the way.

BG East first had to defeat Owensboro Southern to win the district. The team later won the state tournament in Prestonsburg before rattling off three games in a row against teams from Michigan, Indiana and Illinois at the Great Lakes Regional Tournament in Westfield, Indiana.

“In 2015 and 2016 we got a bye in the first round of regionals, including this year,” Idlett said. “We won three in a row and defeated Illinois in the championship to go to the Little League World Series. Once we got past regionals, the pressure was off. The director told us that the next place after the World Series was home.”

To the players on the team, there was a significant joy that came with clinching a trip to the LLWS — honoring Mason Goodnight, their teammate who unexpectedly died from bacterial meningitis on April 6, 2017, at the age of 10.

“These boys have been friends since they were 5 and 6 years old,” Jef Goodnight, Mason’s father, said. “They have always played with Mason on the field and in their hearts since he has passed.

“I love how they keep him in their hearts and they always remember him. We have always kept Mason’s jersey in the dugout since he has passed away. It’s just a fixture in our dugout and that is something that touched me and my wife Janet’s hearts.”

“Having Mason spiritually on the team was a big boost both from a motivation standpoint as well as a calming effect,” Kelley said. “One of our goals was to tell the Mason Goodnight story and we were able to do that in front of a national audience.”

The opening game loss put BG East in an elimination game on Aug. 17. New England Region champion Barrington (Rhode Island) met BG East in front of an estimated 24,000 fans for a contest that was nationally televised on ABC.

BG East fell 6-1 to the New England Region representatives, which subsequently eliminated the squad from tournament play. Luke Idlett had the lone RBI of the game for BG East to drive in teammate Jameson Napper.

“The kids were upset after losing to Rhode Island,” Idlett said. “The neat thing about being a 12-year-old boy is that it took about an hour and you would have never known they had just played a game.”

The third and final game of BG East’s trip to Williamsport was an exhibition against Cronulla Little League (Australia). After a combined total of four hits in the previous two games, the Great Lakes Region representatives found their stride on Aug. 19.

BG East tallied six hits on its way to a 4-1 victory. Jackson Idlett led the team with two hits, while Chaze Huff pitched a complete game and tossed six strikeouts in six innings.

BG East was also proud to honor the Playing for Mason Foundation, which was created after Mason Goodnight’s untimely death two years ago. The foundation has gone on to raise $125,000 to benefit various programs for kids in Southcentral Kentucky.

Although the team’s time in Williamsport didn’t turn out how they would’ve liked, BG East viewed its run as a success because it carried on a fallen teammate’s legacy.

“I know they are all going to go on and do great things,” Jef Goodnight said. “The one thing I also know is they will always have the number 11 and Mason Goodnight with them wherever they go for the rest of their lives.”