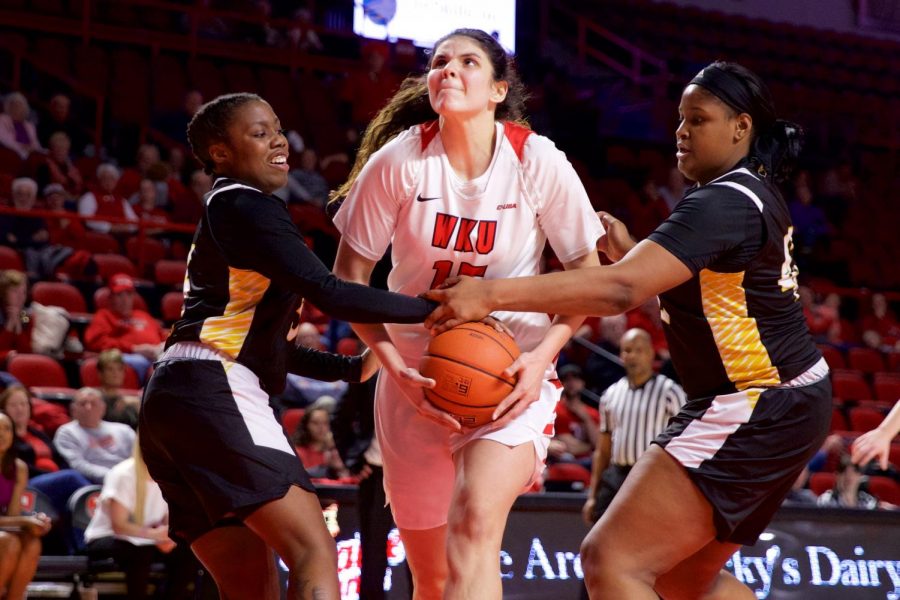 The Lady Toppers will play host to 14 home games inside Diddle Arena and will be led by second-year head coach Greg Collins.

WKU will open the regular season with five consecutive contests against 2019 NCAA Tournament opponents, three of which will be home matchups.

The Lady Toppers will face off with Oklahoma on Dec. 4 to round out their non-conference home schedule before welcoming nine Conference USA opponents to Bowling Green after Jan. 1.

The Lady Toppers will open the season looking to extend their winning streak in exhibition matchups to 36 games when they play Kentucky Wesleyan on Halloween night. Last season, WKU secured its 35th consecutive exhibition win by a score of 104-74 over West Virginia State.

WKU will battle in-state rival Louisville in the KFC Yum! Center in the regular season opener on Nov. 5. The Lady Toppers will hope to avenge their 102-80 loss to the Cardinals last season at home. The Cardinals are coming off an impressive Elite Eight finish last season; however, the Lady Toppers lead the all-time series 25-21.

The Lady Toppers will hit the road again three days later to face off with the Mercer Bears on Nov. 8. Mercer has won an astounding 80 games over the past three seasons, including a 30-win campaign during the 2017-18 year.

WKU will then proceed through its tough non-conference schedule by hosting more 2019 NCAA Tournament teams — Belmont on Nov. 13, Central Michigan on Nov. 17 and Little Rock on Nov. 24. The Lady Toppers have won eight straight against Belmont, but split games against CMU and Little Rock in 2018-19.

The Lady Toppers will later head west to compete in the Saint Mary’s Thanksgiving Classic. WKU will face Tulsa and Saint Mary’s during the event. The program will look to secure its first in-season title since the 2017-18 season against two teams WKU has never met on the hardwood.

The Lady Toppers will follow their home bout with the Sooners on Dec. 4 by travelling to Ball State on Dec. 7, Samford on Dec. 15 and Purdue on Dec. 18 to round out the team’s tough non-conference slate.

WKU will start back up after a two-week holiday break by travelling to North Texas on Jan. 2 and defending league champion Rice on Jan. 4 to begin its C-USA campaign. The Lady Toppers split their meetings with the Mean Green last season, but they lost to the Owls twice, including in the semifinals of the C-USA Tournament.

The Lady Toppers will return home for contests with UAB on Jan. 9 and rival Middle Tennessee on Jan. 11 inside Diddle Arena. The bout with UAB will be a rematch of the 2017-18 C-USA Tournament championship game won by the Lady Toppers, and WKU will also look to extend its home winning streak over the Blue Raiders to six games.

Three straight roads games follow, as WKU will travel to Old Dominion on Jan. 16, Charlotte on Jan. 18 and Marshall on Jan. 25. The Lady Toppers went 5-0 against these three opponents last season by collecting a pair of wins over both Old Dominion and Marshall.

The following week, Florida Atlantic and Florida International will visit WKU. The Lady Toppers have proven their dominance over schools from Florida by posting an all-time record of 48-11 against them and a 12-0 record against the Owls and the Panthers since they joined the league in 2014-15.

WKU will face yet another tough road trip by travelling to Louisiana Tech on Feb. 6 and Southern Mississippi on Feb. 8. The Lady Toppers hold a 6-0 record against the Lady Techsters since joining C-USA, but the Golden Eagles snapped WKU’s streak of 22 consecutive home C-USA wins a year ago.

The Lady Toppers will complete their final three games before beginning the new season-ending format by hosting three teams WKU had an undefeated record against last season — Texas-El Paso on Feb. 13, Texas-San Antonio on Feb. 15 and Marshall on Feb. 20.

No later than Dec. 15, the conference will predetermine the remaining four games of the season by considering the most competitive matchups along with geographical restraints.

The 2019-20 C-USA Championships will take place at The Ford Center at The Star in Frisco, Texas, from March 11-14. The event has been held in this arena for three straight years and will again determine the winner of the league’s automatic bid to the NCAA Tournament.

Finalized game times for the season will be announced at a later date, according to a release.