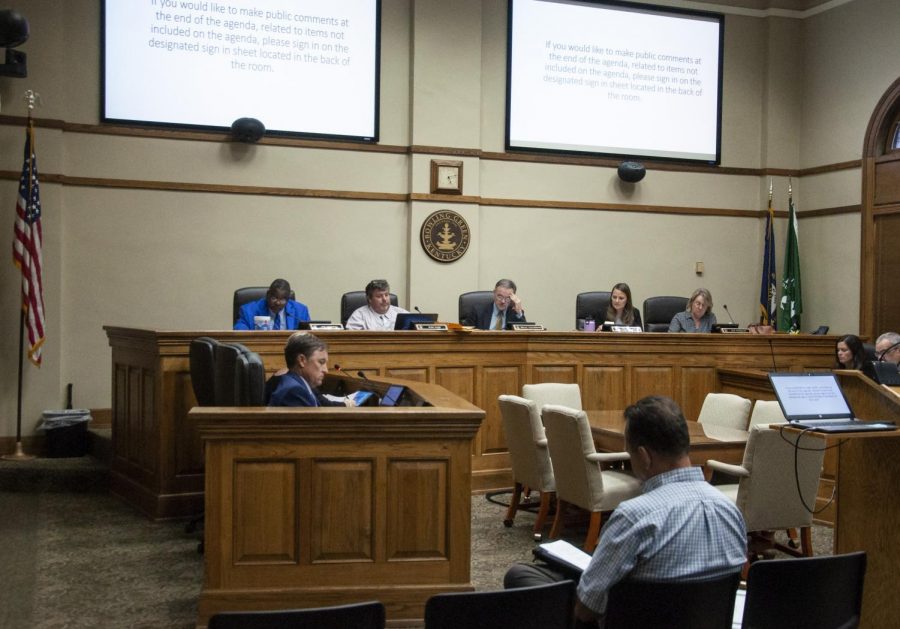 City Commissioners of Bowling Green hold the second regular meeting of the month of August at the commission chamber on Tuesday, August, 20, 2019.

In a unanimous vote, the Bowling Green City Commission passed an ordinance on first reading to allow for the issuance of industrial building revenue bonds to the WKU Student Life Foundation Inc.

The ordinance will allow for $42 million worth of bonds to be allocated to the Student Life Foundation to help fund construction for the First Year Village project.

“These bonds are not a debt to the city,” said Bowling Green City Manager Jeff Meisel at the meeting. “This is debt that will be paid for by the Student Life Foundation’s revenue stream and revenue bonds.”

The bonds will be issued no later than 45 days after the final approval of the ordinance, which will take place at the city commission meeting on Sept. 3.

The First Year Village is an ongoing construction project designed to replace Bemis Lawrence and Barnes-Campbell Halls with two new residence halls, which will feature a “pod-style” layout of around 25 students who share similar fields of study living together.

With that layout, students will share bathrooms and kitchen and community space, according to the First Year Village website.

In his speech at the fall convocation Monday, WKU President Timothy Caboni touted the First Year Village and its “pod-style” layout.

“Imagine this,” Caboni said in the speech. “If you’re a first-year student at WKU, you enter not with 3,000 classmates, but with 25 who share your academic interests. With a peer mentor to guide you. With courses that are block scheduled with two and three classes taken together with the same 25 people.”

This is not the first time WKU has received bonds from the City of Bowling Green. According to a 2010 ordinance, the University received bonds to fund the renovation of Diddle Arena. The bonds totaled almost $30 million in value, according to the ordinance.