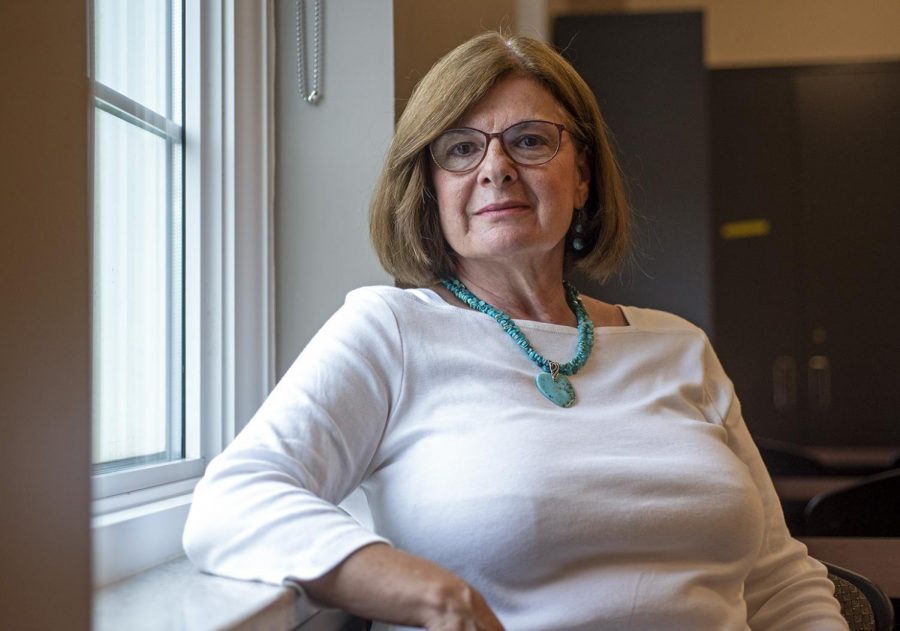 Ann Mead poses for a portrait at her classroom in Gary Ransdell Hall on Monday, Aug 26, 2019. Mead is now teaching at the School of Professional Studies, but before that she was vice president for finance and administration.

Ann Mead will tell you she flunked kindergarten.

When Mead was in third grade, the principal and the guidance counselor at her elementary school told her parents to pick out a vocation for their adopted daughter because she wasn’t smart enough to even finish high school.

Before she was adopted at the age of 5, Mead lived in four foster homes in New York, something she said created challenges for her as a young child. Mead credits the couple who adopted her, the late John and Yvonne Mead, with helping her overcome those challenges.

Despite the odds and the warnings from her elementary school, Mead went on to graduate from high school — and to earn her bachelor’s and master’s degrees.

On June 30, she retired from a 44- year career in higher education — 25 of them spent at WKU, running the financial side of the university for most of that time.

Mead moved several times from ages 5 to 12 as her father switched careers from working at General Electric to teaching. The Mead family moved when her father earned his master’s degree, again when he earned his doctorate, and they landed in Louisville when he became an economics professor at the University of Louisville.

When Mead was in her early teen years, her father would bring her along to his classes. She would sit and watch him lecture, fascinated with his teach– ing and the college experience.

When she started her own college experience at the University of Louisville, Mead declared a major in journalism.

“I loved to write; I had no idea I had any affinity with numbers,” Mead said. “I was OK on math, but I didn’t actually think I had a love for numbers.”

At the end of her freshman year, Mead made a sudden change — she chose to pursue marketing rather than journalism, all because of a foreign language requirement.

Mead had not had the best experience with French in high school and did not want to study a foreign language in college. Her adviser told her that the school of business didn’t require one, so that’s where she went.

“I could’ve been a poor journalist right now,” Mead said. “I could never retire because I’d never be making enough money to retire.”

When Mead wasn’t studying or in class, she spent her time as a bat girl for the U of L baseball team in the spring of 1974.

During her college summer breaks, Mead’s parents gave her the optionto take classes or get a job. She liked school so decided to take more classes.

Mead graduated from U of L with a bachelor of science in commerce in 1975.

“This kid that wasn’t supposed to make it out of high school — I graduated from college in three and a half years,” Mead said.

As she was finishing up her degree at 20 years old, Mead landed an internship in Frankfort. Her parents told her that meant she would also have to get her driver’s license, something Mead had avoided after she failed her driver’s test on her first try because of parallel park– ing. To this day, she still avoids making a left turn.

Mead’s first job was as a budget analyst at the University of Kentucky. Nine years later, she left UK as assistant budget director. She then spent 10 years as the director of finance for the Kentucky Council on Higher Education, which is now called the Kentucky Council for Postsecondary Education.

Mead wanted to feel that daily connection to the difference she was making in the lives of students; she missed being on a campus.

In 1994, Mead became director of institutional research at WKU. Two years later, she became director of budget and management informationat WKU. When former WKU President Gary Ransdell joined the university in 1997, he gave Mead the position of chief financial officer. Her title changed to senior vice president for finance and administration in 2008.

“For 20 years, we pursued practically a complete rebuilding of the campus, and all of those projects required different types of financing,” Ransdell said. “Some state-funded, some private-funded, some federal-funded, and some done with campus fees through our normal campus budget process. But each of them required focused, professional, creative financing that not only was Ann in the middle of, but in most cases she led.”

During the 20 years Mead worked with Ransdell, she also helped negotiate the purchase of the old Bowling Green Mall, which now houses the Centerfor Research and Development, and in creating the Student Life Foundation, which owns WKU’s residence halls.

“I don’t have a big accomplishment,” Mead said of her time here. “This institution does, and I was just a part of it.”

Ransdell said Mead dedicated her life to her work at WKU and was quick to find financial solutions to problems that came up. She achieved a balanced budget every year. When budget cuts started in 2008, she dealt with it like a professional.

“She had excellent judgment when we had to make very difficult decisions,” Ransdell said.

“She was the consummate professional for that entire 20-year period working with me,” Ransdell said.

Mead likes to reflect on the changes she’s seen over her career, particularly with technology. At her first job, she used keypunch cards to hold computer programs.

“We are so more efficient than we were 40 years ago,” Mead said. “No one recognizes that because we raised our expectations.”

There is more to Mead than her 44- year career in higher education. When

Mead arrived at WKU in 1994, she came as a single parent with a 3-year-old son, Trevor. She left the familiar community of Lexington knowing nothing about Bowling Green.

“I came here and found a great place for me to raise my son, both in this community and at this university,” Mead said. Trevor graduated from WKU and earned a master’s degree in social work at U of L. He is currently a mental health therapist in Harrisburg.

Mead took up fishing and found enjoyment in it while raising her son.

“Fishing was just one of those things that I found allowed you to separate yourself from the work environment,” Mead said.

Mead also has three dogs and a cat, all of whom are rescue pets. Once she retires, Mead is thinking about getting involved with a dog rescue train — an effort to get dogs to owners who are far away from where they were found. She previously drove dogs from Bowling Green to Elizabethtown.

Football and basketball are interests she has always shared with her son, especially at WKU. However, she wasn’t always the Lady Toppers basketball fan she is today.

“I was probably passively interested till I met Coach [Greg] Collins and his family, and I love them dearly and his contagious enthusiasm,” Mead said. “I love what Coach Collins brings to the program, and his family’s wonderful.”

Collins’ kids call Mead “Auntie Ann,” and she spends time with his wife, Rae. Greg Collins said that Mead is important to the family, and his kids don’t really see her role as a vice president at all. “They could care less about her job,”

Collins said. “They want to know does she have gum, does she have a surprise or a present for them, and can they play with her at the basketball game. That’s kind of how they view her as Auntie Ann.”

Collins said that Mead is a very knowledgeable person, but it’s more than that. She “wears a lot of hats” he said, and she’s a well-rounded person. She is also willing to help with whatever needs her help, he said.

That willingness to help will drive many of Mead’s retirement plans.

She admits there’s no handbook to retirement, but her steps will include a board appointment with an upcoming program at WKU called LifeWorks and teaching one university experience class in the fall.

She’s been teaching on and off for 10 years. Some of her former students have kept in touch with her. One has just finished law school, another student works for Nissan USA, and another reached out to Mead for help to return to college after having left school for a couple of years. She says they’re all on the list of her biggest accomplishments.

After a long career and reaching one of the highest positions at WKU, Mead said helping students who need it — just as she once did — will be her way of saying thank you to those who helped her and “paying it forward.”

News reporter Lily Burris can be reached at 270-745-6011 and lily.bur- [email protected] Follow her on Twitter at @lily_burris.