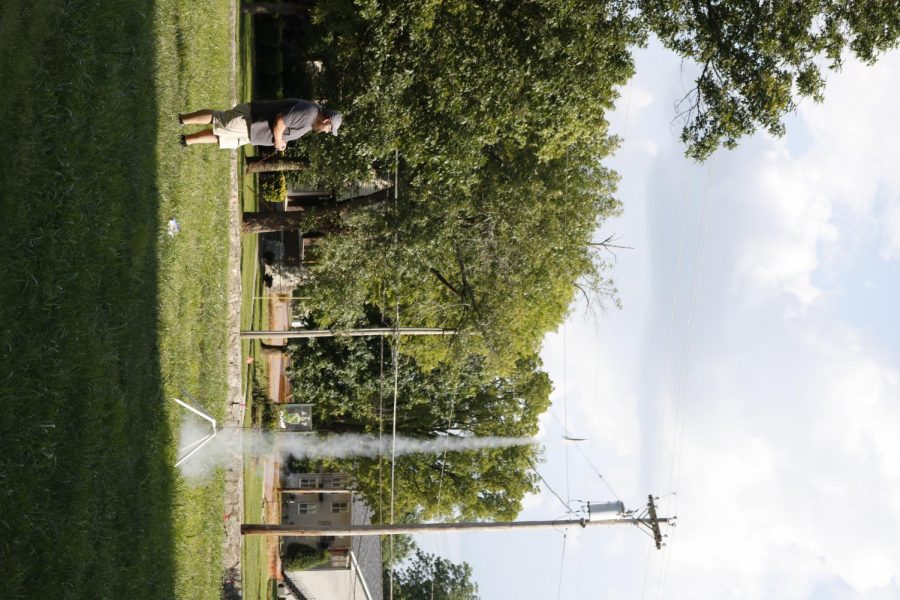 Ecil Miller, Drakes Creek Middle School science teacher, launches a model rocket on the lawn behind Snell Hall as a part of the Moon Landing Celebration.

Man landed on the moon 50 years ago as a part of the Apollo 11 mission. On Saturday, WKU hosted the Moon Landing Celebration at the Hardin Planetarium.

The Moon Landing Celebration included a variety of events, such as the planetarium show “Max Goes to the Moon”, various movie screenings throughout the day and a moon landing related trivia contest. People really showed up for the Moon Landing Activity Festival.

“Events like this I think are critical to getting the next generation of kids interested in and exposed to science,” said Michael Carini, department chair of physics and astronomy and director of the Bell Observatory.

Events at the Moon Landing Activity Festival included lining up the correct phases of the moon, throwing water balloons at the concrete to recreate craters and a telescope petting zoo, which allowed members of the community to interact with a variety of telescopes. Jacob Dobler, a senior physics major from Bowling Green, helped at the telescope petting zoo to help the scientific community reach out to the next generation.

“(The moon landing is) a large leap in human technology and what we’re capable of doing,” Dobler said. “It proves that we can surprise ourself.”

The festival was set up in the shade of Kelley Thompson Hall, Ogden College Hall and Snell Hall. Volunteers stood in the heat and interacted with people of all ages to help them learn about the moon and the moon landing in an interactive way. Richard Gelderman, a physics and astronomy professor and director of the Hardin Planetarium, said he wanted this event to be outside even after addressing his own concerns about the heat. He was impressed by the energy at the event.

“The heart of this in my mind has always been this energy in these exhibits,” Gelderman said.

The energy of the event was displayed in the curiosity of the people who learned about gravity on the moon and the facts and fiction relating to the moon itself. One station was a scale model of the lunar landing site, which included the pathways that the first men on the moon took. John Wulff, a rising senior at Bowling Green High School, volunteered at this event due to his love of space.

“I think it’s so cool to see the actual path they took,” Wulff said.

The Activity Festival ended with rocket launching. One of the stations at the Activity Festival allowed participants to build rockets out of paper, tape, and foam. The rockets are launched with a compressed air launch rail. Ecil Miller, a science teacher at Drakes Creek Middle School and a volunteer at the event, started doing this version of rocketry about three years ago as one of the projects in his class.

“It’s awesome we made it to the moon, it’s awesome that there’s footprints on the moon now but it’s all of the little stuff that came along with it that I think is more important and actually impacts us more than the actual moon landing itself,” Miller said.