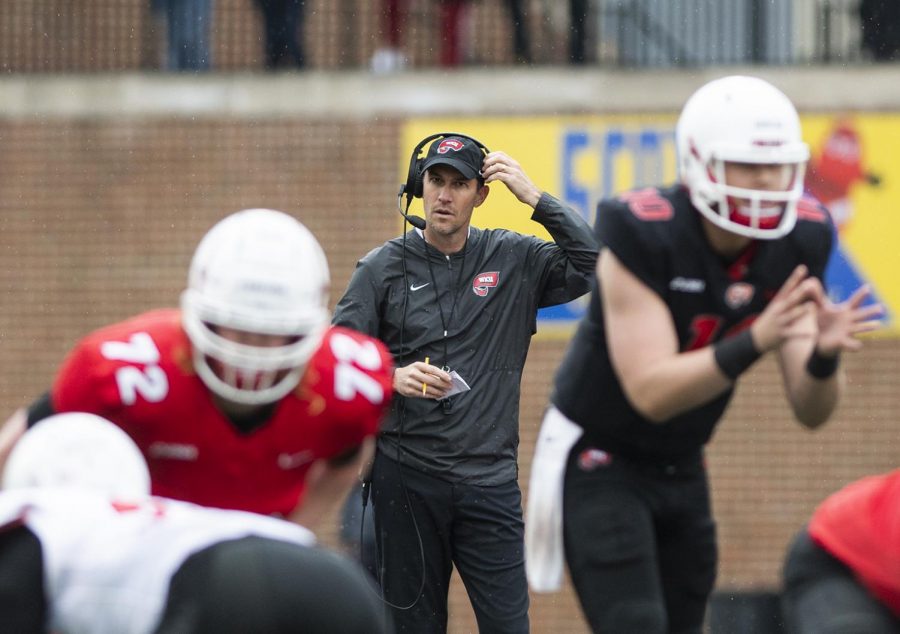 WKU head football coach Tyson Helton observes a play during the Red vs White Spring game on April 13. "We're right where we need to be at this stage," Helton said. "The summer time will be really important for us, that's the next step in the process." CHRIS KOHLEY/HERALD

With the 2019 college football season right around the corner, another Hilltopper brought in preseason honors on offense.

Pate was also one of eight Hilltoppers named to the 2019 All-C-USA Team in Athlon Sports’ annual college football magazine on May 23.

Pate, a native of Lawrenceville, Georgia, started all 12 games as a redshirt junior in 2018, including being on the field for 893-of-898 possible snaps.

Pate was among the best right tackles in C-USA last year — garnering a +21.8 overall rating according to Pro Football Focus College’s Signature Stats, which included +9.5 for pass blocking and +8.9 for run blocking. In addition to his stellar ratings for blocking, Pate was called for only one penalty all season.

“Similar to former Western Kentucky standout Forrest Lamp, Pate plays tackle but projects as an interior lineman at the next level,” Feldman wrote in his write-up about Pate. “The 6-2, 314-pounder will be a three-year starter thanks to his terrific agility. He has a 31.5-inch vertical. His 4.50 short shuttle would have tied for second-best among O-linemen at this year’s NFL Combine. His 1.77 10-yard split also would have been one of the better times in the position group. WKU strength coach Jason Veltkamp says Pate moves like 290-pound Patriots lineman Joe Thuney (whom Veltkamp coached at N.C. State), but it’s even more freakish when you account for the fact that Pate is 314.”

WKU returns 10 starters on offense, which ranks as the most returners in the nation. Pate and the rest of his WKU teammates will open the 2019 season at home against Central Arkansas on Aug. 29.