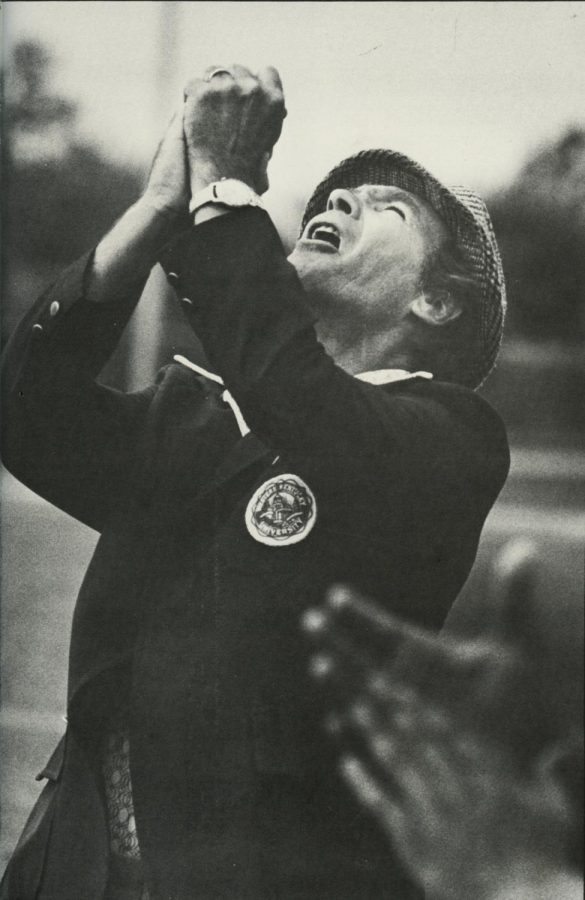 Jimmy Feix off ers thanks for a face mask penalty against East Tennessee State University in 1977. Feix was part of the football coaching staff for 24 years, serving 15 years as head coach. JIM BURTON/TALISMAN FILE PHOTO

Former WKU football coach Jimmy Feix will be on the 2020 ballot for induction into the College Football Hall of Fame, the National Football Foundation & College Hall of Fame announced today. Feix coached the Hilltoppers from 1968-1983 and is the program’s all-time leader in wins with 106.

Feix will be one of 33 coaches from the divisional ranks on the 2020 ballot.

The Henderson, Kentucky, native arrived at WKU in 1949 as a freshman football player, kicking off a career on the Hill that would end up spanning several decades.

The New York Giants drafted the college stud, but Feix suffered a career-ending injury in the 1953 preseason. Following four years of Air Force service, Feix returned to WKU as an assistant coach in 1957 and served in that capacity for the next eleven years.

Feix was also named Kodak College Coach of the Year for Division II in 1973 and 1975 after the Hilltoppers were national runners-up both years.

Following his retirement from coaching in 1983, Feix spent two years working in alumni affairs. Feix then succeeded the retiring John Oldham — the namesake of WKU’s basketball court — as athletic director in 1985, serving in that role for five years before retiring for good in 1990.

The winningest coach in school history, Feix was a charter member of the WKU Athletic Hall of Fame in 1991, and the playing surface at Houchens-Smith Stadium was also named in his honor that same year.

Along with fellow former quarterback and WKU head coach Willie Taggart, Feix was one of the first two football athletes to have their jerseys retired in 1999. Feix passed away at the age of 83 on Oct. 5, 2014.

The 2020 Class will be announced in the days leading up to the College Football Playoff National Championship in January, according to a press release. Honorees are slated to be inducted during the 63rd NFF Annual Awards Dinner at the New York Hilton Midtown on Dec. 8, 2020.