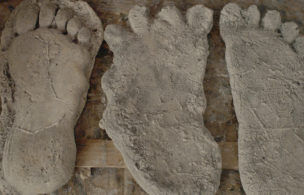 Charismatic journalist David Holthouse never forgot the chilling story he heard one night while visiting Northern California in 1993: Nearby, three men had been dismembered in an attack allegedly carried out by that mammoth creature from American folklore, Bigfoot. In the bingeable three-part documentary Sasquatch, Holthouse returns to the area 25 years later to find out what really happened.

The search, he says, “became a journey through the dark heart of the backwoods dope business and an exploration of the ancient human tradition of ascribing evil deeds to supernatural forces.” As one might expect, the legendary monster becomes a less likely suspect as Holthouse uncovers even more crimes. His risky investigation is peppered with “squatchers” (folks obsessed with finding the creature), paranoid weed farmers and a spooked private investigator.

“Asking questions about unsolved homicides was a roll of the dice every time,” Holthouse says. “I was constantly on guard against joining the legion of the vanished.”