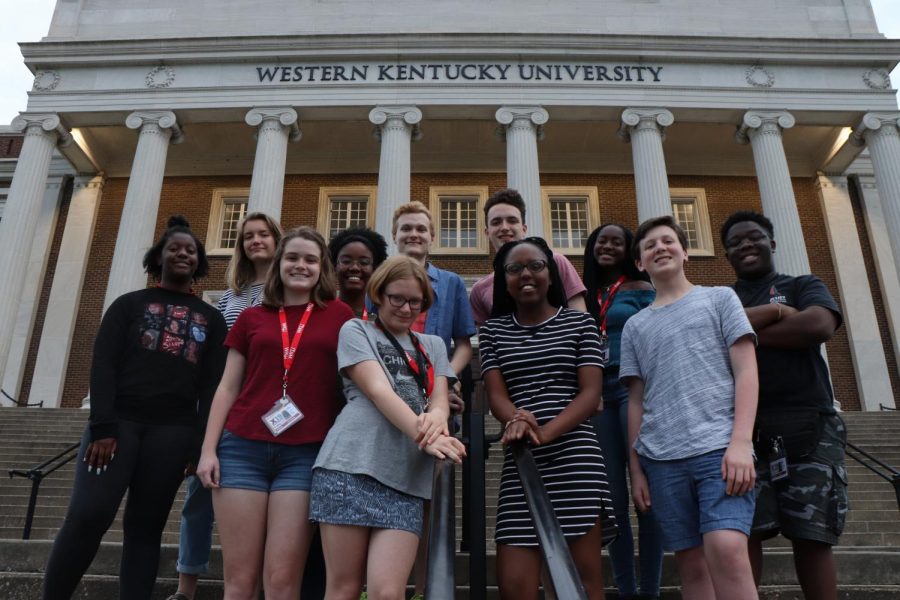 The 11 students from the Xposure High School Journalism Workshop 2019. These students spent nine days learning how to improve their journalism skills through writing and editing. Each year, student come to this workshop from all across the nation. Sam Upshaw Jr.

The Xposure High School Journalism Workshop brought 11 students to WKU to learn how to become better writers, photographers and videographers. Students come from all over the country and spend nine days working on a print publication and digital stories  that includes student profiles and news items.

Students arrived June 8 and began to move in with a bunch of strangers, but by the end of the week, they weren’t really strangers. Makaio Smith, 16, is a rising junior from Atherton High School in Louisville. Smith said that the experience was fun.

“I got to meet a lot of really cool people, got to talk to a lot of people,” said Smith, who was voted Workshopper of the Year by her fellow students. “And then I got to be more social and be more out there, even to random people, which was really surprising.”

Abby Adams-Smith, 15, who is a rising junior from Bowling Green High School in Bowling Green, learned a lot about her writing. Adams-Smith enjoyed meeting everyone from the students to the professionals that come in to help.

“I’ve made a lot of connections here professionally and socially that I wouldn’t have otherwise and that are really valuable to me, so Xposure, it’s just, it’s done a lot for me,” Adams-Smith said.

On June 9, students participated in a variety of activities to improve their writing. Aniya Johnson, 16, is a rising senior who goes to duPont Manual High School in Louisville. Johnson said that she was glad they got to work on profiles because she had had problems writing them before.

“We get to travel to different places and take pictures,” Johnson said. “We get to learn about all aspects of journalism like writing and photography and video, which is very important.”

Students took a tour of the WKU campus on June 10  and also ventured out into Bowling Green and other areas during the workshop. Preston Romanov, 18, a rising senior from Trinity High School in Louisville, said he got to see lots of Bowling Green and WKU, which is different from other camps.

“Here I’ve been able to see really all of WKU, and I actually really like the campus of WKU,” Romanov said. “It’s really pretty nice.”

Students went to Barefoot Republic Camp in Fountain Run, Kentucky, on June 11. For their Limited Edition publication, Chuck Logsdon, 16, a rising junior from Henry Clay High School in Lexington, wrote a piece about the camp. Logsdon said what he learned here helped him become more skilled.

“I think I gained a lot out of it, especially transitions and interviews, those are two things that probably helped the most, but just overall writing like sentence structure,” Logsdon said.

On June 12, the group went to Louisville to visit InsiderLouisville.com, the Courier Journal, Louisville Public Media and its Kentucky Center for Investigative Reporting, and WDRB Media. While there, students such as Sydney Madry, 17, a rising senior from Male High School in Louisville, got a chance to learn about journalism and see what it’s like to be a reporter.

“My time here has been stressful and crazy, but it has been an eye-opener to experience and to learn about the real world of journalism and how it’s gonna be when I actually go into journalism and meet people, interview people,” Madry said.

June 13 was spent at computers, working to put together pieces for the Limited Edition and the WKUXposure.com website. The student ended this day tired from the work and the constant pace of the workshop. Ronald Wagner Jr., 17, a rising senior from Crossroads College Preparatory School in St. Louis, wasn’t expecting to be so tired.

“It was a great learning experience,” Wagner said. “I’ve learned more this week than I have I feel in my whole entire high school career in regards to writing.”

While June 14 was another day spent at the computers, students spent some time going through photos to write captions and possibly saving a few for themselves. Gwen Hatcher, 16, a rising senior at Bowling Green High School in Bowling Green, had fun and made friends throughout the week.

“I’ve had a lot of fun,” Hatcher said. “I’ve made a lot of friends and everybody’s really nice, and the staff is really good too.

During her time here, Henri Aboah, 17, a rising senior from Male High School in Louisville, reconsidered WKU as a top college choice and made friends with the other students.

“It’s been really fun getting to meet all the kids, and I hope that we still talk after the workshop’s over,” Aboah said.

Reflection time came yesterday as students proofread their work before a night out bowling. Students like Kennedy Gayheart, 17, a rising senior at Paul Laurence Dunbar High School in Lexington, realized how they gained confidence in their writing.

“My time here has been really fun, and I’ve learned a lot,” Gayheart said. “I’ve learned how to write better.”

Today was the last day of the workshop. Students got their copy of the Limited Edition publication with their work. Their families came to pick them up and hear about all they had done during the workshop. Noah Grebe, 16, a rising junior from duPont Manual High School in Louisville, gained more confidence in his work and made lots of friends.

“I would just recommend this to anyone who’s like ‘I’m not sure if I should apply,’” Grebe said. “I think everyone should come to this if you’re somewhat interested in journalism because I think it helps a lot.”