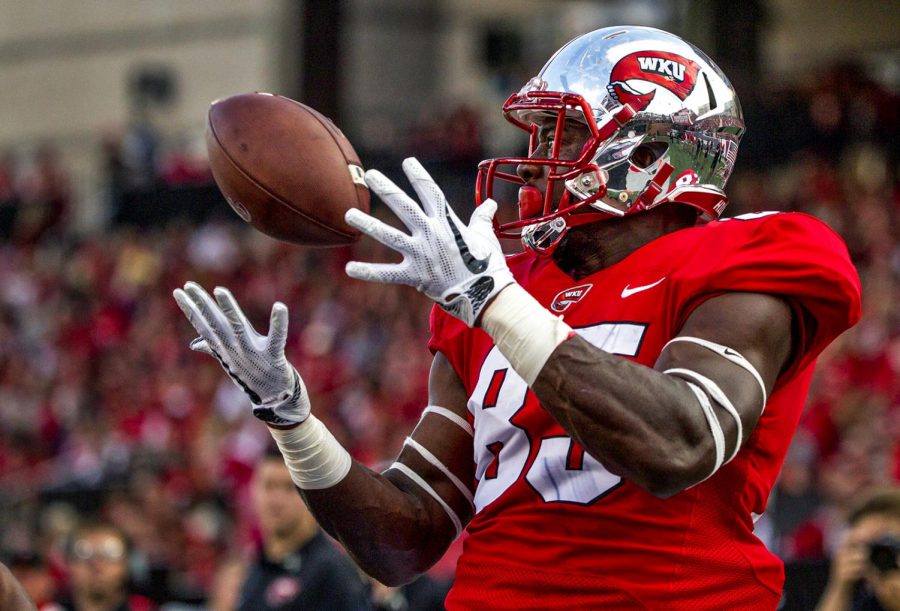 WKU tight end Mik'Quan Deane (85) catches a pass for a touch down at the WKU Homecoming football game on Saturday October 14, 2017 at LT Smith Stadium. WKU won 45 to 14.

Three former Hilltoppers got the chance to continue their football careers at the next level this week, as tight end Mik’Quan Deane, defensive back Joe Brown III and defensive back DeAndre Farris each signed contracts with professional clubs in the United States and Canada.

On Monday, the Ottawa Redblacks of the Canadian Football League officially announced the signings of both Brown and Farris.

Brown last played for WKU in 2017, when he earned a Conference USA Honorable Mention nod after collecting 36 total tackles, two interceptions, two fumble recoveries and a sack as a senior. Farris was a team captain as a redshirt senior in 2018, and he lived up to his billing by tallying a 47-yard interception return, eight pass breakups, 34 total tackles, and 12 starts to lead all WKU cornerbacks.

On Wednesday, the Buffalo Bills were awarded a waiver claim for Deane. Deane originally signed with the Seattle Seahawks as an undrafted free agent, but the team released him on May 13.

Following a two-year junior college career at Northeastern Oklahoma A&M, Deane signed with WKU as a consensus top-100 JUCO recruit. Deane shined during a two-year stint on the Hill, nabbing 55 receptions for 673 yards and five touchdowns in his WKU career.

“All glory goes to God,” Deane told the Herald on April 28. “I never thought I’d see the day where I’d be able to play for an NFL team. I’ve been through so much with my family and stuff and even through junior college I didn’t know that this would be an actual possibility, so it’s a blessing.”

The Bills recently started OTAs and offseason workouts, while the Redblacks just began training camp. The Redblacks are set to begin the preseason against the Hamilton Tiger-Cats on June 1, while the Bills are not going to have rookies and veterans report for training camp until July 25.