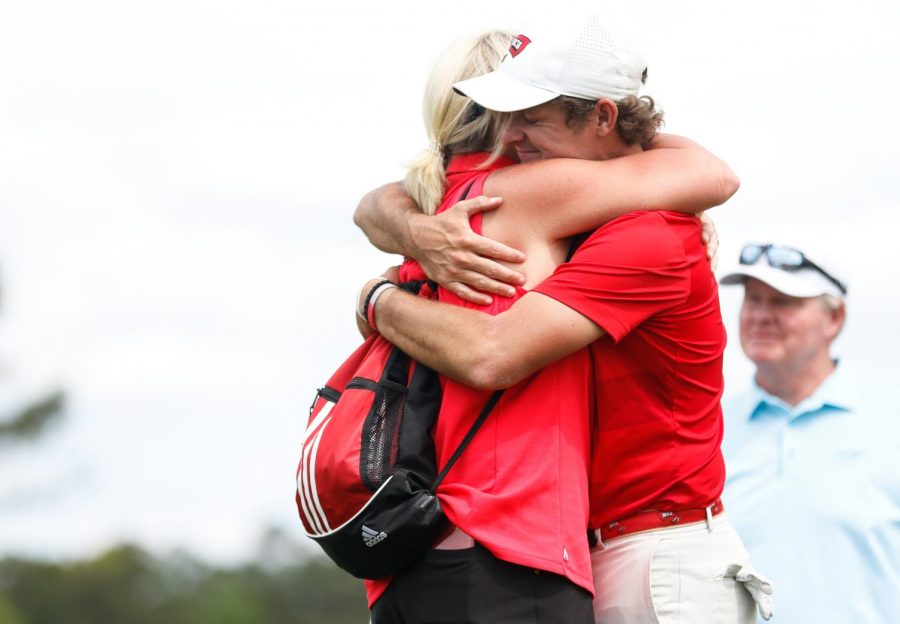 Redshirt senior men’s golfer Billy Tom Sargent celebrates after clinching a berth to the NCAA Division I Men’s Golf Championships on May 15, 2019.

Prior to Wednesday, the WKU men’s golf program had never seen a Hilltopper advance to the NCAA Division I Men’s Golf Championships.

That all changed when redshirt senior Billy Tom Sargent drilled a 30-foot par putt on the third playoff hole against Nevada golfer Stephen Osborne, claiming the lone individual NCAA berth out of the Athens Regional.

Sargent is the first Hilltopper to ever move past an NCAA Regional.

“Making it to regionals was an honor, and I knew it could’ve been my last tournament if I didn’t play well,” Sargent said in a press release. “I just wanted to go out there and give it all I had. I worked pretty hard going into it and felt like my game was where it needed to be. I just wanted to play solid golf. I knew if I stayed patient, made a bunch of pars and mixed some birdies in I’d have a chance.”

With two holes to play in Sargent’s round, Osborne was two strokes ahead of the Georgetown native. But the Hilltopper finished with two birdie putts and forced the sudden-death playoff round.

“Making that putt and knowing it forced a playoff was an incredible feeling,” Sargent said in a press release. “I didn’t really make a lot of birdies this tournament, but birdieing the last two to force a playoff was a pretty good feeling.”

After posting the lowest 54-hole NCAA Regional score in program history with a 210 (71-69-70), Sargent will try to channel that same clutch gene as he moves along in the peak of his career.

“Billy Tom played an amazing event,” WKU head coach Chan Metts said in a press release. “Billy Tom is one of those rare players that likes to know where he stands in regards to the leaderboard. That isn’t always the case, but knowing that allowed us to attack the last few holes with a very clear plan as we knew what we needed to force a playoff. The birdie on 17 and 18 to force that playoff was special stuff.

“He hit an incredible 6-iron into 18 and buried that putt, and he did that all knowing birdie was what he needed. I am so proud of what he accomplished this week. It is a great day for Billy Tom, our golf program and WKU. We aren’t done yet – we have more golf to play.”

Sargent finished ahead of 13 of the 16 top 100 golfers in the Athens Regional, including seven in the top 50. He will now look to extend his brush with destiny against 155 other golfers from schools all over the country at the 2019 Division I Men’s Golf Tournament.

The NCAA Championships are scheduled to take place at Blessings Golf Club in Fayetteville, Arkansas on May 24-29. Additional updates from the postseason event can be found here.