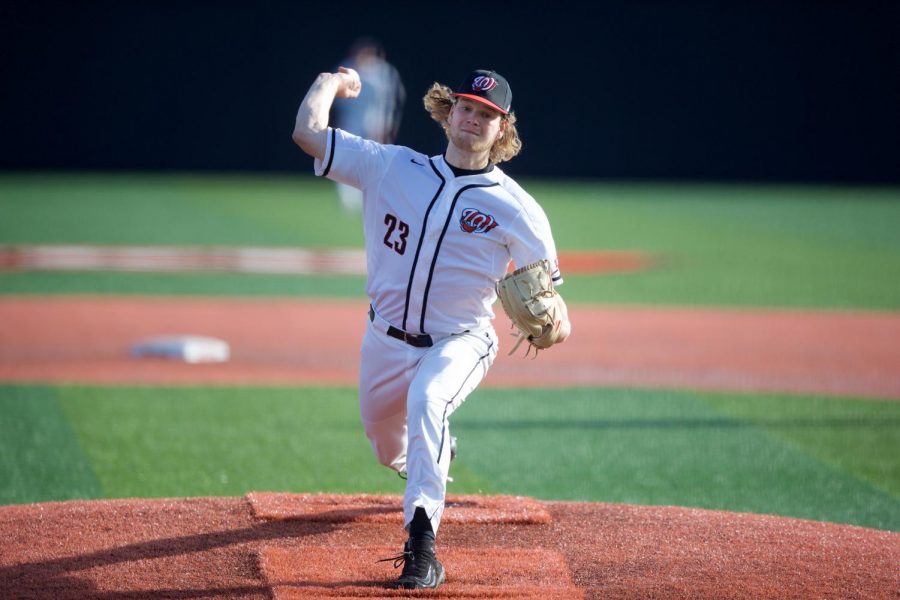 “This is our first go-round, our first opportunity to play in this tournament, and we wanted to make an impression,” head coach John Pawlowski said in a postgame press release. “Who knows? Any team in this tournament can win it, and if you get off to a good start in Game 1, you’re assured of two more games. I felt like we had some really quality at-bats over the course of the game, we kept putting pressure on them.”

ODU got on the scoreboard first, as first baseman Vinny Pasquantino nailed a solo home run in the first inning. But after that mishap, redshirt senior pitcher Reece Calvert kept the Monarchs off the board for the next four innings.

The biggest difference in the game was the Hilltoppers scoring six runs in the fourth inning and one in the fifth, which give them a six-run cushion.

RBI doubles from catcher Matt Phipps and third baseman Sam McElreath gave WKU a 2-1 lead, which was later extended to 6-1 after a two-run single from first baseman Jack Wilson and a a two-run homer from left fielder Ray Zuberer III. WKU tacked on one more run in the fifth inning — a solo shot from junior designated hitter Richard Constantine.

The Monarchs went on to score three more runs, two off of Calvert in the sixth and one off of sophomore pitcher Dalton Shoemake in the seventh.

Compared to the series that happened between these two squads just last week, WKU gave up eight hits in the tournament game after allowing over 10 hits in each game of the regular season-ending series. ODU scored seven runs or more in every game of last week’s series, but the pitching staff for the Hilltoppers only allowed the Monarchs four runs in their tournament game.

“I wanted to go out there and do my best, try to get as many outs as I can and throw strikes. I think they were mostly guessing off-speed — I threw a lot of off-speed the first time I faced them — so we tried to get that fastball in there,” Shoemake said in a postgame press release. “Honestly, I wasn’t focused on how the other games ended, I was just focused on this game.”

“We needed to get something going offensively after we had been shut down in the first few innings,” Zuberer said in a postgame press release. “We got the bats hot and then the pitching came in and closed the deal for us. They’ve struggled at times this year and they’ve bounced back. They struggled last week and they bounced back again. These pitchers are a resilient bunch and I’m so proud of them and I’m proud of this team, and we still have more work to do.”

The Hilltoppers (26-27-1, 16-13-1 C-USA) move on to the second round and will face top-seeded Florida Atlantic in the winner’s portion of the bracket. The Owls won their first-round matchup against Texas-San Antonio, 6-5. FAU (38-18, 22-8 C-USA) finished the regular season with the best record in the conference to get the one seed. WKU lost the season series against FAU earlier this year, 2-1.

First pitch from MGM Park in Biloxi, Mississippi, is set for 7:30 p.m. Thursday, assuming there are no delays. WKU was slated to play at the same time last night, but the game was pushed back several hours — it started at 10:31 p.m. and ended at 1:46 a.m.