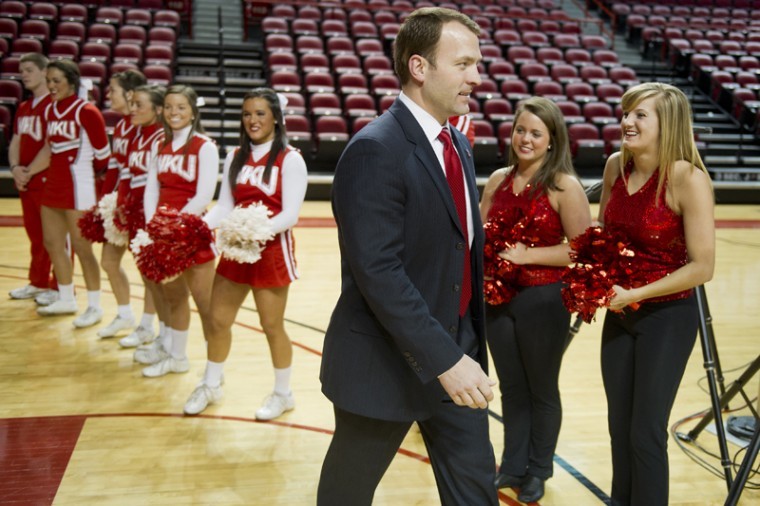 A little more than nine years after WKU made Ross Bjork the youngest athletics director of the 120 NCAA Football Bowl Subdivision programs, the 46-year-old AD is leaving his post at Mississippi to take the same position at Texas A&M, the school announced Thursday night.

“I am so honored to accept this position and look forward to greeting coaches, staff and the entire 12th Man,” Bjork said in a press release. “I remember visits to Kyle Field even before its massive renovation, being enthralled with the whole environment. I love leadership lessons, especially in military history; The Corps of Cadets – the “Keepers of the Spirit” – are also a wonderful draw to the university. I will always aspire to live up to the core values that the university holds dear, and to compete for and win championships.”

Bjork will be formally introduced at Texas A&M on June 3 and begin work there on July 8. Bjork will be part of the AD carousel currently happening in the Southeastern Conference’s West Division — Bjork is replacing Scott Woodward, who left the Aggies to become the AD at Louisiana State on April 18.

“I am thrilled to welcome Ross Bjork to Aggieland,” Texas A&M President Michael K. Young said in a press release. “His outstanding reputation as a leader will be vital to the continued trajectory of our athletics program. His appreciation for higher education is evident in achieving the highest GPA and graduation rates on record during his tenure at Ole Miss. We look forward to formally introducing Ross in the coming days and also to welcoming his wife, Sonya, and sons, Paxton and Payton, to one of the most hospitable communities on earth. I also want to thank Coach R.C. Slocum, cherished by all Aggies, for stepping in during this time to lead the department. I look forward to continuing to work with him.”

Just over two years into his WKU tenure, Bjork was announced as the seventh full-time AD at Ole Miss on March 21, 2012. Bjork led Ole Miss baseball to its first College World Series appearance in 42 years in 2014, and the Rebels also went to two New Year’s Six bowl games under his tutelage.

Freeze was not Bjork’s first brush with controversy — former WKU defensive coordinator Lance Guidry was arrested for driving while intoxicated in Baton Rouge, Louisiana, on Nov. 12, 2011. Guidry coached WKU in its 42-9 loss to No. 1 LSU later that same day, and Bjork never suspended him at any point, although Guidry was punished. According to a Herald editor’s note, the charges against Guidry of DWI, improper lane usage and reckless driving were expunged under a court order dated Sept. 12, 2014.

Prior to Bjork’s seven-year stay in Oxford, Mississippi, former WKU President Gary Ransdell gave him his first shot as an AD. Randsell officially hired Bjork on March 12, 2010, and over the next two years, Bjork was involved in several decisions that still have a major impact on WKU athletics to this day.

Bjork also fired former men’s basketball coach Ken McDonald 16 games into the 2011 season, promoting assistant coach Ray Harper to interim head coach for the remainder of the year. After Harper guided the squad to a 2012 Sun Belt Conference Tournament title and a NCAA Tournament win, Bjork promoted Harper to full-time status just before he departed for greener pastures in the SEC.

Stewart got to choose his own women’s basketball coach, but he didn’t get to make his own decision for who the next men’s basketball coach would be until 2016, when he fired Harper and hired current coach Rick Stansbury, who’s failed to make a single NCAA Tournament appearance despite talented recruits.

Following a successful six-year tenure at WKU, former baseball coach Chris Finwood left to take the same position at Old Dominion, which prompted Bjork to promote assistant Matt Myers to head coach in 2011. Myers didn’t pan out, posting a 106-118 record before Stewart fired him and hired current head coach John Pawlowski in 2015. After a rough start to his tenure, Pawlowski guided WKU to its first-ever Conference USA Tournament win this week in his fourth year at the helm.

Bjork also set another precedent Stewart has continued to follow: preemptive raises for athletic coaches. Bjork got former head football coach Willie Taggart a $475,000 salary, which made him WKU’s highest paid employee at the time. Currently, Stansbury makes $650,000 per year after Stewart asked the Board of Regents to raise his annual base salary in January 2018.

Stewart cited Bjork as a major influence on his career, and that influence has been evident — the handful of Sun Belt titles Bjork won in his two-year stay on the Hill laid the foundation for the 37 total conference championships Stewart has claimed in his seven-year tenure as WKU AD.

Although Bjork is now even further away from his old Kentucky home, the former WKU AD’s presence is still very much felt on the Hill — Bjork set precedents and made moves that changed WKU athletics forever.