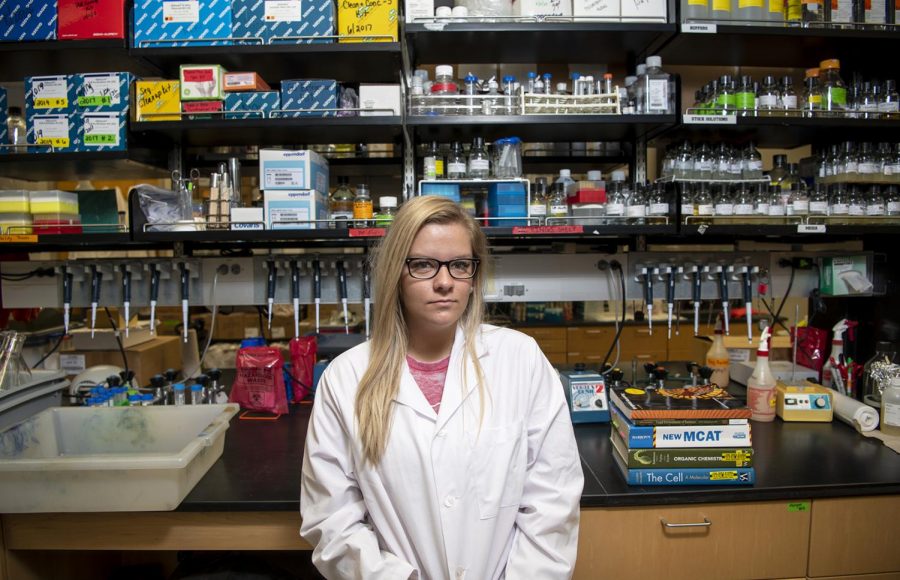 Pre-med student Amanda Harder always carries her textbooks with her. Harder cut her course load from 21 credits in the fall of 2018 to 15 credits spring 2019 by dropping business, her second major, to a minor. Photo by Ivy Ceballo

For some students, mental health can be a growing problem, which can eventually lead to them taking time away from WKU or changing their major.

Amelia Hicks, a former sophomore journalism major from Florence, said mental health was a big reason among a combination of things that caused her to leave WKU. She said she had a history of anxiety and depressive episodes, and while freshman year went fine, she hit a wall her sophomore year.

Hicks said she noticed a change when she did not want to go out to parties anymore and said some days she was too afraid to leave her dorm room. She said she was three hours away from her support system at home and felt isolated. She also said she was working “weird” hours as a desk assistant, so her sleep schedule was off.

Hicks said she decided to leave after realizing she was struggling with her mental health and because of stress from paying for college by herself.

“I just felt like I was losing control,” Hicks said.

Hicks said while she does not regret her time at WKU, she regrets the way she left. But Hicks said it was for the best because it was not working out for her.

“School is not more important than your mental health,” Hicks said. “You have to take care of yourself first.”

Karl Laves, associate director of the Counseling and Testing Center, said students leave WKU every semester for mental health reasons. He said by leaving under medical reasons, their transcripts are “protected” until they decide to either return to WKU, transfer elsewhere close to their support network or start working and then eventually decide to return to WKU.

“While we encourage students to stay enrolled — and we may recommend reduced hours — there are times when the best option is to take a medical withdrawal and focus on healing and recovery,” Laves said.

Laves also said retention is not necessarily keeping students in school, but sometimes by helping students “take a break,” they can come back to school later and be successful.

He said it is harder to measure students who change majors due to mental health reasons, but students are encouraged to use career services to find the right major for them.

Amanda Harder, a former business major on a pre-med track, said she switched majors to biochemistry because of stress from her classes not overlapping.

She said at first one of her advisers asked her if she was sure business and pre-med was what she wanted to do, but eventually all of her advisers and friends encouraged her to keep going. She said she was taking 18 hours each semester along with having to do summer and winter classes online.

“It was the worst thing imaginable,” Harder said.

Harder said at one point, though she had support, she was accidentally sleeping through alarms from exhaustion and making herself physically sick because she was not doing well enough mentally and had a high anxiety level.

Harder said now that she has decided to switch majors, her mental health has improved along with her school work. Now that she is taking only 12 hours, she said she feels like she has time to breathe and is able to work out and study more.