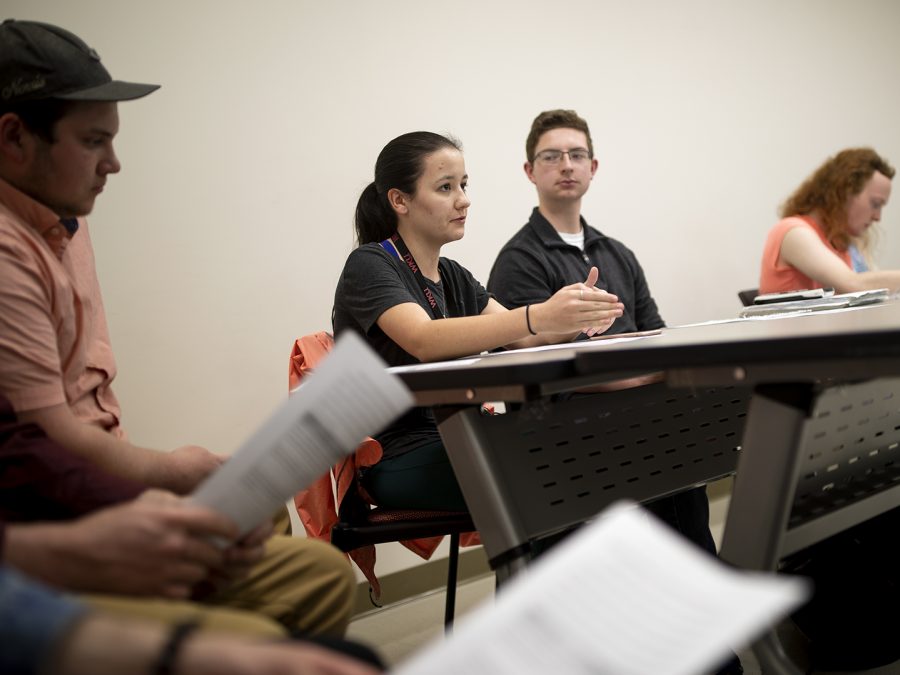 Tori Hampton, freshman exploratory major, talks about her mother's experience with children's mental health as a school teacher during a discussion about adolescent mental health on April 8, 2019. "The resources for handling this in public schools is very limited," Hampton said. "I think mental health is a very serious Issue for many people today, but it often goes undiagnosed and untreated due to the stigma around mental illness."

An honors college class deliberated on different approaches to improving mental illness in adolescents at the Mahurin Honors College Monday.

Students in the class, titled Citizen and Self, researched a topic throughout the semester and held deliberations to discern possible solutions to their respective issues.

Hayden Larkin, a psychological science major and a leader of the deliberation said that no solution is perfect, just as science still does not have solutions for a lot of physical illnesses.

“There is a biopsychosocial reason for why someone is going through a mental illness,” Larkin said. “If it’s in adolescents, biologically, a lot of it is hormonal. It usually starts around puberty, and you are just predisposed to have illnesses like that.”

He said adolescence is a pivotal moment in a person’s life psychologically, as the body is going through a lot of changes.

“Socially, that’s where those views come to play,” he said.

Option one was to reach adolescents in the community through high schools, such as through mental health screenings provided by clinical psychology graduate students at local universities.

Larkin said the idea behind this would be similar to how students get seasonal physicals for playing sports at their high school.

However, some students were concerned that these screenings might create hyper-vigilance and cause adolescents to look for problems that may not be there.

The second option proposed increasing overall access to and knowledge of treatments to decrease the stigma towards mental illness, such as advertising available resources with fliers and signs.

Freshman psychological science and sociology double major Elizabeth Hill said that adolescents should be certain they have an issue before trying to solve it by themselves.

“You shouldn’t even be focusing on how to help yourself until you know that there’s a problem,” Hill said. “So I feel like the first step is learning how to ask for help in a society where that’s so frowned upon.”

Tess Welch, a freshman special education major, talked about a media campaign she tried to run during high school to raise awareness during suicide prevention week was largely ineffective.

“It was like a dress up day, kind of just like say no to drugs, like don’t kill yourself,” Welch said. “I think these options would be good in hypothetical worlds in which more resources are available.”

A counter to this was that instruction training can cost up to $2000, and there is no guarantee the first aid teacher’s skills would be used regularly in the school system.