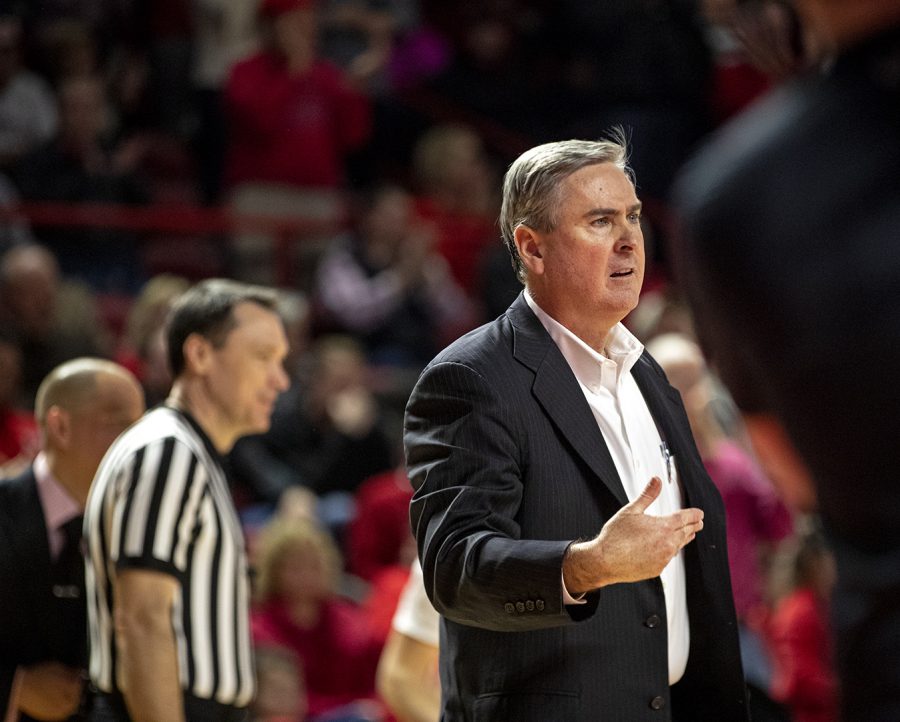 WKU basketball coach Rick Stansbury leads the team to victory during the game against UTSA. WKU men’s basketball defeats UTSA with a score of 96-88.

With the college basketball season wrapped up, it is time to look forward to the 2019-20 season.

April 17 marked the beginning of the spring signing period in which all unsigned high school basketball players will put pen to paper and make official their commitments to play for their respective schools.

The WKU men’s basketball team entered the spring signing period with roster gaps to fill, but head coach Rick Stansbury addressed some of those needs during the fall.

The first of the fall signees was forward Isaiah Cozart, who committed back in October and signed on Nov. 14. Cozart played his high school ball at Madison Central High School in Richmond.

The 180-pound forward has a knack for shot blocking thanks to his 6-foot-7-inch frame.

Just two games into his senior year, Cozart became Kentucky’s all-time leading shot blocker, recording his 542nd block. He finished his career with 716 blocks. Cozart averaged 20 points, 12.2 rebounds, 5.8 blocks and one assist per game as a senior this season.

On March 18, Cozart was named the Gatorade Kentucky Boys Basketball Player of the Year. 247Sports ranked Cozart as the 359th player in the 2019 class and the seventh-best player in Kentucky.

Stansbury said he looks forward to coaching the Kentucky native.

“We’re excited to have Isaiah join our family,” Stansbury said in a press release in November. “It’s very obvious he comes from a really good high school program where he’s been coached by coach [Allen} Feldhaus, and he played for the same AAU program, M.A.T.T.S. Mustangs, as Taveion Hollingsworth. He’s a terrific student and comes from a great family…and anytime you have the chance to do something that no other player has done in the history of high school basketball in the state of Kentucky, there’s something special about that. He’s a young player, and no question his best days lie ahead of him.”

Stansbury continued to recruit Kentucky hard, adding another signature from the Commonwealth after guard Jackson Harlan inked his commitment on Nov. 15.

The 6-foot-5 inch guard attended Clinton County High School in Albany, Kentucky. Harlan is a high-scoring player and averaged 26.4 points per game on 47% shooting as a junior. 247Sports did not include Harlan in its rankings.

“We’re excited to have Jackson become a part of our program,” Stansbury said in a press release in November. “He’s a Governor’s Scholar in the state of Kentucky, and he comes from a really good high school program with coach [Todd] Messer. He has a terrific family. His father played college basketball at Transylvania, and his mother is a Western Kentucky graduate. He brings a lot of different abilities, most of all the ability to shoot that basketball. At the same time, he can put it down and go score it.”

The final signee from the fall is the current headliner of the Hilltoppers.

“Nick brings great potential with his ability to run and block shots,” Stansbury said in a press release in November. “His defense is ahead of his offense, but no question he has a tremendous upside as he continues to get stronger. He’s one of those players that it’s not what he is now, but what he can become that excites you. We’re happy to have him as part of our program.”

Stansbury seemingly added another piece to the 2019-20 roster puzzle on the first weekend of the spring signing period, as four-star point guard Jordan Rawls committed and announced his intention to join the Hilltoppers next year on Saturday.

Rawls, a member of the 2020 class, originally tweeted he would reclassify and become a part of the 2019 class. But Rawls soon backtracked, clarifying in a tweet posted Sunday he was a WKU “commit for the class of 2020” and would “revisit” his options “later in the summer.”

If the Tennessee prospect ultimately elects to join the Hilltoppers’ 2019 class, he will be eligible immediately. With Dalano Banton transferring and Lamonte Bearden graduating, Rawls will likely compete for point guard minutes very soon after his arrival on the Hill.

247Sports Composite has Rawls ranked 70th overall and as the sixth-best point guard.

Not to be forgotten, redshirt junior forward Carson Williams and redshirt freshman guard Jeremiah Gambrell will get their chance to crack the rotation after redshirting in 2018-19.

Only one more scholarship offer remains before Stansbury reaches the maximum roster limit of 13, but WKU is likely still not done making moves this spring in preparation for next season.