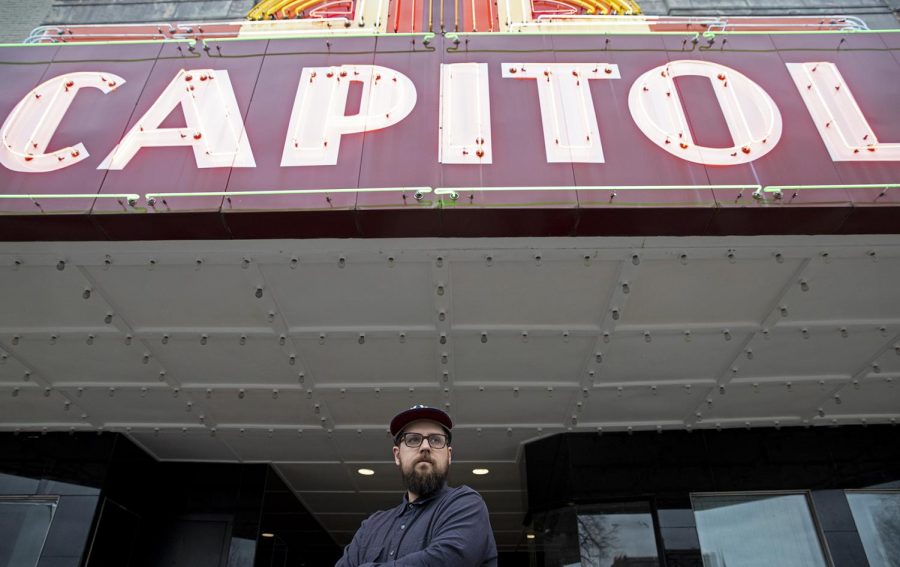 Adam Moore is a WKU alumnus and graphic designer based in Bowling Green. "I actually graduated from WKU years ago and got to intern at the Capitol Theatre back in the day. It was my first ever internship, and it was a really cool experience," Moore said.

In a society that puts so much pressure on doing things at a recommended time and pace, WKU alumnus Adam Moore is a revolutionary.

Moore said he’s been in the arts since he was a child and was in arts magnet programs throughout his education prior to attending WKU. He said he got into graphic design by designing for friends’ bands.

“Doing stuff on your own is a good way to get into anything,” Moore said. “I know people who went into design programs and didn’t really find their own place and didn’t know what to do when they were out.”

At the end of his sophomore year, Moore left school to pursue his dream of working with both graphic design and music by accepting a job in Nashville.

“I got a job working as a freelance designer for a record label,” Moore said. “And at the same time, my band was doing a lot and playing a lot.”

Moore said even though the money wasn’t great, the work was.

“It’s cool work that really isn’t around anymore,” Moore said. “And it got me into working into a design environment pretty early.”

Moore said he began doing more freelance work soon after in order to gain more experience and tune his skills. Moore graduated from WKU in 2007 after going back and forth between working and school.

“If I had to do it over again, I wouldn’t change it,” Moore said. “I don’t know what I would think about school if I was doing it right now. I loved my college experience, but I think the most valuable part of it is being around like-minded people as well as being immersed in situations with other people.”

Though this unorthodox path presented some challenges for Moore, he said it ultimately enabled him to make the most of his time.

“Right out of college, your twenties are when you have the most energy,” Moore said. “If you’re not putting that to some good purpose, it’s to your own detriment.”

To Moore, this time in an individual’s life can prove to be the most impactful, as it was for him. Moore said he hopes students will take advantage of this time and do the most with it even if it means trying some things that don’t work.

“I definitely think pushing hard in your twenties is super valuable,” Moore said. “You have to figure out as quickly as you can what directions you want to push in. But during that time, almost anything doesn’t hurt. You can push and see where it goes.”

Greg Leppert, a close friend of Moore’s from college, said he believes Moore sets an example for other artists, particularly those who stray from the path of what one’s “supposed” to do.

“Adam is a prime example that, as far as the professional journeys of artists are concerned, orthodoxy is a myth,” Leppert said.

Moore moved around and also found work in other aspects of graphic design such as marketing. Moore said he finds each job he had taught him something unique about his craft, whether it was about directing photography or how to design for a specific campaign.

Throughout his career, Moore continued to work on freelance pieces, which he said is easier than ever in this digital age.

“I have an Instagram account that I kind of funnel all of my personal, creative work into,” Moore said. “It is so much easier to be an entrepreneur now than it has ever been, and a lot of kids don’t get that — they think things are harder than they are. But you can draw a picture of a duck and build a Shopify store, send it out on Instagram and sell a T-shirt in an hour and a half.”

Because of this, Moore said he sees unlimited opportunities for artists if they’re willing to work hard and try new things.

“At this point in my life, I’m really excited about having a stable life,” Moore said. “I have a family, and most of my life has been working crazy hours to get these big projects done and to make a career for myself, but now I’m excited about a regular nine-to-five job.”

Moore said this is a new experience and has allowed him to slow down.

Despite this, Moore said he is still pushing himself to learn new things.

“I’m trying out my entrepreneurial bone right now with my side business where I sell stuff that I design,” Moore said. “I’m enjoying the low pressure, fun stuff that exercises all the parts of my brain.”

Moore uses his Instagram, @haroldapples, and his website, natdrygoods.com, to promote his side business and gain more exposure.

“The Spencer’s ‘badge,’ as I call it, was sort of a one-off idea,” Shepherd said. “It’s not a long-term logo, but it had so much going for it that we decided to print it on just about everything. It’s clever, it’s eye-catching, it’s just super cool.”

Moore and Shepherd also have new projects for Spencer’s in the works.

“Some of the elements of that badge are making their way into a refreshed brand identity for Spencer’s, which will feature a few different icons and type treatments,” Shepherd said. “Adam’s hard at work on that right now in between his hundred other projects.”

Leppert said Moore’s dedication, openness to change and creativity are what set him apart from other artists.

“Being friends with Adam is a masterclass in understanding that creativity doesn’t need a moment, it doesn’t need an ill temperament or a tortured backstory,” Leppert said. “Creativity can come just as well from patience and kindness and a desire to pass through time leaving joyful artifacts in your wake.”