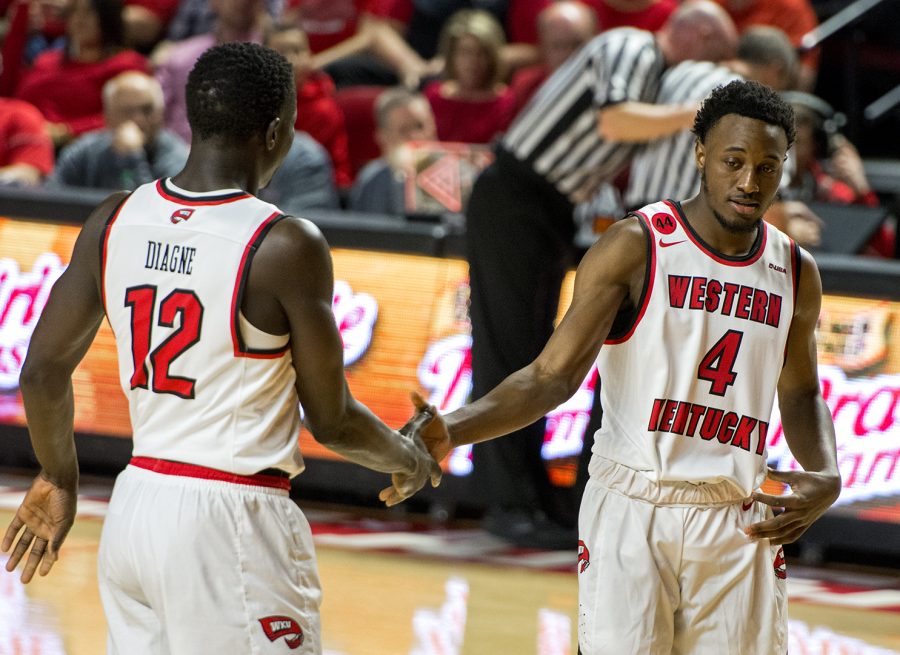 WKU forward Moustapha Diagne (12) gives good luck to WKU guard Josh Anderson (4) at the free throw line during the game against Marshall on Saturday, Jan. 27 in E.A. Diddle Arena. In Anderson's 10 minutes of playing time, he totaled four points including a dunk in the first half. The Hilltoppers won the game 85-74.

Redshirt junior forward Moustapha Diagne received recognition on Wednesday due to his work off of the court.

Conference USA announced Wednesday that Diagne is one of 14 recipients of the Air Force C-USA Winter Spirit of Service Award.

This award recognizes the community service efforts of athletes in C-USA. It is based on significant public service, good academic standing, and participation in their respective sport. The award is presented three times a year and Wednesday’s presentation corresponded to the winter sports.

The Senegal native has been a leader for the Hilltoppers off of the court in community service, which included a cultural-exchange trip to Belize last summer. Diagne played basketball games on the trip and also helped out with basketball clinics and visited homes and churches.

According to a press release, Diagne played with campers with developmental disabilities, donated school supplies to the local Stuff the Bus supply drive, volunteered with area children at the United Way Day of Caring, and ran basketball stations with children at the Center for Courageous Kids’ weekend retreat for those with asthma this school year.

This is the third year in a row in which the recipient of Winter Spirit of Service Award is a member of the men’s basketball team.