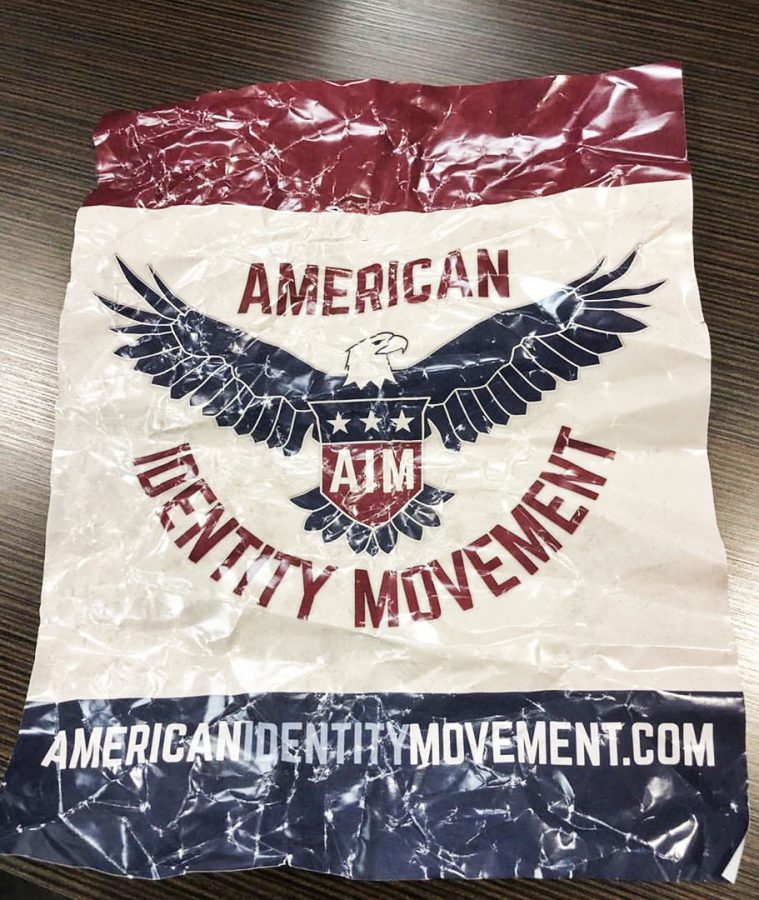 Members of the YDSA have been taking down AIM fliers around campus. The flier above was found in FAC.

A white nationalist organization, the American Identity Movement, has been actively recruiting and posting flyers on college campuses across the nation, including WKU, which has sparked a negative response among students.

AIM was founded by Patrick Casey, the former leader of Identity Evropa, a white nationalist organization that was dissolved following a leak of its internal discord communications by the nonprofit media organization Unicorn Riot.

Identity Evropa was officially condemned by the WKU Student Government Association in December 2018 after the organization began posting flyers across campus. Many, including the Southern Poverty Law Center, see AIM as merely a rebranding of Identity Evropa, given it is under much of the same leadership and has similar goals. However, Michael Atwood, a spokesman for AIM, claims AIM is an entirely separate organization.

“Identity Evropa is legally and purposefully a separate organization which is no longer operational,” Atwood said.

Atwood and AIM as a whole see immigration and America’s changing demographics as the greatest threat to American interests, a position also taken by Identity Evropa prior to its dissolution.

“Today, Americans of European heritage are being demographically replaced as a result of factors such as mass immigration, globalization and misaligned economic incentives,” Atwood said. “Likewise, the notion that this process isn’t occurring is unacceptable because the demographic replacement we face is openly celebrated by the current establishment and far left.”

AIM is a fairly new organization, having been formed in March 2019, and according to Atwood, claims under 1,000 members nationwide, far fewer than Identity Evropa had at its height. Identity Evropa lost a significant share of its members following the Unite the Right rally that took place in Charlottesville and eventually claimed the life of Heather Heyer.

Daniel Candee, the YDSA president, said he first heard about AIM after it began spreading posters on the University of Louisville’s campus.

Candee said the American Identity Movement, similar to Identity Evropa, subscribes to the idea of ‘peaceful ethnic cleansing,’ an idea pushed by Richard Spencer, a prominent white nationalist and organizer of the Unite the Right rally in Charlottesville. This alongside AIM’s anti-immigrant and anti-semitic rhetoric have Candee and many others on campus concerned.

“We can’t allow any organization that dehumanizes, denigrates and despises their fellow men and women to operate without resistance on campus,” Candee said. “They can’t operate without a coherent and vocal opposition on campus.”