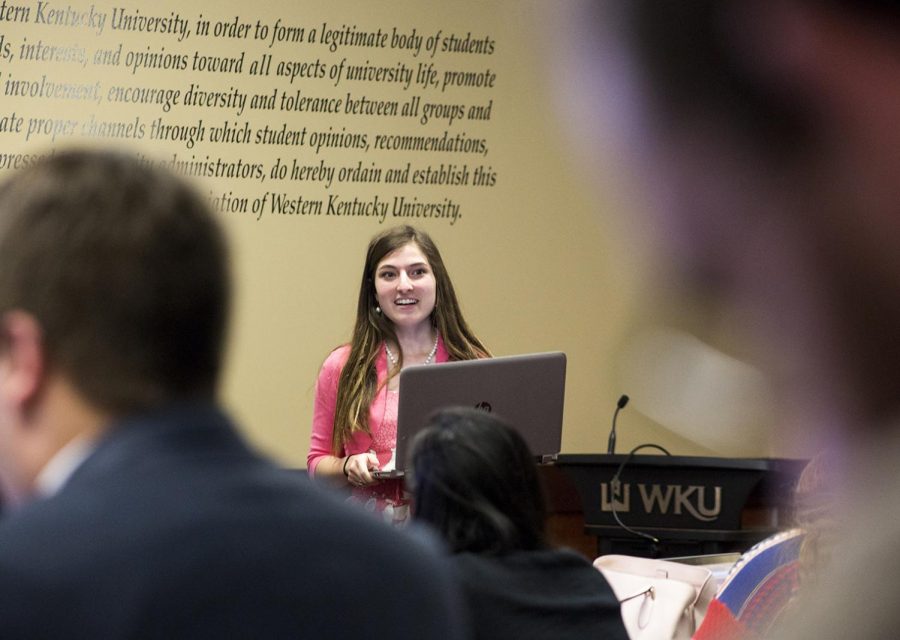 A judge has ruled in favor of releasing records to former Student Government Association President Andi Dahmer as she proceeds with her lawsuit against WKU.

In the lawsuit, Dahmer cited verbal, mental and emotional abuse she claims she suffered from the “tortious conduct” of WKU, Caboni, Anderson and Pride. She also accused the defendants of discriminating against her based on sex and not following university procedures such as the “Discrimination and Harassment Policy.”

The Herald previously reported Dahmer’s harassment allegations, which she came forward with on April 24, 2018. She said she experienced some of the harassment from eight SGA senators, including instances of the senators cursing at her in her office, calling her derogatory names and anonymously exchanging group messages with each other wishing her physical harm.

WKU denied Dahmer’s lawsuit allegations of sex discrimination and denied Dahmer “suffered from a hostile educational environment” and “suffered sexual harassment and threats at the hands of WKU students in her tenure as SGA president,” according to court documents.

To help in discovery for her lawsuit, Dahmer requested various documents and recordings from WKU, including records of complaints made relating to Pride, OCR (the “Responsible Employee” university policy) and Title IX. Title IX is a federal civil rights law part of the Education Amendments of 1972. Title IX prohibits sex discrimination in universities that receive federal funding.

The scope of Title IX was expanded by former President Barack Obama to mandate universities combat sexual harassment, including sexual violence, as previously reported. In her request, Dahmer asked for WKU to turn over all other student complaints of sexual or gender-based discrimination in SGA and any other documentation related to the complaints as well as statements obtained by WKU during its Title IX investigations.

According to court documents, Dahmer also requested records of any complaints or other communications, such as emails, from other SGA members to the Title IX office, Equal Employment Opportunity and the Office of Student Conduct. These records would be regarding issues with other SGA members being discriminatory, violent or exhibiting gender-based sexual harassment since August 2017.

Dahmer also requested all records of Title IX/sex-discrimination complaints and copies of any settlement agreements from the last 10 years relating to WKU.

WKU objected to these requests, asserting broadly the Family Education Rights and Privacy Act excluded many items classified as “educational records” from being disclosed. Dahmer and her attorney, Lindsay Cordes, argued the records were not protected by FERPA and were “relevant to prove an atmosphere of discrimination,” which they said was necessary for her Title IX claim, according to court documents.

In an opinion from Magistrate Judge Lanny King, the records of other complaints of sex-based or gender-based discrimination in the WKU SGA were ruled as “relevant to [Dahmer’s] Title IX claim” and approved.

“To prove her case, Plaintiff [Dahmer] must prove that a pervasive environment of sex-based discrimination existed in the WKU SGA that altered the conditions of her educational environment,” King wrote in his opinion. “These records are relevant to her claims.”

In his opinion, King defined “educational records” under FERPA and said classification should be used for records relating to individual student academic performance, financial aid or scholastic probation.

“Incident reports relating to non-educational matters ‘are not educational records because although they may contain names and other personally identifiable information, such records relate in no way whatsoever to the type of records which FERPA expressly protects,’” King wrote.

King said in his opinion Dahmer’s particular record requests do not fall under “educational records” protected by FERPA.

“It is difficult to believe that the lawmakers who passed FERPA into law sought to prevent disclosure information that could be used to prove claims of gender-based discrimination, nor did they likely believe that their votes would lump these sorts of disciplinary records in the same protective scheme with academic records,” King wrote.

Dahmer requested records of any complaints made relating to Pride, the former SGA faculty adviser, and any allegations of sexual harassment, sexually inappropriate comments or inappropriate behavior on behalf of Pride within the last five years.

WKU objected to this request, saying the records Dahmer requested were protected by FERPA and were irrelevant to Dahmer’s complaint.

In his ruling, King said the records of individual employees of educational institutions were not protected from disclosure by FERPA, and he said statements by student witnesses about misconduct by teachers were only “tangentially related” to students and were not protected by FERPA, according to court documents.

“This evidence is also relevant to the claims made by Plaintiff [Dahmer],” King wrote. “Plaintiff has brought claims of negligent hiring, teaching, retention and supervision in her amended complaint against WKU. […] If prior complaints were brought to the attention of Defendants WKU and Caboni, yet they failed to act in any way or acted inappropriately, this information would be directly relevant to Plaintiff’s claims.”

In Dahmer’s amended complaint, filed on Jan. 29, she included accusations of Pride failing to intervene in a “hostile environment” in SGA while she served as president, saying he also made “sexist and derogatory comments” to Dahmer and “referenced sexual acts” to Dahmer and other female SGA students during the 2018-19 year, according to court documents.

In her amended complaint, Dahmer also accused Caboni of violating Title IX by allegedly retaliating against her for filing her lawsuit against him and the university by rescinding his scholarship recommendation without explanation.

Lastly, Dahmer said in the amended complaint WKU and Anderson failed to complete a follow-up investigation after being made aware of the hostile environment she was experiencing while serving in SGA.

“WKU appropriately responded to all of Ms. Dahmer’s complaints and we are confident that the District Court will ultimately find in WKU’s favor and rule that WKU complied with Title IX when it promptly and thoroughly investigated Ms. Dahmer’s Title IX claims and that Ms. Dahmer was never denied any educational opportunities and benefits at WKU,” according to the statement.

Dahmer also requested from WKU “any audio or video recordings of any student disciplinary or University Disciplinary Committee meetings relating to any students who were disciplined as a result of any complaints made by her,” according to court documents. WKU had objected to this request, stating these records contained student information and were protected from being disclosed.

King ruled FERPA allowed these records to be disclosed as long as they were the “final results of any disciplinary proceeding conducted by such institution against the alleged perpetrator of the crimes of violence against the victim,” according to court documents.

King also said Dahmer was “entitled to the production of this information” and that the records were subject to redaction of personal identifying information of those involved.

“FERPA does not create an absolute privilege that prevents the disclosure of the records Plaintiff [Dahmer] seeks,” King wrote. “This information is relevant to Plaintiff’s claims under Title IX, as she will need to prove deliberate indifference by WKU that deprived her of educational opportunities provided by the school.”

Deadlines in the lawsuit for both parties were extended by three months, including the deadlines to disclose the identities of those testifying at trial and to complete all discovery for the case. All discovery in the lawsuit now needs to be completed by Oct. 30.

Demir did not respond to the Herald’s request for comment on the judge’s ruling.

Cordes, Dahmer’s attorney, released a statement regarding the judge’s ruling.

“We are pleased with the Judge’s rulings and look forward to WKU producing this information. We will continue to move forward with discovery and proving our case, despite WKU’s assertions that Andi’s lawsuit is frivolous and maliciously untrue,” the statement said.

Bob Skipper, director of media relations, said the university did not have a statement at the time of publication.