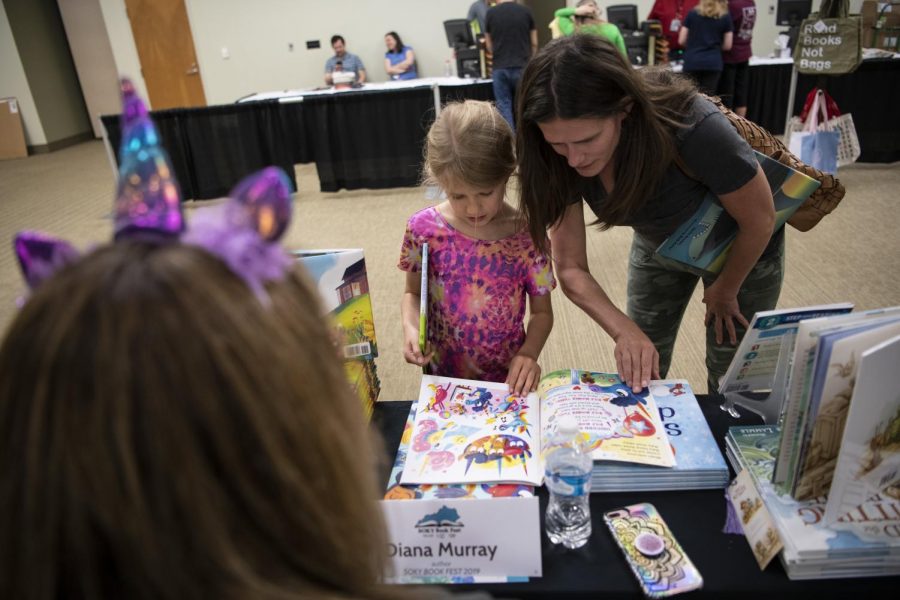 Isadora Treangen, 8, and her mom Victoria look at a book by Diana Murray during the SOKY Book Fest at the Knicely Conference Center on April 27, 2019. "Stomp into reading," Murray wrote when she signed Treangen's new book.

Thousands of readers and authors gathered Saturday at the WKU Knicely Conference Center in Bowling Green for the annual Southern Kentucky Book Fest.

Approximately 3,000 readers of all ages flocked the halls during the 21st annual book fest, meeting their favorite authors and attending interactive panels throughout the day.

Positioned behind a table stacked with copies of her novels that towered over her head when she sat, Redwine shared the story that sparked the beginning of her latest endeavor: the Ravenspire series.

Redwine published the first book in the series, “The Shadow Queen,” in 2016 through Scholastic Inc. after being disappointed in the portrayal of the iconic Snow White in the 2012 movie “Snow White and the Huntsman.”

“I was so disappointed with it,” Redwine said. “It was just another faceless Snow who wandered through the plot instead of her happening to the plot.”

She recalled ranting throughout the 45-minute-drive home to her husband, who promptly looked to her and said: “If you want it done differently then you should do it yourself.”

“The Shadow Queen”replaced the cheery seven dwarves with seven fire-breathing dragons, the meek and kind Snow White of the classic Disney imagination with Lorelai Diederich: a crown princess on a quest to kill the wicked queen who murdered her father.

The evil queen that haunted the nightmares of so many children evolved into Irina, a magic wielder who needs no poison apple to kill her prey and the huntsman and prince charming become one in Prince Kol, the second-born son of Eldr tasked with saving his kingdom.

While Redwine’s table was piled high with her seven fantasy novels, Elizabeth Weitzman’s table was filled with film’s most iconic women.

Weitzman’s novel“Renegade Women in Film and TV” is a history of women in film and television.

“I wanted to share the work of these amazing women because we don’t see their work anymore,” Weitzman said.

Weitzman said that the history known by the masses is really only the history that someone chose to write, and what many historians did was omit characters and people who didn’t resemble them.

“You hear a lot that women are underrepresented in Hollywood,” Weitzman said. “And that’s true and it’s great that we’re talking about that, but that’s only half the story.”

Women have pioneered Hollywood since the beginning, she said, and women had always been placed on a parallel track.

As she worked on the book, Weitzman interviewed iconic names in film and television such as Amy Poehler, Jessica Williams and Barbra Streisand.

She said that interviewing these women was something that she still couldn’t believe happened even as she talked about her experience speaking to Barbara Streisand.

“She is thoughtful and kind and meticulous and the stories up she tells in our interview are just mind blowing,” Weitzman said.

Streisand told Weitzman of her experience while directing and starring in the 1983 drama Yentl and of the struggles that she faced.

“It took her 16 years to make Yentl,” Weitzman said. “16 years and she was the top artist in America at the time.”