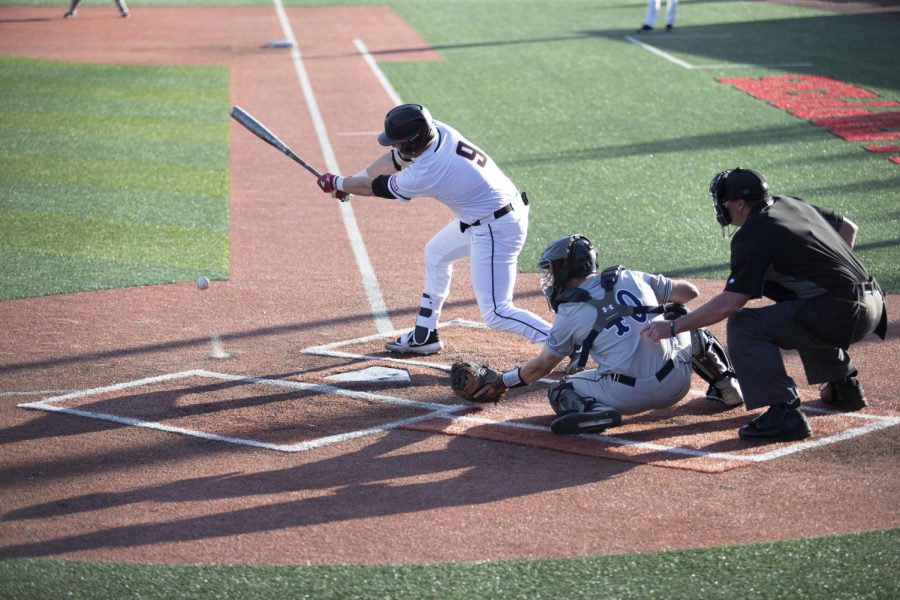 Junior infielder Jack Wilson takes a swing during the Hilltoppers' 8-7 win over Belmont on Tuesday in Nick Denes Field.

After giving up a three-run lead in the ninth, WKU defeated the Belmont Bruins on a walk-off fielder’s choice single from Sam McElreath.

“We just needed to find a way to win today and the Tops did and I’m really proud of what they did,” head coach John Pawlowski said. “Anytime we play Belmont it is always a challenge and midweek games are always a challenge.”

Jack Lambert made his first start this season for the Hilltoppers instead of coming off of the bench as a relief pitcher. He started off strong in the first inning, but it quickly went downhill after that.

A solo home run from Belmont center fielder Hagan Severance started a run for the Bruins over the next two innings. Lambert walked three straight batters in the third before being replaced by junior relief pitcher Jeff Ciocco.

Caught in the middle of a bases loaded situation with no outs, Ciocco gave up a 2-RBI double that extended the bruins lead by three. But third baseman Nick Brunson had a hand in all three outs to get the Hilltoppers out of the jam.

As they have several times this season, WKU turned the momentum around in their favor. The Hilltoppers scored four runs in the bottom of the third to gain the lead for the first time.

Richard Constantine, who has replaced injured graduate transfer Davis Sims who is out for the rest of the season, hit a two run-home run that highlighted the inning followed by two RBI groundouts from junior second baseman Jack Wilson and freshman center fielder Jackson Swiney.

“To be a successful baseball player you have to be confident in your abilities,” Constantine said. “Our coaches always tell us to stay ready and wait and get your chance to make the most of it, so that’s what I have been doing.”

From there, Ciocco took control of the game, not allowing a run for the rest of his time on the mound. He gave up no runs on three hits and one walk against the 18 batters that he faced in 4.1 innings.

Jacob Green replaced Ciocco after two Bruins runners got in scoring position. After escaping the inning with no runs allowed, Green was replaced by freshman Hunter Crosby after pitching less than an inning.

In the ninth inning, Belmont took advantage of the pitching changes as their freshman right fielder John Behrends hit a two-run home run to bring the lead down to three, which caused another pitching change. A series of singles and walks allowed the Bruins to make the comeback and take the lead.

In the bottom of the ninth, an error by the Bruins, with two runs on base, allowed Jake Sanford to score and tie the game with the bases loaded. Sam McElreath came in to pinch hit for Brunson, hit the ball the second baseman giving him the chance to turn the double play, but failed to do so, allowing Nelson to score to end the game.

Constantine went 2 for 5 at the plate with two RBIs and a home run. Redshirt junior Dillon Nelson went 2 for 4, scoring two runs, and one RBI. Junior shortstop Kevin Lambert went 2 for 5 with one run scored and one RBI.

The Hilltoppers will head back out on the road to face the Marshall Thundering Herd who currently sit at 18-14 overall after losing to Virginia Tech tonight, and 6-6 in the conference. WKU has lost four of their last six, including a sweep in 2017, against the Herd.

“Marshall is a very good team and it will be another challenge for us,” Pawlowski said. “We just gotta continue to play better and find a way to continue to have some momentum and play with confidence like I know we can play.”

The first game will be on Friday at 2 p.m. followed by a 1 p.m. start on Saturday, and a noon start in Sunday.