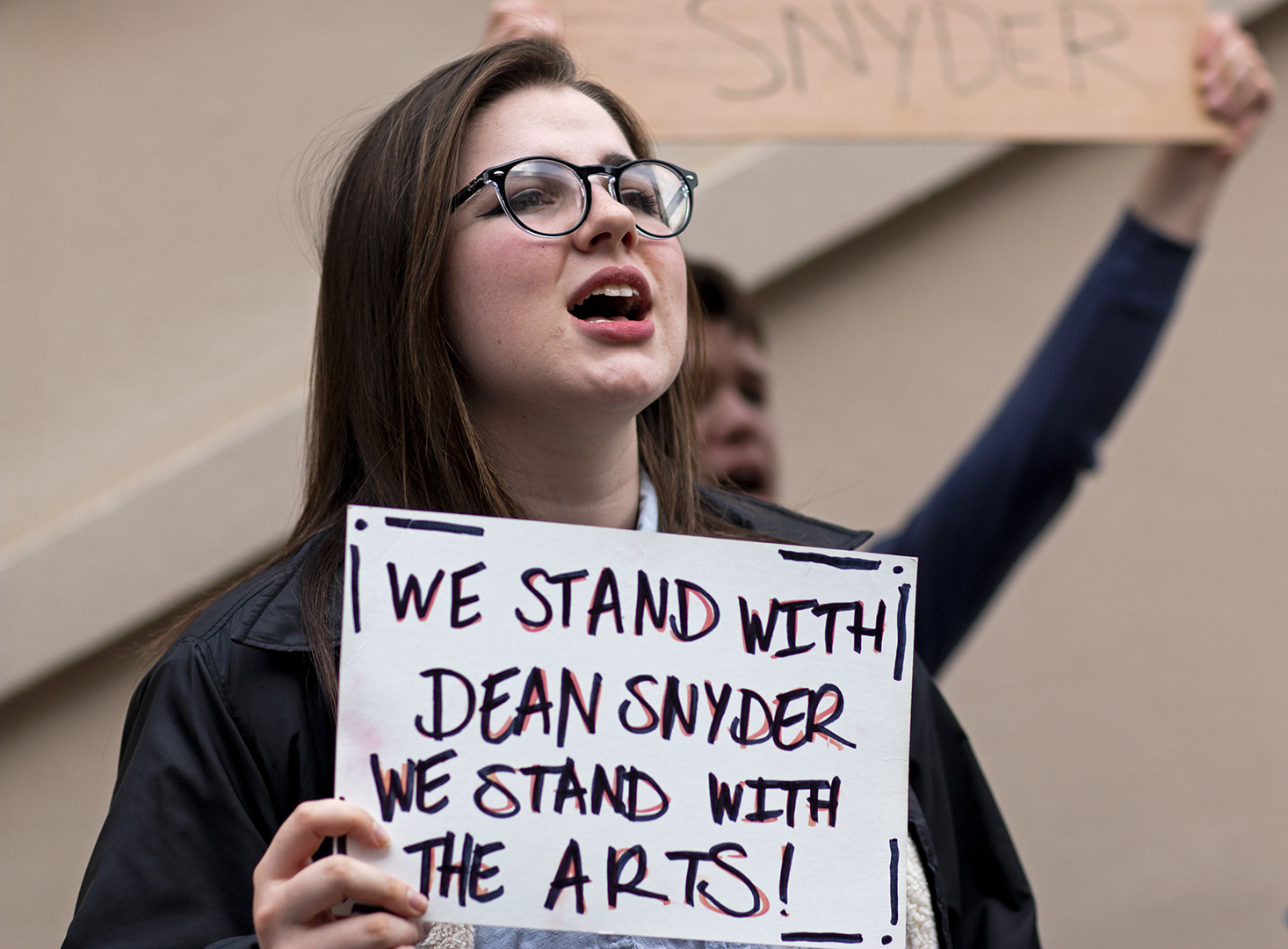 WKU musical theatre student Hailey Armstrong chant "Tell us why. We want to know," with other protesters outside of Potter Hall and in front of the Wetherby Administration Building on Friday, March 29 following the sudden resignation of former Potter College Dean Larry Snyder. "Dean Snyder was one that often fought for us PCAL students because he realized the importance of Arts and Humanities," Armstrong said. "It's been a great experience to feel supported by my fellow protestors and students that aren't even in Potter College. Even a passing car honking and waving as they go by shows me that even though the attitude of this university's administration is one of disregard for the arts, people still understand what we do and why it's important."

Less than 24 hours after Larry Snyder announced his resignation as dean of Potter College of Arts and Letters, a small group of students gathered outside Wetherby Administration Building. They held signs, chanted and sang a “freedom song.”

During the rest of the week, the protests grew in size and spilled over to social media, chalk and flyers.

The Student Government Association Executive Council released a statement Monday, April 1 asking for the student body to be informed on the circumstances surrounding Snyder’s resignation “immediately.”

“With students missing class to protest and many concerned about the future of their respective majors, it is of the utmost importance that the student body be informed about the situation,” the statement said.

Ballman said during the dialogue Snyder was “absolutely not” asked to resign for any reason related to misconduct.

Ballman was formerly the dean of the College of Arts and Letters at California State University, San Bernardino.

When asked by SGA President Stephen Mayer if Potter College and Ogden College of Science and Engineering would merge, Ballman was adamant in expressing that the colleges would remain separate.

“That is not the way this university will be organized, that is not part of the thinking at all,” she said. “I think that does not make sense to me.”

One point brought up during the dialogue was the apparent washing away of chalk art left by the students. Some chalk art read “justice for Dean Snyder,” and “tell us why.”

In a statement provided to the Herald, student protestors Arielle Conrad, Cavan Hendron, Matthew Kerman, Morgan Stevens and Tommy Sullivan said they were not aligned with any campus organizations or members of SGA.

“The only messages we’ve written are “Tell Us Why” and “No Comment,” the statement read. “Other chalking has come from other students who are not associated with us.”

There were several reports from protestors of the chalk messages being erased by Facilities Management on Monday, with several students claiming that the drawings that said “tell us why,” were singled out and washed away with pressure washers.

Bryan Russell, chief facilities officer, confirmed that one message was erased Monday morning containing “inappropriate language.” Russell said Facilities Management does not typically remove any messages from campus unless they are deemed inappropriate or threatening.

President Timothy Caboni tweeted Monday evening that he was aware of reports of chalking being washed away on campus.

“I have communicated to WKU facilities that our university supports this type of expression and that it should not be erased,” he wrote in the tweet.

On Monday, students said they decided to move from outside Wetherby to Downing Student Union to reach more students. Many of the students initially present at the protests were from departments within Potter College, but they notified classmates and friends from other colleges, encouraging them to join.

Flyers were passed around DSU by students asking for “transparency and honesty from our administrators, especially Provost Ballman and President Caboni.”

Melissa Rush is a current non-traditional student and has been a part of WKU as a student, parent, spouse and donor.

In an email to the Herald, Rush said she was highly concerned “with the firing of Dean Snyder as well as the multiple other decisions that seem to have been made behind closed doors.”

“My late husband’s grandmother was a graduate in the 1920s, his parents in the 1960s, my husband graduated in 1986, and my daughter in 2014,” she wrote. “I am disheartened to see the decline of what was once a stellar university. I am an English major in my final year and have had the most incredible professors. I’m afraid with continued decisions made such as the one with Dean Snyder, WKU will no longer attract stellar students or professors.”

Kevin Mays is an alumni of WKU and a Bowling Green resident. His daughter, Remington Mays, is a current student at WKU. He was initially excited when she chose to attend WKU, but now feels that the culture has changed significantly since his time as a student.

“Times change, and I might have a more romanticized view, but this doesn’t seem to be the same Western I knew,” he said. “Had I known what it was like now, I might have encouraged [my daughter] to go somewhere else.”

Mays said he has known Snyder personally, serving on several leadership roles with him at their church. He said he saw how passionate Snyder was about his position as dean.

“He was serving in a role that meant everything to him,” Mays said. “He was deeply devoted to what he did.”

He said it was “quite a shock” when he learned of Snyder’s resignation, and that he has been disappointed in the manner with which the administration has handled the situation.

“They’re lacking transparency,” he said. “Regardless that my child goes to WKU and I’m paying tuition, I think there’s more to the story than what they’re saying.”