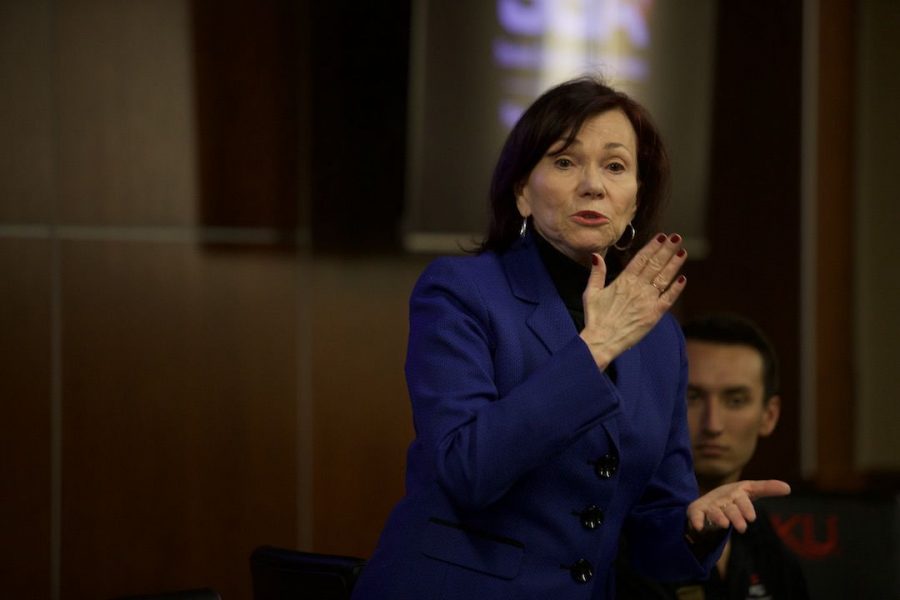 WKU Provost Terry Ballman speaks to students about their concerns over Larry Snyder's resignation. Snyder was the dean of Potter College of Arts and Letters.

Informal survey results from faculty determining whether or not they had confidence in the leadership of Provost Terry Ballman and President Timothy Caboni were emailed to faculty on Thursday afternoon.

The survey followed the wake of confusion left after the resignation of Larry Snyder as the dean of the Potter College of Arts and Letters.

After 365 responses, the results are not in favor of either Ballman or Caboni. Faculty from departments all over campus participated in the survey, including the College of Education and Behavioral Sciences, Gordon Ford College of Business and Potter College.

“This survey is not particularly scientific, and has not been validated or proven reliable,” Brown said in an email that was sent out to all faculty Thursday afternoon. “Further, it no doubt suffers from some sampling bias, as all opt-in surveys do.”

Brown said in the email to faculty that 80 in 445 total vote entries were removed from the final results “in an effort to control ‘ballot stuffing,’” because some of the results came from the same IP addresses.

“Because of the way the university assigns IP addresses to machines, this may have resulted in some valid responses not being counted,” Brown said in an email. “But I think that’s better than the alternative in this case.”

The Herald contacted Brown for comment, but he did not respond in time for publication. His full statement from the email is below.

Before sharing the survey results, I would like to address a few points.  First, due my schedule today, I had to cut the survey off a little early so that I could make sure the results got out in advance of this afternoon’s meeting.  Next, this survey was designed to serve as an informal, unofficial (not affiliated with the Faculty Senate) up/down straw poll to provide a rough gauge of faculty opinion across the University.  This survey is not particularly scientific, and has not been validated or proven reliable.  Further, it no doubt suffers from some sampling bias, as all opt-in surveys do.  In an effort to control “ballot stuffing,” I deleted all responses in cases involving multiple entries being submitted from the same IP address.  This resulted in 80 out of 445 total entries being deleted (note: the percentages of yes, no, etc. votes remained virtually unchanged as a result).  Because of the way the university assigns IP addresses to machines, this may have resulted in some valid responses not being counted, but I think that’s better than the alternative in this case.  Additionally, while I sent this link only to WKU faculty, I was not able to guarantee that the survey was only available to current faculty and still maintain anonymity (which I was unwilling to sacrifice).  As far as I know, this is the case with all of the anonymous Qualtrics surveys we receive throughout the year from various sources.  Finally, my intention with this survey was to provide an overall picture, in the simplest and most transparent way possible, of the faculty’s current level of confidence in the academic leadership at WKU.  The instrument and methodology were not perfect, but I think the results are telling nonetheless.