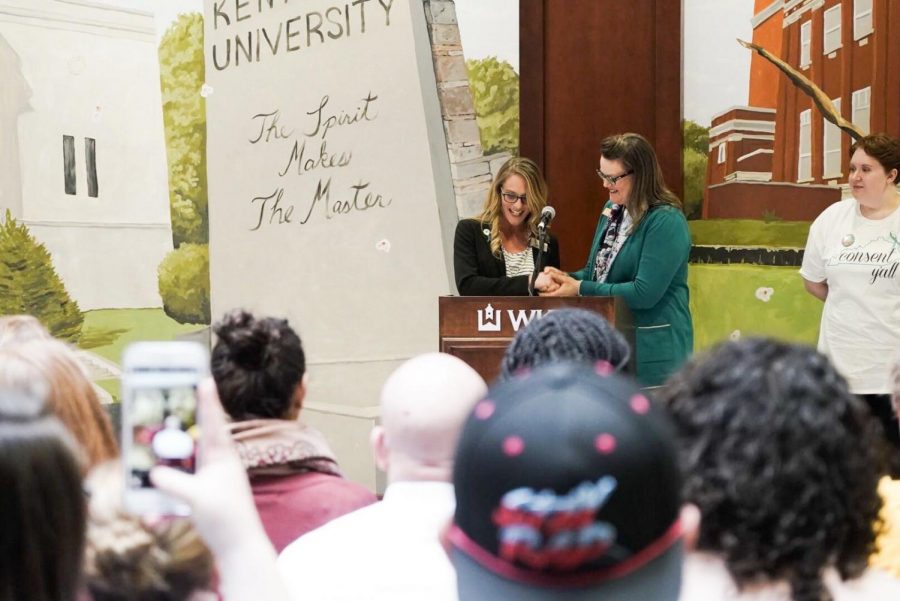 Melissa Whitley, the executive director of Hope Harbor and Dr. Peggy Crowe, the director of counseling and testing center at WKU sign proclamation to kick off the honorary sexual assault prevention month of April on the first floor of DSU on Tuesday, March 26, 2019.

“I think that they [sexual assaults] go underreported. And a lot of it — the victims are afraid to come forward for various reasons,” WKU Police Chief Mitchell Walker said.

WKU’s resources for sexual assault include the Office of Student Conduct, the WKU Police Department and organizations in the Bowling Green community such as Hope Harbor.

“We take sexual assault very serious, not just our police department, but in this community, we take that very seriously,” Walker said.

To report sexual assault or misconduct at WKU, students can email their complaint to [email protected] Students are then encouraged to meet with the director of the Office of Student Conduct, Michael P. Crowe Jr., to discuss the incident.

Walker said WKUPD sees two or three sexual assault reports a year. He said the most common type of reported sexual assault is when people go back to someone’s place after a party and one person has nonconsensual sex with the other.

Hope Harbor, a sexual trauma recovery center in Bowling Green, works to help victims of sexual assault and their families.

Londa Stockton, a community educator at Hope Harbor, said victims do not have to report a sexual assault, but there are victim advocates at Hope Harbor to help them through the process.

The Office of Student Conduct investigates the report and holds individuals accountable when appropriate, according to the procedure in the website’s student code of conduct.

“We’re here to help the victims in those cases that we have,” Walker said. “We do everything we can to protect the victim.”

The Office of Student Conduct is responsible for notifying the people involved in the situation of the report, conducting the investigation and determining if there is a violation of the student code of conduct, according to the website.

Furthermore, both parties are allowed to give a statement about the situation, and witnesses may be requested, according to the website.

Cases that violate the student code of conduct can be heard by the University Disciplinary Committee, and both parties involved will be informed of the outcome, according to WKU’s Report It website.

Walker’s advice regarding sexual assault included the phrases: no means no, respect one another and the WKUPD is there to support victims.

“They [boys] should respect females when it comes to dating and things like that and not try and take advantage of someone and to be mindful of the choices that they’re making,” Walker said.

Walker also warned of getting intoxicated at parties, as it can make girls an easier target or can cloud one’s judgment.

“If your sixth sense is saying something ain’t right, it’s probably not right, so it’s best to avoid it and get away from the situation as quickly as possible, call someone, contact the police,” Walker said.

Sexual assault has changed from what children were taught, Stockton said. It’s no longer the “guy-in-the-bushes” situation or a stranger committing the assault. Instead, she said it can be someone in the victim’s life.

“In reality, each one of us knows someone who sexual assault has affected — it’s that prevalent,” Stockton said. “It is something that affects the community. It affects each and every one of us.”

Walker said faculty and staff are generally quick to report sexual assault, adding that more reports come from them than any other group of people.

Moving forward, Walker said the WKUPD is trying to build a better relationship with students so they will feel like they can approach WKUPD about situations such as sexual assault.