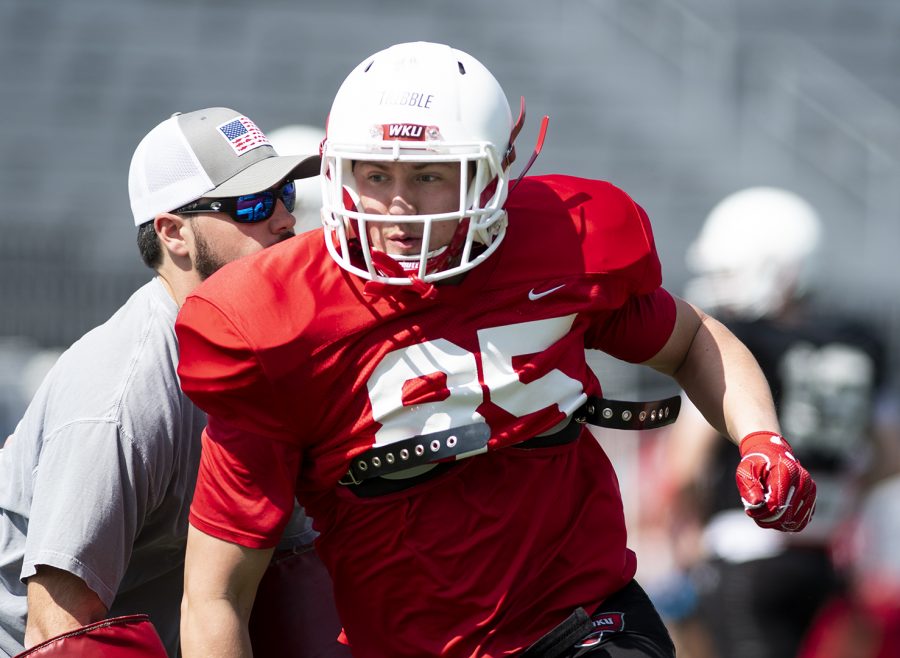 Redshirt junior Preston Tribble, participates in drills during The WKU football teams 12th Spring practice of the year at Houchens-Smith Stadium on April 6. Following Spring practice Tribble was removed from the team.

When WKU football opens its 2019 season against Central Arkansas on Aug. 29, five players that played in the annual Red vs. White Spring Game on April 13 will not take the field.

In the days following the conclusion of spring practice, three redshirt freshmen and one sophomore announced their intentions to transfer from the program, while one redshirt junior was removed from the roster. So far, Helton has escaped without any loss of production.

Redshirt freshman defensive back Jayden Patterson was the first to enter his name into the NCAA transfer portal, posting a note to his Twitter account on April 16.

“I am beyond thankful to have been blessed with the opportunity to attend Western Kentucky University,” Patterson wrote. “I would like to thank the entire Western Kentucky staff for your support and guidance this past year. I wish all of my former team mates as well as the WKU staff the best of luck on the upcoming season. With this being said, I would like to announce that I will not be returning to WKU this fall. I have decided to enter the transfer portal. Thank you.”

A native of Lawrenceville, Georgia, Patterson turned down Ball State and Georgia Southern to sign with WKU in 2018. 247Sports rated Patterson a two-star recruit with a composite score of 78. Patterson was also ranked 266th overall in the state and 257th nationally at his position, but the cornerback didn’t appear in a single game last season.

WKU’s secondary is currently loaded with a mix of veterans and talented up-and-comers, many of whom figure to play significantly more than Patterson would have.

Redshirt freshman offensive lineman Chase Farris was the second withdrawal, sharing a note with his Twitter followers on April 17.

“After talking to my family and the coaching staff I have decided it is best for me to continue my football career somewhere else,” Farris wrote. “I appreciate everything WKU football has done for me this last year. With this being said I am entering my name in the transfer portal and my recruitment is open again.”

The 6-foot-4-inch 315-pounder from Louisville enjoyed a standout prep career at St. Xavier High School. 247Sports rated Patterson as a two-star recruit with a composite score of 76. Patterson was also ranked 30th overall in the state and 159 that his offensive guard spot, but he didn’t make an appearance for the Hilltoppers in 2018.

Farris’ snaps were not on pace to increase next season either, since WKU is one of 12 programs that will return all five of its starters on the offensive line, according to a tweet from college football analyst Brad Powers.

“After speaking with my family and the WKU coaching staff I think it is in my best interest to leave WKU and continue playing the sport I love at another university,” Krause said in a note. “I would like to thank WKU for everything they have done for me this past year and want to wish all my former teammates the best of luck in their upcoming season.”

The Chicago native came to WKU as a highly touted recruit, with several specialized kicking outlets rating the left-footer as a Division I prospect at both kicker and punter.

Krause appeared in 11 games last season as a holder on extra point and field goal attempts. But Australian junior John Haggerty will likely be punting for WKU next year, while redshirt senior Alex Rinella will handle all other kicking duties for the Hilltoppers.

Redshirt freshman quarterback Drake Peer confirmed WKU’s fourth departure on April 18, retweeting a post from 100 Miles of Hate that said the signal caller had “revealed his intention to transfer from the program” and changing his bio to “WKU transfer QB.”

Peer joined the Hilltoppers as a preferred walk-on in 2018. The Knoxville, Tennessee, native did not appear in a game last year and was the third-string quarterback for the White squad in the spring game, placing him fifth on the positional depth chart at best.

In a statement released Sunday, team spokesman Kyle Neaves clarified that Tribble was not a part of the program at the time of his arrest, making him Helton’s fifth and final departure so far.

“Following spring football practices, Preston was removed from the roster and was not an active team member at the time of the incident,” Neaves said in the statement. “He had previously walked on to the team.”

Although WKU lost several players in the space of a few days, Helton will likely scour the same spreadsheet some of his former players’ names were added to in search of potential roster replacements. Helton is no stranger to transfers — he added Arkansas graduate transfer quarterback Ty Storey only three months after his hiring.

Since its inception last October, athletes across the country have entered the transfer portal due to coaching changes, lack of opportunities and more.

WKU is not immune to the trend, and transfers will continue shaking up Helton’s roster during the dead period until regular season football kicks off in about four more months.

Football reporter Drake Kizer can be reached at 270-745-2653 and [email protected] Follow Drake on Twitter at @drakekizer_.