Hilltoppers feeling blue after suffering sweep at hands of MTSU 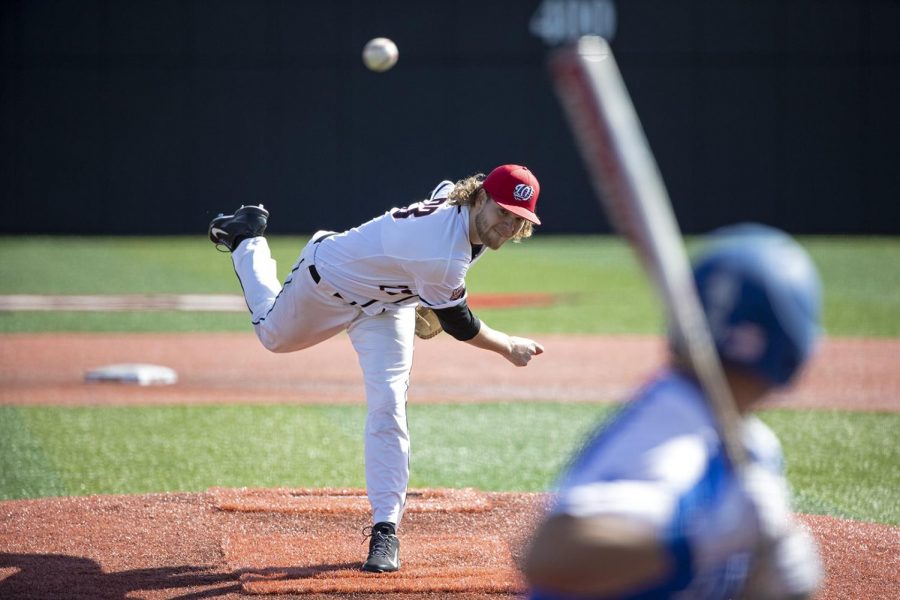 WKU pitcher Reece Calvert pitches during the third game against University of Memphis at Nick Denes Field on March 10. WKU lost the game with a score of 4-10.

WKU suffered its first Conference USA series loss this season 3-0 against Middle Tennessee State, bumping the Hilltoppers down to fourth place in the conference standings.

“I told the team that if somebody would have said that we won seven games in our first four Conference USA weekends, would we take that? And everybody in that group said we would take it. That being said, we can be better than that,” head coach John Pawlowski said in a press release. “We strive to be better than that, but it’s where we are and we have to take it and move forward.”

The first game saw the Hilltoppers down early 6-3 against the Blue Raiders at the end of the fourth inning. The pitching for the Hilltoppers kept the game close for the next few innings, but a lack of offensive production held WKU back.

A five-run eighth inning made the score 13-4 in favor of the Blue Raiders, making for the largest margin of defeat for the Hilltoppers since facing Kentucky.

Game 2 was a much closer and high-scoring affair between the teams.

The Blue Raiders had control of the game early, putting up 11 runs compared to the Hilltopper’s four after five innings of play. WKU proceeded to score five runs in the sixth, highlighted by a grand slam by junior first

baseman Richard Constantine, to pull within two, but it wasn’t enough, as the Blue Raiders ultimately prevailed 13-10.

In the third game, Middle Tennessee outscored WKU nine runs to one within the first four innings. The Hilltoppers were kept off the board for seven of the nine innings, while the Blue Raiders scored in four of the nine.

Middle Tennessee won the game 11-4 and completed the sweep.

In the absence of graduate transfer Davis Sims and junior left fielder Ray Zuberer III, the Hilltoppers were led by Constantine and redshirt freshman

Aidan Elias. “Injuries are part of baseball, but everybody practices hard and works hard to be ready for their opportunities,” redshirt junior outfielder Dillon Nelson said. “I’m happy for Richard and Aidan, they deserve every moment of their success. Those guys work hard all the time, and they’re two good dudes.”

The Hilltoppers’ next game is against the Belmont Bruins. WKU has won five out of its last six games against the Bruins dating back to 2016. Belmont

currently sits at 15-16 overall and 10-5 in the Ohio Valley Conference. The last time the two teams played each other, WKU won 15-7, scoring seven runs in the third and hitting five home runs overall for the game. The game is scheduled to begin at 5 p.m. on Tuesday at Nick Denes Field.

After facing the Bruins, WKU will head back out on the road to face Marshall. The Thundering Herd currently sits at 18-13 overall and 6-6 in the conference.

WKU has lost four of its last six, including a sweep in 2017, against the Thundering Herd. The first game will be on Friday at 2 p.m.