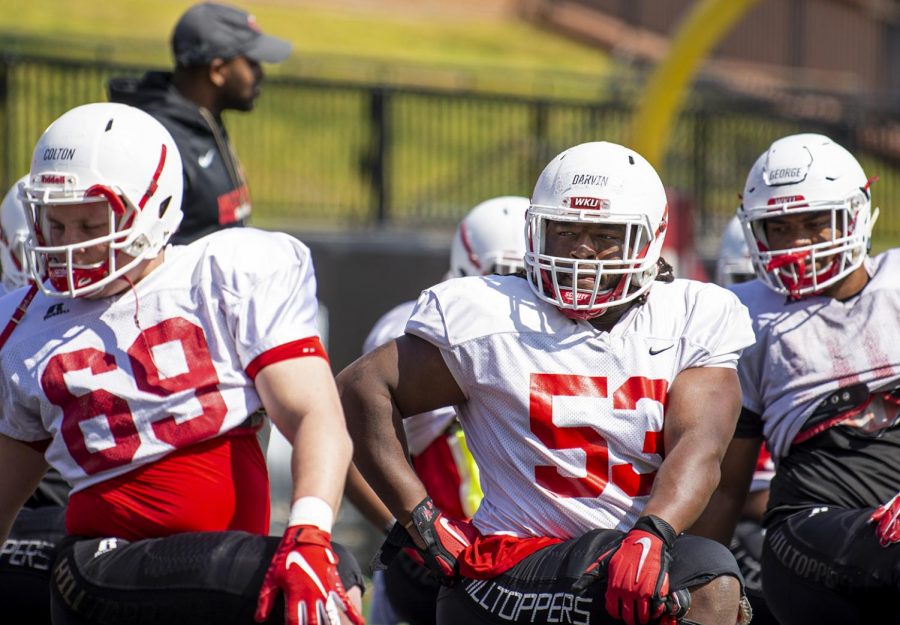 The WKU football team has less than a week until its annual spring game. Practice reps become that much more precious and important as spring ball winds down, especially for a defensive line, as many football games are won in the trenches.

“I like the intensity on both sides,” redshirt junior Jeremy Darvin said after the 11th spring practice. “I think the offense really got a lot of confidence, so their confidence is pushing [the defense] more, so you get a more fiery practice.”

WKU has 18 defensive lineman listed on its current 2019 roster. Unlike at other positions, WKU returns its best lineman from a season ago, including Darvin, junior DeAngelo Malone and redshirt sophomore Juwuan Jones.

Malone and Jones led the team in sacks with six and five, respectively, last year. Darvin was tied for fifth with 2.5 of his own.

Defensive ends coach Jimmy Lindsey said he is pleased with the progression of the returning linemen during this spring.

“DeAngelo Malone is having a good spring,” Lindsey said. “[Redshirt senior] Carson Jordan has made a ton of strides. Juwuan Jones continues to get better. As a group, I’m pleased with the progress they’ve made through the first 11 practices.”

“We’re still a young group,” Lindsey said. “But we have some experience, so hopefully now some of the guys can concentrate a little bit better in those critical situations and continue to take their play to the next level and help us be the best defense that we can be.”

With the group taking off later last season, Lindsey said he expects more from the defensive line in 2019.

“Build on last year,” Lindsey said. “I thought those young guys sorta hit their stride the last three games of the year. Just be better. Be better, and then set the tone for us on defense.”

Darvin said he has been taking charge of the young group of linemen and is trying to push the group’s play to the next level heading into the fall.

“I see myself as a leader,” Darvin said. “Because I’m very vocal. Very smart. I think two and a half years into the system, I know the defense well. So not only can I help out the tackles but also the ends as well.”

Malone was very specific with his goals for this season.

Malone said he has learned from his experience gained in 2018, and it will help him be a better player in the fall.

“I learned to use my hands better,” Malone said. “If I use my hands, the lineman won’t be able to block me like they was and just finishing, getting to the [quarterback].”

Pass rush has also been a major emphasis for this unit heading into 2019.

“Big. That’s what we’ve been harping on,” Darvin said. “We gotta get to that quarterback, especially the tackles.”

Darvin said he envisions the Hilltoppers having the best defensive line in Conference USA when it’s all said and done for 2019.