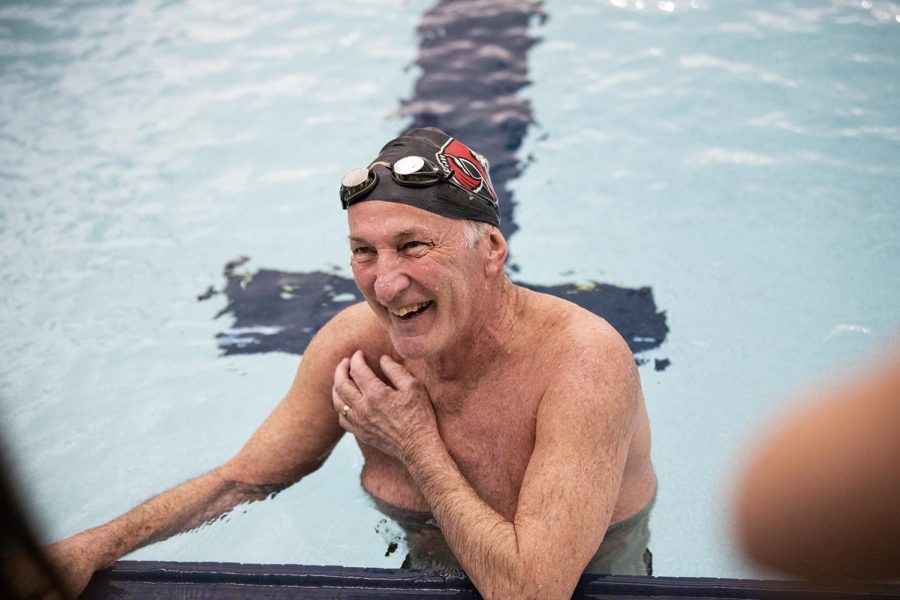 Blink and you might’ve missed the start of a tradition almost 40 years in the making.

As he’s done since his 46th birthday, former WKU swim coach Bill Powell swam the same number of lengths in the pool as his age on Saturday, April 13, starting only minutes after 8 a.m.

Now 82 years old, Powell said he believes swimming is unlike any other kind of exercise.

“I just think the best thing in the world is swimming,” Powell said. “Swimming’s weightless, and you can do it forever.”

Though Powell typically swims his birthday lengths at the Preston Center natatorium, which bears his name, he decided to swim this year at the Warren County Aquatic Center to support the RACE Aquatics Swim Club and its fundraising efforts to revamp the aquatic center. Along with working as a part-time swim instructor at WKU, Powell frequently assists the club with swim practice.

During the 41 minutes and 15 seconds it took Powell to swim the length of the pool 82 times, a crowd of around 40 comprised of club members, parents and Powell’s friends cheered and clapped loudly and awaited Powell’s finish.

He swam the lengths at a determined pace throughout, sometimes grinning before flip turning his way to another completed length, letting everyone know he was never far from having fun.  Though Powell finished the lengths at a pace slightly behind that which he completed them at last year, no one seemed to notice. Instead, almost immediately after finishing, blue and yellow leis were draped around his neck, and Queen’s “We Are the Champions” played on the natatorium’s speakers.

Amanda Brooks, a WKU chemistry instructor and mother of RACE members, sat at one end of the pool during Powell’s lengths to keep time and encourage Powell all the while.

She said Powell inspired her to begin swimming for exercise a few years ago after watching him do so while giving her daughters swim lessons.

RACE head coach Neil Romney, who also coaches the Warren County swim and dive team, first met Powell soon after starting as the RACE head coach around six months ago. He said he believes Powell is a great mentor for all his students.

Romney added that he respects Powell for what he’s accomplished despite any age-caused limitations. He said he believes Powell is a testament to facing age in a vigorous, yet sensible, way.

“It’s inspiring to me because I know, fighting that age-related decline myself, that you just keep fighting the fight, because the alternative is worse,” Romney said. “He may not swim as fast as he did the previous year, but he still has concrete goals, and he’s still pursuing them with a healthy focus.”

“He taught me to swim,” Zoellner said. “I’ve never not known him. He’s my coach.”

She said Powell’s success in swimming 82 lengths at 82 years old is something she’s come to expect.

“It actually doesn’t surprise me at all,” Zoellner said. “He’s a legend.”

“They would listen to him today,” Zoellner said. “If he had something to say, they would stand at attention, hold their breath and listen to every word.”

Born in Wyandotte, Michigan, Powell worked as a high school swim coach for 10 years before traveling to Bowling Green to kickstart the WKU men’s swimming and diving program in 1969.

He worked as the WKU men’s swim team head coach from then until 2005, amassing a record of 330 career men’s dual meet victories and winning coach of the year honors 10 times during his 36-year tenure as head coach, according to a website dedicated to Powell named CoachPowell.com.

Nash said Powell is remarkable for his effect on those he’s close to, adding that he believes Powell’s birthday lengths are much more than swimming against a timer.

“This is swimming lengths, but it’s also about his character,” Nash said. “That same level of determination and commitment he passes on to everyone he knows.”

Nash said he believes Powell’s status as a gifted mentor is due in large part to the connection he shares with his wife, Joanne “Joey” Powell.

“Coach is who coach is because Joanne, his wife, supports him in tremendous ways,” Nash said. “They have a relationship that all of us should strive for. They make it look effortless, but it takes work.”

Approaching 60 years of marriage in December 2019, the Powell’s have four children and 12 grandchildren. However, Joey Powell said swimming has gifted them a family much larger.

“Through swimming, the number of kids that have gone through our lives is just mind-boggling,” Joey Powell said. “We are very, very, very rich for it.”

Joey Powell said she believes Powell’s been able to impact so many people on account of his bountiful consideration. She included that his birthday lengths are a way to pay that same consideration to himself.

“He cares,” Joey Powell said. “He’s always done it for others, and now he’s doing it for himself.”

As for why Powell swims, Joey Powell spoke simply.

“Use it or lose it,” Joey Powell said. “He just knows that you stay active or you vegetate.”

She added that watching her husband do what he loves for another birthday is something beyond words.

Shortly after completing the lengths, Powell mentioned he rarely gets sick. He said he attributes most of this to swimming.

This wasn’t always the case, however, as Powell said he contracted chickenpox, mumps, whooping cough and measles from his three older siblings before he turned a year old. He said a family friend once told him his chances for survival looked slim during that year, but his parents would never accept any doubt.

“Excuses were just forbidden in our house,” Powell said regarding his parents’ expectations. “I never knew I wasn’t supposed to live.”

Powell said he originally began swimming as many lengths as his age on his birthdays as a way to keep his swimming exercises interesting. Though many now know of his birthday lengths tradition, what’s not as well-known is that he typically swims around 3,000 yards, the equivalent of 120 lengths, nonconsecutively every day.

“I normally do more than 82 lengths,” Powell said. “This was an easy day.”

With more than half a century dedicated to swimming and educating others, Powell said he lives to lead whenever possible. He does this by swimming and never forgetting what matters most.

“I try to be an example,” Powell said of how he best serves his students. “Gotta keep swimming. I told them, ‘That’s how I stay above ground.’”