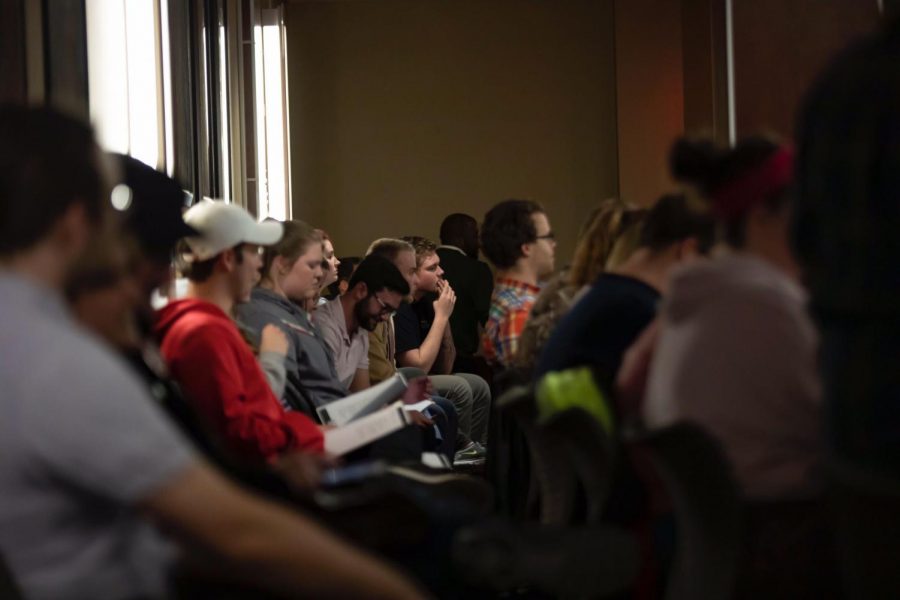 Following the resignation of Potter College of Arts and Letters dean Larry Snyder, dozens of students gathered to attend the Student Government meeting Tuesday. The students were in attendance to support Resolution 4-19-S, which was written to increase transparency in response to Snyder's resignation.

Editor’s note: This story previously stated that the SGA’s resolution for increased transparency passed unanimously. That is incorrect, as the resolution passed in a 30-to-2 vote. The Herald regrets the error.

In a tumultuous Tuesday night meeting, the Student Government Association passed a resolution to increase transparency for all decisions made by WKU.

The resolution was authored by Senators Mark Clark, Kara Lowry and Connor Hounshell, along with former Chief Justice of the Judicial Council Jacob McAndrews.

This resolution comes a week after the sudden resignation of Potter College of Arts and Letters Dean, Larry Snyder, and just a day after an SGA-sponsored forum with Provost Terry Ballman, which addressed questions from the student body.

“Top university officials need to provide explanations for such decisions as well as implement such decisions in a clear and respectful manner that protects and ensures the dignity of those involved,” read one of the resolution’s whereas clauses.

Tuesday’s meeting was also a chance for SGA President Stephen Mayer to present a nominee for the SGA Judicial Council. Mayer nominated junior Wood Brown, who was nominated for a Judicial Council position in the Fall of 2018.

“Some may say that I am overly involved to be part of this body,” Brown said, “But I can assure you all with the utmost confidence that I can delegate my time and prioritize SGA as if it were the only thing on my resume.”

Brown’s nomination was bookended by lengthy debate and questioning, particularly with regard to his lack of involvement in SGA. Other concerns were raised surrounding the viability of his nomination. If appointed, Brown could only serve one year on the Judicial Council.

Brown’s nomination was eventually struck down in a 17-to-11 vote. This was possible because all appointments made by the President must reach a two-thirds vote, or 66 percent, according to the SGA bylaws. Brown’s vote only reached 50 percent, resulting in its failure.

SGA passed a bill to create a Senate seat for first-generation college students. The bill was authored by Senator Carlos Gomez and Public Relations Committee Chair Ashlynn Evans. The bill passed with a unanimous 33-to-0 vote.

A resolution was also passed to increase benefits for transgender students. The resolution, which was brought to the Senate by the Transgender Non-Binary student organization, called for WKU students to have their preferred name “appear in dominant form on class rosters, student ID’s and email addresses.”

This resolution also passed in a 33-to-0 vote.

SGA meets every Tuesday at 5 p.m. in the Senate Chambers in Downing Student Union.