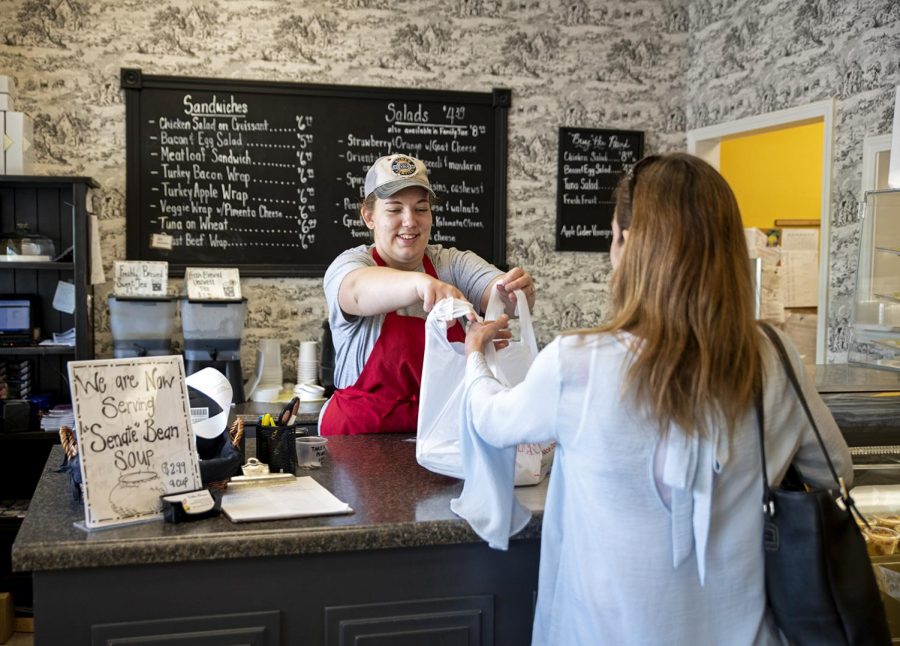 Arrika Peterson, who has been working at the restaurant for about two months, serves customers at Chickadee’s Comfort Food To Go. Chickadee’s offers home-cooked meals, salads, sandwiches and sweets.

If a metal chicken sculpture and chicken-shaped sign that reads, “I get by with a little help from my Hens,” immediately visible upon entry, aren’t enough of a hint, the name Chickadee’s Comfort Food To Go is sure to let everyone know what’s on the menu.

Specializing in meals such as chicken pot pie and chicken salad sandwiches, Chickadee’s has been serving those in Bowling Green looking for a taste of home for nearly the past eight years. Chickadee’s co-owner Debbie Thomas said she believes Bowling Green is a great location for the business.

“I love being in a smaller town because we know almost all our customers,” Thomas said. “Rarely does anybody come in here that we haven’t seen before.”

Born in Bowling Green, Thomas left the city for Louisville after graduating with a degree in retail buying from WKU. She lived there alongside her husband, Brad Thomas, also a WKU alumnus, for nearly 30 years. After retiring early on account of downsized businesses, the Thomases decided to return to Bowling Green to be closer to family and try their hand at the food business.

“We ended up having to leave Louisville, and I said, ‘OK, this is, like, a sign — this is meant to be — we’re gonna try this — we got nothing to lose,’” Thomas said, as she had helped with a friend’s catering business in Louisville prior and had the idea to start her own with a unique focus.

Rather than deliver food to large groups for special events, Thomas said she envisioned a business designed to feed families on a more casual basis. She aimed to do this by making meals in-house daily intended to be picked up and reheated by mothers and fathers on the go.

“Our concept is a little bit different than anything else going on in town,” Thomas said. “That really is the bulk of our business — is our dinners to-go, made fresh here.”

In order to best make this possible, Thomas said she and Brad Thomas often begin prepping food for the day ahead as early as 7 a.m. throughout the week, using the weekends as a time to buy ingredients. Thomas said she believes this is vital to ensuring all food is fresh every day.

“Everything needs to be as fresh as possible,” Thomas said. “It could be macaroni in a box, but it’s not.”

Though customers may buy sandwiches, salads and soups to eat in-store, along with a variety of made-from-scratch baked goods, most food at Chickadee’s is refrigerated immediately to be sold as reheatable. This food is packaged with a label containing information regarding all ingredients used in its preparation and exactly how one should reheat it for proper consumption.

Joy Wheeler, Thomas’s sister, has been helping at Chickadee’s since it opened and recently began working there on a more full-time basis. She said she initially didn’t realize how much work goes into the business’s daily upkeep.

“It’s hard work, but it’s very rewarding,” Wheeler said. “At the end of the day, you see the progress you’ve made, the cooking sort of comes together and you feel like you’ve accomplished something.”

Thomas added that it’s always been the mission of Chickadee’s to serve those who might not have time to serve themselves.

Per Chickadee’s website, which offers a daily look at what’s available to be ordered and picked up in-store, “Whether you’re a mom bouncing between three different sports or an empty nester, Chickadee’s is your answer.” Thomas said this often rings true for students simply in need of some home cooking as well.

“Almost every semester, we’ll have somebody over there who is missing his momma really bad, and he’ll come over here and get something to eat,” Thom- as said, mentioning a living area nearby Chickadee’s that tends to appeal to students.

Though Thomas said she didn’t often cook when she was younger, she said she and Brad Thomas both learned to cook while living in Louisville by doing so together. As she’s been able to make use

of various family recipes since opening Chickadee’s, Thomas said she enjoys how cooking’s allowed her to connect with her family’s history.

“It’s kind of taking me back to my roots,” Thomas said. “A lot of the recipes I use really are my grandmother’s recipes and my mom’s recipes.”

Thomas said she believes this has been crucial to her business’s success. She included that she values when customers are able to recall their own family’s roots while eating the food she and her family were raised on.

“People will say to me, ‘Oh, I think your strawberry cake is the same recipe my grandmother used to make,’” Thomas said. “Yeah, that’s a really good feeling.”

Thomas added that she believes many

customers return to Chickadee’s for its emphasis on family, which she said ex- tends beyond passed-down recipes and handmade chicken pot pie.

“Not only are we providing them food, in a lot of cases, I feel like we’re providing them friendship and a connection,” Thomas said of Chickadee’s customers. “Truly, I believe there are people who come in here just to carry on a conversation.”

Chickadee’s is located on 1200 Smallhouse Road and is open from 11 a.m.-7 p.m. on weekdays and is closed on weekends.