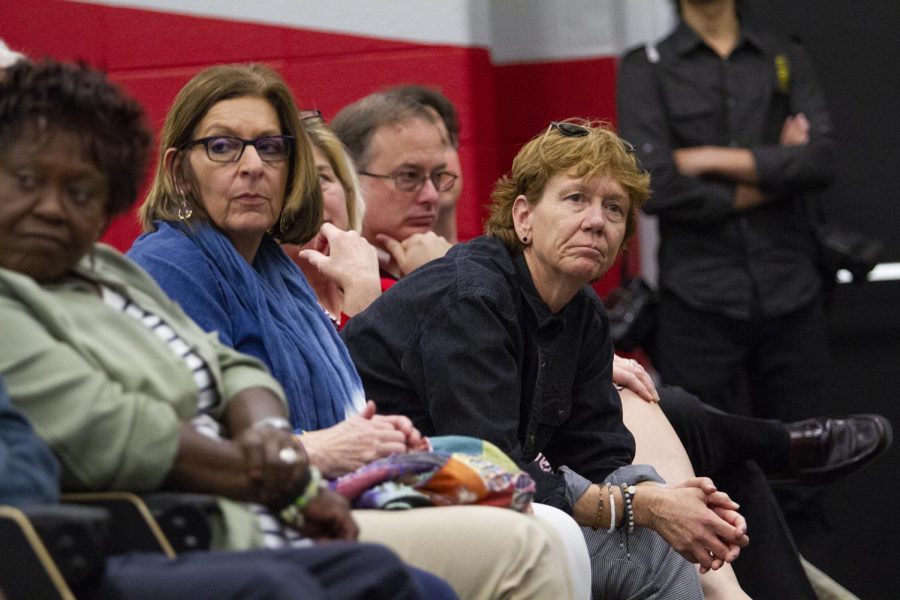 Molly Kerby, far right, associate professor in the Department of Diversity & Community Studies, listens to discussion during the Faculty sSenate meeting that took place on April 4.

The University Senate called a special meeting Thursday that ended with a passing vote for a resolution of no confidence for Provost Terry Ballman following the resignation of former dean of Potter College of Arts and Letters Larry Snyder.

The Senate convened Thursday afternoon in Grise Hall with seats open for students and members of the public to attend. Atkinson began the meeting with a resolution presented by the faculty senate that began the motion for a vote of no confidence. Mac McKerral, journalism professor, seconded the motion.

The resolution passed by the faculty senate was introduced by Art professor Guy Jordan and read as follows: “Be it resolved that the University Senate has no confidence in the leadership of Provost Ballman. This will be voted on by secret ballot.”

The resolution passed with passed with 50 votes in favor, 10 against and three abstentions.

“It’s the most serious thing that the university senate can do, and the president will get the results of that,” Jordan said.

Jordan made additional statement after the meeting adjourned.

McKerral explained that the resolution was about more than the incident involving Snyder’s resignation as Potter College dean before the vote, and explained that the fear of retribution made it difficult for many to consider attending.

“The demand for change is an expectation, and not an option,” McKerral said.

McKerral spoke about all the events that occurred to get the university to this point.

“We’ve been told constantly under this administration that as faculty members we need to make tough decisions, well we made one, now they’re gonna have to make one,” he said.

Many senators voiced their concerns about recent events and others read prepared statements from their departments. English professor Alison Youngblood spoke on the fear of retribution among many untenured faculty and the timing and circumstances of the resignation of Snyder.

“I think many faculty members here stated they were disappointed that President Caboni addressed the Board [of Regents] directly and still hasn’t addressed faculty over this beloved loss of a great leader, but not just about Larry,” Youngblood said. “I think the thing that we all hope the most is that Caboni will address us specifically because we are his faculty.”

Members of the faculty and staff said that they mainly heard about university news from sources outside of WKU administration.

Student Body President Stephen Mayer said that while he supported the vote of no confidence by the University Senate, he thought a strongly worded censure would have been appropriate.

“I think that while she is a new provost she is going to make mistakes, but unfortunately I think she has made too many,” Mayer said.

When the resolution passed and the meeting adjourned, student protestors who were seated in the audience said they appreciated the action made by the Senate.

Audra Jones, a junior musical theatre major, said that it was refreshing to see that many people present at the meeting applauded student involvement.

“I genuinely think that this vote of no confidence against the provost would not have happened this quickly had we not protested the way that we had,” Jones said. “I hope that the provost and President Caboni see the results of this and understand that things need to change.”

Alison Langdon, interim assistant dean of the Potter College, spoke about her concern that President Caboni would continue remaining aloof in lue of these developments.

“This is not a time for him to be tucked away in a tower,” Langdon said in regard to Caboni.