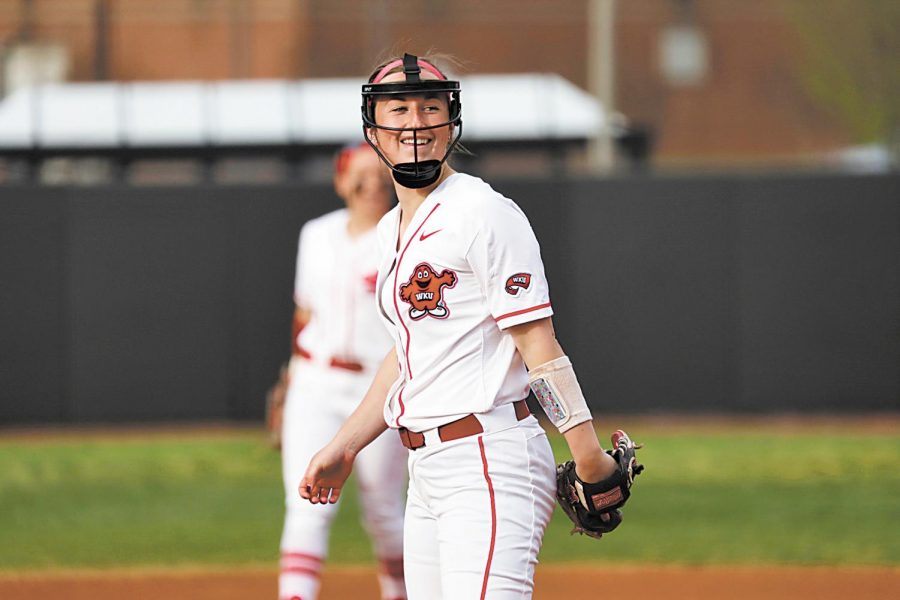 Junior pitcher Kelsey Aikey is WKU's all-time leader in saves and has accumulated an 8-6 record this season.

“There’s not a replacement for confidence,” Tudor said. “She is a confident player, and we feed off of her.”

As a junior in high school, the Iowa native was originally committed to play at a junior college just an hour and 45 minutes from her home in Cedar Falls, but she signed with the Hilltoppers in 2016.

Now a Division I athlete who describes herself as homey and very close with her family, Aikey recalls her move to Bowling Green.

“When I got the opportunity to come out here and got a chance to look at the campus and my teammates and my coach, I just fell in love.” Aikey said. “So it’s definitely a transition, but you get used to it.”

After graduating from a class of 140 students at Waverly-Shell Rock Senior High School, located in Waverly, Iowa, Aikey arrived on the Hill to a surprise.

“You go from being the one to coming to college and nobody knowing you or just being average when you get here,” Aikey said of her transition from being a star player at Waverly-Shell to just another face at WKU. “But you just buckle down and get used to it.”

Aikey did just that, posting an exceptional freshman season in 2017 during which she made the Conference USA All-Freshman Team, C-USA Commissioner’s Honor Roll and had an outstanding performance in the circle at the 2017 conference tournament. The freshman pitched 11.2 innings to allow no earned runs and entered a bases-loaded, no-outs inning to allow no runs and get the Hilltoppers out of the inning.

“A lot of raw talent, a fighter — those are the things I saw in her,” Tudor said. “She was put in a lot of tough situations her freshman year, and I think it made her tougher.”

The junior, having only built on that momentum, has proven herself as a key player in the 2019 season. So far this season, Aikey has been named C-USA Pitcher of the Week twice in addition to leading the conference in saves, now holding records for the most career and single-season saves in WKU softball program history.

Aikey’s success this season has helped the Hilltoppers record the best start to a season in program history. They have recorded three C-USA series sweeps, are 27-8 overall on the season and 10-2 in conference play.

Tudor and her players have been asked repeatedly over the season what makes this team so special. Aikey said she believes there has been a change of dynamic within the team that has facilitated its success.

In addition to filling the role as starting pitcher on many occasions, Aikey has filled the high-pressure role of a relief pitcher during her career on the Hill.

“When I’m in that moment, and it’s 3-2, bases loaded and we’re up by one, just like telling myself that I’ve worked so hard for this moment,” Aikey said. “And kind of going back to your teammates being there for you, they tell me all the time that they thrive when I pitch.”

While Aikey’s motivation in the offseason, maturity and adaptability are traits that Tudor credits her achievements to, Aikey attributes much of her success under such a high-pressure role to the support of her teammates.

Aikey and the Hilltoppers will be back in action on Saturday at home against North Texas.