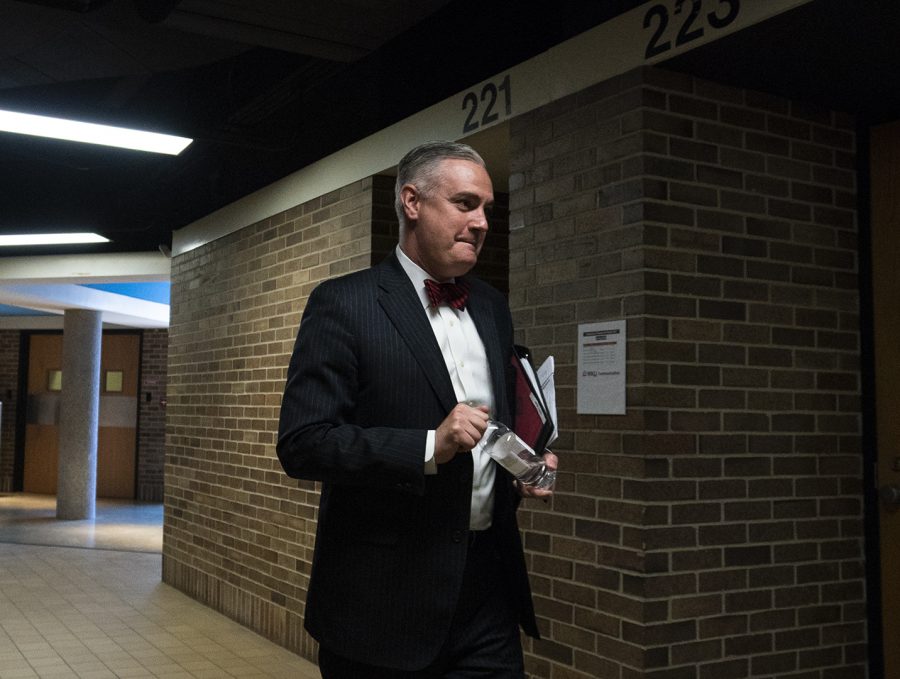 WKU President Tim Caboni walks out of a conference room in FAC after meeting with the heads of each department to discuss moving forward after Larry Snyder's resignation on Tuesday, April 2, 2019.

“As you might imagine, there are conversations on campus around the dean’s resignation and the provost, and so I wanted to go ask them for their opinion about where we are and how we move forward,” Caboni said after the meeting. “That’s what I did.”

Caboni said there were a range of perspectives offered by the department heads during the meeting and that his purpose for the meeting was to listen.

“These conversations are always difficult, but I’m thankful for the honesty and directness of those department chairs,” Caboni said. “I think where we wound up is not at a solution or a resolution, but I was thankful to hear their perspective, and they heard from me that I and the provost want to work together.”

Caboni declined to go into specifics about what was discussed during the meeting.

Head of the Department of Communication Helen Sterk said she thought Caboni was responsive and the conversation had “good give and take.”

“We wanted to address our concerns with her [the provost’s] leadership, and from my point of view, for her inability to see consequences that might follow decisions that she makes,” Sterk said.

Caboni confirmed they did touch on the Comprehensive Academic Program Evaluation during the meeting. CAPE is the academic program review that occurred during this year to review and evaluate WKU’s programs. The results of the review are expected to be finalized and shared publicly next week.

Art Department Head Kristina Arnold said she appreciated having Caboni come as a campus leader and listen to their concerns.

“One of the things we were able to articulate was that this isn’t a one-off problem, and that there’s a pattern of bad decision making we’re really concerned about on campus leadership,” Arnold said, referring to Snyder’s resignation. “It’s really difficult to see a way forward from that.”

When asked which specific leadership she was referencing, Arnold said the provost had been “making some big missteps that seem self-inflicted.”

She said CAPE was mentioned during the meeting, but it was not its main focus.

“It’s a sustained pattern,” she said. “We’re in a time of change and we need a really strong leader, someone who can articulate their vision for our college and the university.”

When asked about the reason for Snyder’s resignation, Caboni said “Any answer I give to you or anyone else as we’ve learned is likely to be unsatisfactory.”