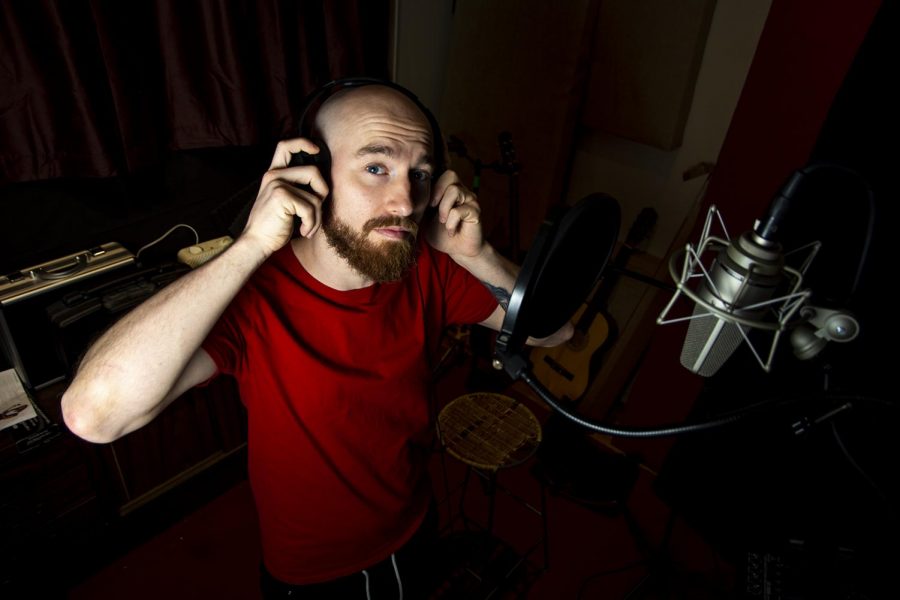 Each day, Allen Witcher thinks about how he could be sitting in a prison cell. The fact he is now able to make music is something he refers to as a miracle.

Following a first-degree robbery charge in 2011, Witcher was incarcerated until 2015. While in prison, Witcher said he learned more than he had during his time in college.

Witcher, 28, said he “dove in head-over-heels” to his pursuit of music while incarcerated. He said his time confined in a single space taught him patience.

Witcher said he taught himself to read music and studied music theory.

“All I did was rap and write,” Witcher said.

Among the few items Witcher was allowed to have with him in prison was a collection of CDs, including titles from Jay-Z and Eminem, some of his musical influences, and a keyboard he’d saved up for.

Witcher said he’s drawn to hip-hop because he believes it’s “poetry in motion.” Witcher said he started writing poetry when he was 12 as a way of coping with his father’s death, and it wasn’t until he was in his late teens that he changed his poetry into hip-hop.

Witcher’s cousin Jordan Witcher said he and Witcher have been close since childhood. Following Witcher’s prison sentence, Jordan said it was hard for them to remain in contact.

The cousins ended up meeting again for the first time after Witcher’s prison sentence in a studio in Bowling Green where Witcher worked. Jordan said he couldn’t even tell Witcher had been incarcerated.

Now, Witcher creates music under the name The Vinci and considers himself an “advocate for second chances.”

“As far as my past goes, hopefully people can learn from that and not repeat the same mistakes and not be defined by your past, you know,” Witcher said. “You can make a positive change, and people do change.”

Jordan said he believes Witcher has changed for the better.

“He really, really has changed as a human,” Jordan said. “He’s come from hell to heaven, and it’s — I’m really proud of him.”

Along with making music, Witcher does freelance video work under the name Leotheshooter to financially support his artistic endeavors. He said he enjoys making his own schedule, being creative and not being “put in a box.”

Justin Eckerd, the owner of NF Records, said Witcher’s work both as Leotheshooter and The Vinci play into each other because he makes his own music videos.

“Everything that he does, his whole artistry, is curated by him and his two personas,” Eckerd said.

The names of Witcher’s “two personas” are both derived from Leonardo da Vinci. Witcher said he was inspired by how da Vinci worked in multiple fields, including the arts and sciences. Witcher said he wanted to do that in a modern sense by writing, engineering his own music and making music videos and films.

Eckerd said he believes Witcher mirrors da Vinci because of his tendency to think logically and not make decisions based on emotions. He said Witcher meticulously works at improving his music.

Aside from their working relationship, Eckerd said he and Witcher are good friends. He said Witcher was key in building NF Records.

“I haven’t had a really solid friend like that in years, and he’s really shown himself to be a very trustworthy person, really good friend and brother,” Eckerd said.

Witcher described his first full-length album, “Earthlings,” which was released April 5, as a collaborative concept album. Witcher and Jordan worked together along with Eckerd to craft the album.

Witcher said they approached the album’s concept by imagining they were visiting Earth as outsiders.

“That was us trying to find a balance of the spiritual and the earthly,” Witcher said.

The process of creating the music was based on feeling, Witcher said. He said they would play off of each other’s work and would often yell lyric ideas at each other.

Jordan said making the album was the “most fun experience” he’s ever had.

As a whole, “Earthlings” took about two years to produce, with most of the time dedicated to mixing. Witcher described himself as a perfectionist, so being able to get the final product out was a “weight off his shoulders.”

Though Witcher said “Earthlings” was focused on appealing to a mainstream audience and combined the work of multiple artists, he has another album in the works that is more personal to him.

Witcher, laughingly, said his solo project would be “pretty weird,” combining hip-hop with jazz and soul. But his project isn’t one based on catering to an audience but rather based on his feelings, he said.

Eckerd recalled a conversation where Witcher said, “We made the stuff everybody wanted to hear, now we’re making the stuff that matters.”

Jordan said he has heard four songs from Witcher’s personal project. He said it gave him goosebumps.

“He really, really reached down deep into the dark side of himself,” Jordan said. “When he lived that dark side, he lets you live it with him through his music and what he went through.”

Witcher said his ultimate goal was to create, make a positive impact on the world and follow the mantra “leave it better than you found it.” Each day, he aims to be better than he was yesterday.

Features Editor Laurel Deppen can be reached at 270-745-6291 and [email protected] Follow her on Twitter at @laureldeppenwku.