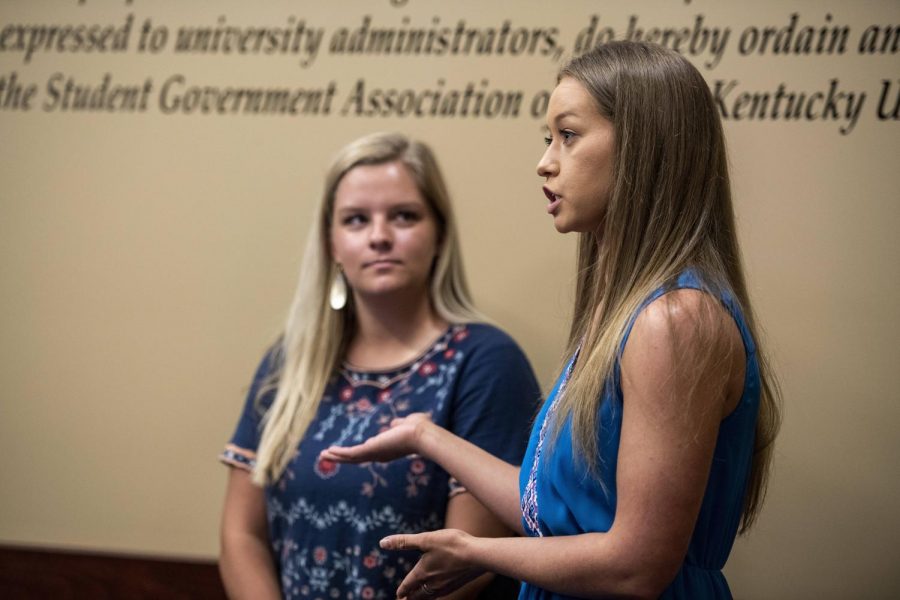 Amanda Harder, left, and Mary Fyfe, right, speak about a resolution they authored a to add a five dollar fee to student tuition to support the College Heights Herald. The resolution was debated but ultimately voted on and passed during a meeting in Senate Chambers on April 23, 2019.

WKU’s Student Government Association voted Tuesday to approve a resolution which would install a $5 fee for WKU students to financially support expenses for the College Heights Herald, according to the resolution’s description.

“As students who are involved in government, I know you all value the truth,” Fyfe said, “And that’s what the Herald provides.”

The resolution claimed a student fee service is not uncommon among other universities throughout the country.

Harder said SGA has passed legislation in the past that voiced support for the Herald in the ongoing lawsuit between the Herald and WKU.

“This bill is an encouraging step in the right direction to provide financial support to the Herald so our students can continue doing quality journalism,” Heichelbech said. “We’re excited to know that people pay attention to and value the Herald’s presence at WKU.”

Senator Logan Hornback said while she has many fees in her tuition, she supports the resolution.

“This is a fee I can get behind,” Hornback said. “At least we know it will benefit the rest of the students.”

The resolution was approved in a 23-to-1 vote.

Two representatives from the Indian Student Association presented a bill at the meeting. The bill called for SGA to allocate $700 to provide food for ISA’s annual Holi festival. The bill was co-authored by Senator Kara Lowry. The bill was passed in a 18-to-1 vote.

Sustainability Committee Chair Jayden Thomas presented Bill 33-19-S, which called for funding to be paid to Downing Student Union. The money covered the cost for the Earth Day festival that took place in DSU. The bill was approved in a 20-to-0 vote.

The Student Senate also elected Senator Nathan Terrell as the new Speaker of the Senate in a 15-to-11 vote. Both Barr and Terrell gave speeches before the vote took place.

“I’d like to utilize the senate to communicate with students,” Barr said, adding that he wants to help SGA improve through building working relationships. “If we want [SGA] to thrive, we have to work together.”

Terrell said as elected speaker, he will work alongside the SGA committees to ensure full debate and examination when it comes to senate bills. Terrell also cited the need to improve retention rates among SGA senators.

Current Speaker Asha McWilliams declined to run for re-election as speaker. McWilliams said she believes that she has done enough to lead SGA and it is time for a new leader.