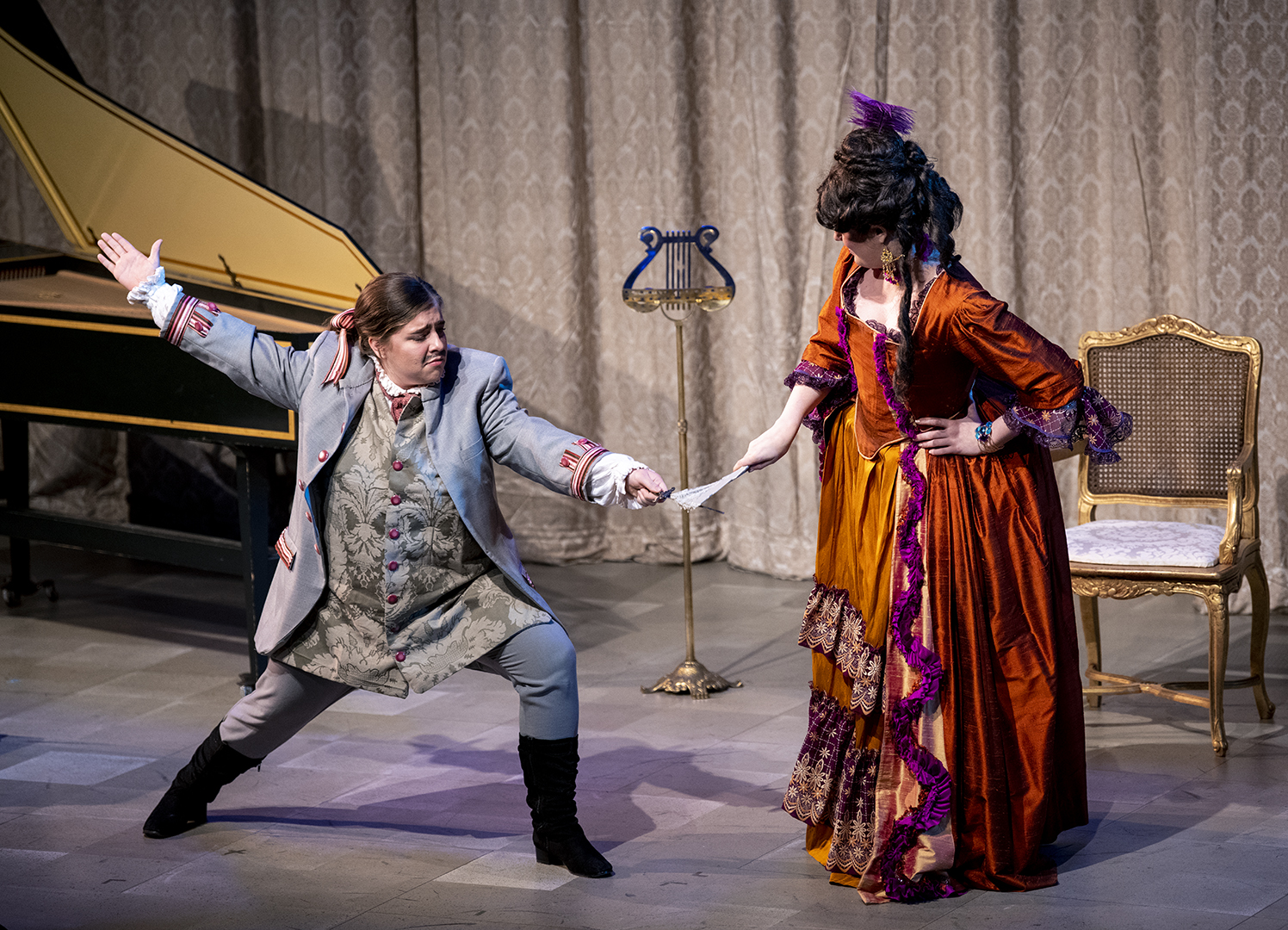 Student actors and actresses from WKU’s theatre department perform “La Canterina," or “The Diva” in English, in collaboration with WKU’s Department of Music on Saturday, April 6, 2018, in the Russel H. Miller Theatre in the Ivan Wilson Fine Arts Center building. The comedy opera, originally written by Joseph Haydn, tells the story of a mother and daughter navigating their way through tricky 18th century romance.

This year’s collaboration between the WKU departments of music and theatre and dance was hardly what comes to mind when one pictures an opera.

The performance consisted of Joseph Haydn’s opera “La Canterina,” which features a young woman with a flair for the dramatic who manages to win the hearts and fortunes of two men amid frequent fainting spells, and W.S. Gilbert and Arthur Sullivan’s “Trial by Jury,” a comedic opera originally set in a 19th century courtroom.

Colby Clark, a Bowling Green senior, played the bailiff in “La Canterina” and the courtroom sketch artist in “Trial by Jury.”

“‘Trial by Jury’ is hysterical, and it’s totally outrageous,” Clark said. “There’s a wedding between a bride and groom, and at the altar the groom turns tails and runs, so the bride calls a court together to sue the groom for leaving her at the altar.”

Clark said the setting of “Trial by Jury” was moved from the 1800s to the 1980s, and WKU’s performance of the opera contained references to Bowling Green and Cherry Hall that did not appear in the original.

Clark said that while the costuming and set looked different than it would have in the original version of the opera, “the story itself maintains its integrity.”

“Basically, this woman got stood up at the altar by her fiance,” Chapman said. “The whole jury and the whole courtroom is in love with her, so they kind of ignore the fact that she’s a little bit aggressive.”

In keeping with the shift of time period to the 1980s, the members of the jury embodied various eighties stereotypes.

Carol Jordan, an instructor in the Department of Theatre and Dance, directed both operas.

“It was my first time directing an official opera,” Jordan said. “For me, that was exciting because it was a whole new genre with new conventions.” Jordan also said expanding into a new format taught the students valuable skills. For instance, no microphones are used in operas, so performers had to practice projecting their voices over the full orchestra. “[Opera] is an incredibly valuable experience,” Jordan said. “It’s a slightly different kind of singing than traditional musical theatre singing, and to get that kind of training and versatility,

Walker stage managed the production. “Being a stage manager for an opera is different, because you have to take care of not only just the script and the actors memorizing their lines but everything with the music as well — any choreography that’s going on,” Walker said. “Every single component all comes together.”

Walker said she also enjoyed the collaborative aspect of the production. In the beginning, she said rehearsals were only with the music director, but once staging began, the actual director was added.

“It was just interesting to see them collaborate together on both their strengths and bring it all together for one gorgeous performance,” Walker said.

Emily Tuverson, a musical theatre student, played a reporter in “Trial by Jury,” the second opera in the show. She said she believes the operas defied many audience members’ expectations.

“We’ve had people say, ‘Oh, I’ve never been to an opera before, but this one was really funny,’” Tuverson said.

Jordan said she believes some people have misconceptions about opera being only for “high-class” individuals.

“These are very accessible, they are very entertaining,” Jordan said. “They are not high, muckety-muck kinds of shows that you have to be an elite opera snob to understand.”