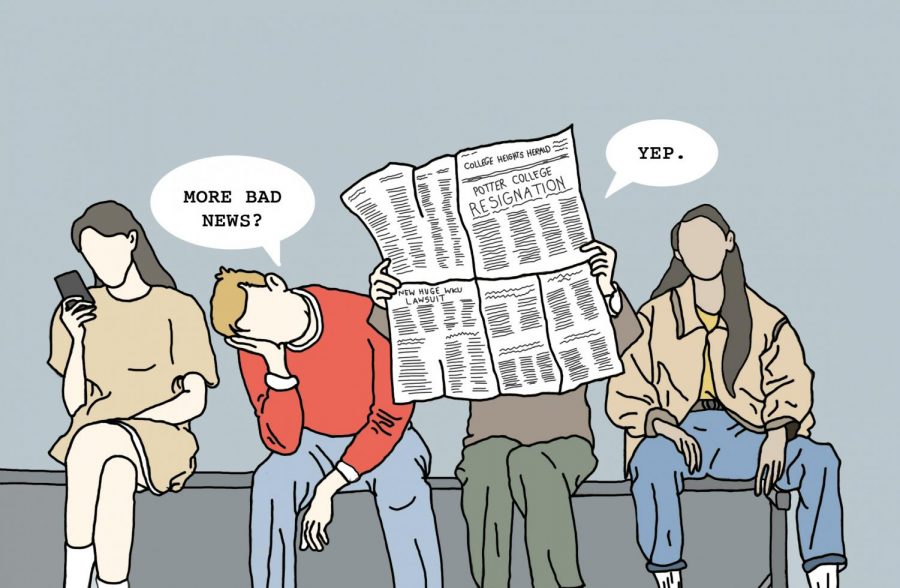 Issue: The sudden, surprising resignation of Larry Snyder, the former dean of Potter College of Arts and Letters, came with no true explanation from President Timothy Caboni or Provost Terry Ballman, causing fear and concern for both faculty and students.

Our stance: WKU has mishandled Snyder’s resignation at every step, and any backlash it receives because of the situation is warranted.

An abrupt resignation from a dean who appeared to be supported by nearly everyone he worked with is enough to cause worry, and campus leaders creating confusion by not giving competent explanation for the decision is reason enough to be in dismay.

Last week, President Timothy Caboni commented on the resignation in an email to the WKU Board of Regents.

“I cannot go into details around Larry’s resignation because it is a personnel matter and we don’t discuss those publicly no matter the interest,” Caboni said in the email. “However, you should know that every dean serves at the pleasure of the provost and that it is in her discretion to make a change in academic personnel, for whatever reason she deems appropriate.”

Jane Olmsted, the department head of diversity and community studies within Potter College, also said Snyder was “told to resign.”

A leader at any level is expected to give an adequate explanation any time they make a significant change whether it is a president declaring a policy change or a coach announcing a new starting quarterback. Respect and trust are not earned when people are expected to blindly accept major transitions.

The absence of clarity in the situation has also led to multiple student protests with more planned in the future. While there may not be hordes of students voicing their worries, student protests still reflect poorly on a university no matter how many take place in it.

Even the attempt to replace Snyder has already been mishandled.

Immediately following the meeting where Snyder resigned, Ballman announced in an email that Sally Ray, the former chancellor of WKU’s Glasgow campus, would become the interim dean of Potter College, only for Ray to decline the role just three days later.

Barry Kaufkins, an instructor of folk studies and anthropology, said he thinks other faculty members fear expressing their displeasure because it could potentially get them fired.

With these type of thoughts going around Potter College, who could blame Ray for declining to take the position?

Ballman participated in an open forum on Monday in the SGA Senate Chambers where she was questioned by students about Snyder’s resignation. She responded with “no comment” when one student asked why Snyder’s resignation was initially presented as voluntary before it became more apparent that he did not simply resign. Giving vague answers with no real substance appeared to be her theme for the session.

Withholding an explanation creates speculation, and it seems like no coincidence that a dean who championed liberal arts programs leaves their position soon after the announcement that pop culture and foreign language programs are being cut.

Building a new dorm and renovating a library won’t help WKU with enrollment if it continues to invite bad press upon itself.

Besides the unexpected turn of events, WKU is also suing its campus newspaper for trying to uncover sexual harassment and sexual assault information in the age of #MeToo and #TimesUp and is also involved in another lawsuit with former Student Government Association President Andi Dahmer after she accused it of playing a role in the harassment she received while in office.

Whenever the appropriate amount of information is released about Snyder’s resignation, it still won’t make up for the colossal mismanagement of the situation up to this point. Generating fear in faculty and students hurts campus morale, and it will only continue to get worse until fault is admitted.

If WKU was going to lose a dean, the announcement should have come with a statement of reasons instead of expecting everyone to accept receiving bits of information at a time.

An overall lack of transparency has plagued the Snyder resignation just like it has with WKU’s ongoing lawsuits with the Herald and Dahmer. It’s setting a precedent that no university should want to be associated with.

WKU’s decision-making process in situations like this appears to be smoke and mirrors, except most of the mirrors are stained with controversy.