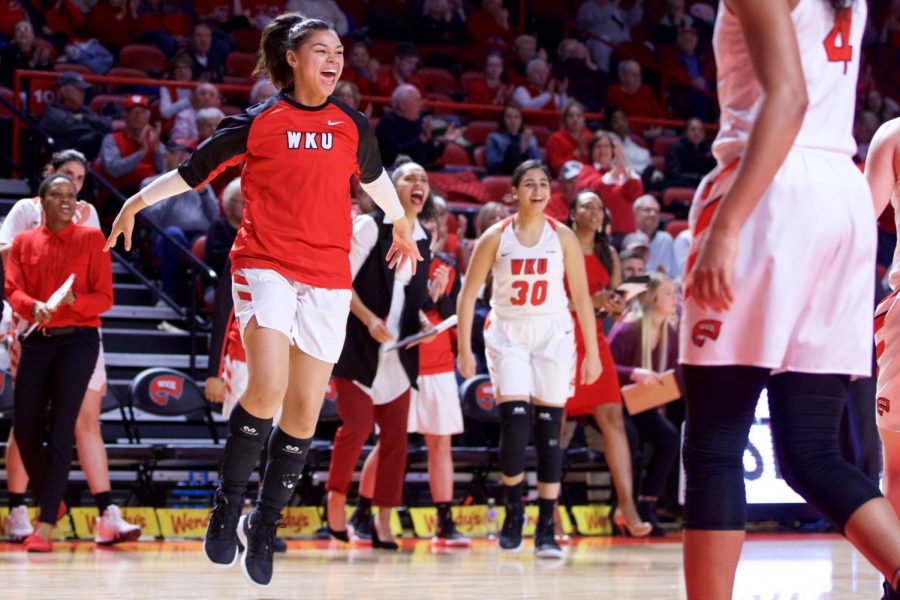 Freshman center Kallie Searcy jumps with enthusiasm for the WKU squadas a timeout is called by Middle Tennessee State during the Lady Toppers' last home game of the season in Diddle Arena on March 7 in Bowling Green. The Lady Toppers bested MTSU 67-56 and head on the road for the Conference USA Tournament next week in Frisco, Texas.

The WKU women’s basketball team clinched the fourth and final first-round bye in the Conference USA Tournament on Thursday evening, as WKU took fate into its own hands and defeated archrival Middle Tennessee on senior night.

“I think we had great defensive intensity that we’ve been kind of lacking the past few games,” Creech said postgame. “We just really stepped it up on the defensive end and I think that’s really what carried us in this game. Our defense kind of created our offense for us tonight.”

Senior guard A’Queen Hayes opened the game with a jumper for MTSU, giving the Blue Raiders an early 2-0 lead. After freshman guard Meral Abdelgawad tied the game 4-4 at the 7:12 mark, the Lady Toppers rattled off a 12-2 scoring run that was uninterrupted until Hayes put MTSU back on the board for the first time in over three minutes.

Both squads struggled to score in the closing minutes of the first frame, as WKU had no field goals in the final 3:03, while MTSU had zero makes from the floor in the last 2:34.

The Lady Toppers came out firing in the second quarter, as Givens nailed a three-pointer and Creech sank a layup, putting WKU in front 21-10.

The Blue Raiders replicated the same sequence of makes to cut their deficit to six, which is about where MTSU was able to hold itself for the rest of the period.

Givens pushed the Lady Toppers’ lead to 10 at the foul line with 2:46 left to play in the half, but the Blue Raiders refused to go away, sinking a 3-pointer.

WKU got four of its last five field goals to fall, while MTSU drilled all three of its last three attempts from the floor in a high-scoring second period.

The Lady Toppers led the Blue Raiders at the halftime break, 30-37.

Sophomore forward Raneem Elgedawy went to work early in the third period, scoring seven of WKU’s 10 points prior to the third quarter media timeout at the 4:57 mark.

Despite Elgedawy’s valiant efforts, the Lady Toppers could not extend their lead beyond seven points, which allowed MTSU to get back within two at the 1:05 mark after sophomore guard Anna Jones sank a 3-pointer at the top of the arc.

Not to be outdone, Creech pulled up and nailed a buzzer-beating jumper to put WKU ahead 51-47.

WKU continued to push, as Givens knocked in a layup and a jumper on back-to-back possessions for the Lady Toppers early in the fourth quarter. An Abdelgawad 3-pointer with 7:36 left capped off a 9-0 start for WKU and forced an MTSU timeout down 60-47.

The Blue Raiders got to within 10 points one final time, as Hayes netted a layup at the 6:27 mark to make the score 60-50. MTSU never got closer than that margin thanks to a sloppy finish that yielded no field goals in the final 4:20 of clock time. The Lady Toppers did not score in the final 2:42 either, but WKU held on for an 11-point home victory.

Following the win, WKU honored seniors Sidnee Bopp, Jae’Lisa Allen and Kayla Smith with a ceremony. The Lady Toppers, who have claimed two consecutive C-USA championships, are now headed to Frisco, Texas, for the C-USA Tournament. Due to a first-round bye, WKU will play its opening game in the quarterfinals on Thursday.