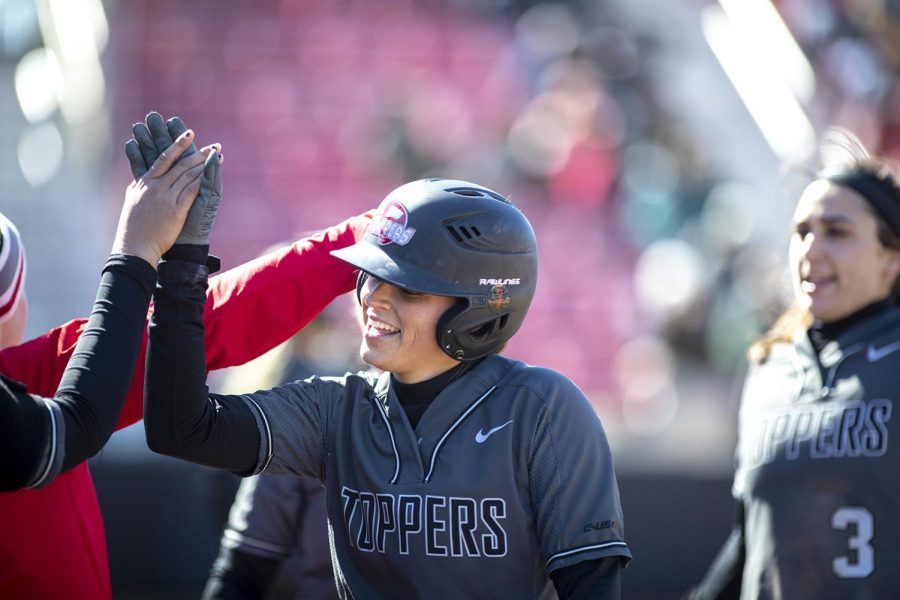 WKU’s Rebekah Engelhardt gets high-fives from her teammates in the 2 inning after scoring a run against Butler University during the WKU Hilltopper Classic at the WKU Softball Complex Feb. 24 in Bowling Green. Both Englelhardt and Morgan McElroy (not pictured) would score 2 of WKU’s final 3 points on an RBI single by Maddie Bowlds.

WKU Softball is on an eight-game winning streak after another outstanding performance in the circle this weekend. The Hilltoppers traveled to Birmingham, Alabama to compete in a Samford-hosted tournament, where they played games against Evansville, Jackson State, and Samford.

The Hilltoppers were also supposed to face Houston Baptist and Samford for a second time on Sunday, but the games were cancelled.

In their first game on Friday against Evansville, WKU took the lead early in the top of the first off of runs from senior infielder Rebekah Engelhardt, senior outfielder Shannon Plese and sophomore catcher Kendall Smith. Five more runs were added in the third and fourth innings and the game ended in an 8-0 win for the Hilltoppers.

Freshman Kennedy Sullivan threw a no-hitter and eight strikeouts against Evansville on Friday. This made the 13th no-hitter in program history. She is now 8-0 on the season. The game also made Sullivan’s third complete-game shutout of the season.

“I felt like in inning one, we got three runs on the board and she obviously in her groove, striking out eight people and we played great defense behind her,” head coach Amy Tudor said of Sullivan in a press release. “This is a pretty special moment for her; I’m proud of her and proud of the team. Overall, this was a great team effort.”

Sophomore Shelby Nunn and junior Kelsey Aikey worked in the circle against JSU to earn a combined one-hit shutout. Nunn worked the first five innings while Aikey closed with the last two.

Senior outfielder Jordan Vorbrink opened the scoring for the Hilltoppers in the third inning while Smith, junior catcher Tommi Stowers, and Plese added three more in the fourth and sixth innings.

WKU earned its 13th win of the season in Saturday’s second game against Samford, which ended 8-1 after another solid performance by Sullivan.

Sullivan posted a career-high 17 strikeouts and had at least two in every inning of the game. By the end of the fourth inning, Sullivan had struck out every Samford batter at least once.

The Hilltoppers have achieved a record of 13-2 this season, the best start in program history. They also have a win percentage of 86.7, best in Conference USA.

“I really think this team cares about each other,” Tudor said in the release. “We have all facets of the game covered with this squad. We have a strong pitching staff, people that produce offense, people that fill in roles nicely. When you can succeed in all three parts of the game, you give yourself a really good chance to win. It starts with caring about your teammates though and putting in effort outside of game day and this team has worked really hard.”

The Hilltoppers will be on the road again next weekend when they travel to Kennesaw, Georgia to compete in the Bobbie Bailey Memorial Tournament. Their first game will be against Wright State on Friday at 10 a.m.