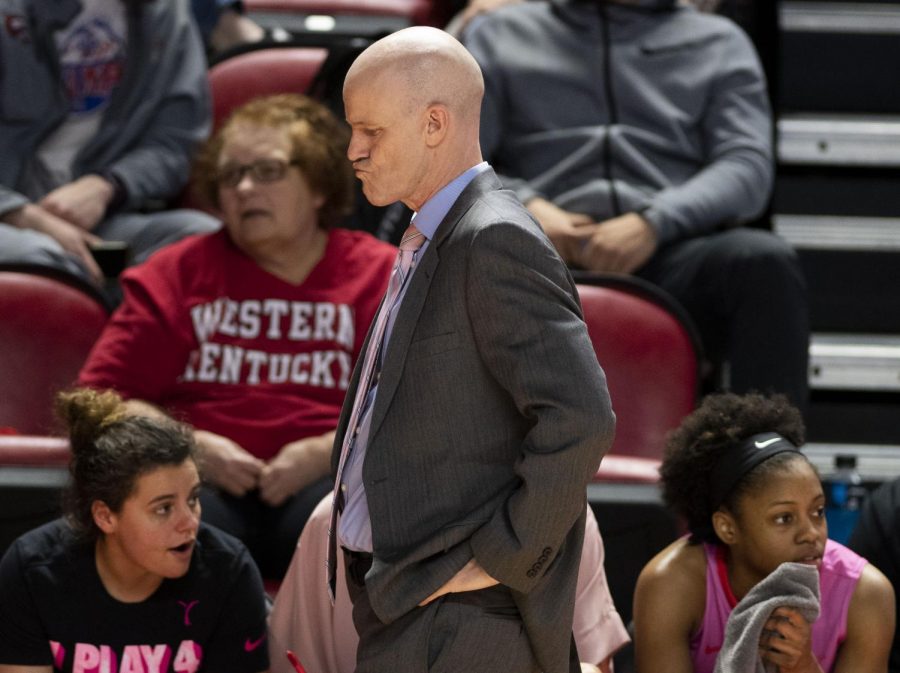 After two straight rallies from second-half deficits, the WKU women’s basketball team fell to Ohio in the Round of 16 of the Postseason Women’s National Invitation Tournament on Thursday evening.

WKU (20-15) traveled to Athens, Ohio, to meet the Ohio Bobcats (30-5) for their third-round WNIT matchup. The Lady Toppers out-rebounded Ohio 38-30, but got outscored in the paint 34-26. Ohio translated 13 turnovers into 16 points, showcasing a potent and persistent offensive attack in its 68-60 win over WKU in the Convocation Center.

The Lady Toppers could not replicate their March magic against Ohio, a squad that proved why it narrowly missed out on an at-large NCAA Tournament bid.

The Lady Toppers were led by redshirt junior guard Alexis Brewer and junior guard Whitney Creech. Brewer tallied six rebounds and 14 points on four made 3-pointers, while Creech scored 13 points to go along with a team-high six assists.

A jumper from Elgedawy gave the Lady Toppers the first bucket of the contest, but the Bobcats quickly rattled off a 5-0 run. Brewer helped WKU step back in front 8-5 after nailing back-to-back 3-pointers from the exact same spot on the floor.

Ohio briefly regained the lead after a 4-0 run, but an Elgedawy layup kept WKU in front 10-9 at the first quarter media timeout.

Following that stoppage at the 4:01 mark, the Bobcats mauled the Lady Toppers for the rest of the opening period. Ohio ended the first quarter on a ferocious 10-2 run that was aided by WKU failing to register a single make other than two late foul shots.

WKU’s deficit ballooned to double-digits after Ohio drained a 3-pointer to open the second frame, 22-12. But the Lady Toppers did not go away, opening up a 12-2 run that tied the game 24-24 with 5:28 left to play. That score held until a stoppage with 4:50 left.

Redshirt sophomore forward Arame Niang, who finished with nine points, pushed WKU back in front 31-30 with 0:28 left to play after swishing a 3-pointer, but junior guard Amani Burke then sank a buzzer-beating layup, helping Ohio end the half still in front.

WKU trailed at the halftime break for its third straight game, 32-31.

Sophomore guard Cierra Hooks, who finished with a game-high 21 points, opened the second half with a layup, spurring the Bobcats to a 6-2 start that forced Collins to ask for a timeout with 7:18 left to play in the third. Brewer nailed her third 3-pointer following the timeout, pulling the Lady Toppers back to within two points at the 7:04 mark, 38-36.

After continually having their lead trimmed to a narrow two-point margin, the Bobcats got back to work on the scoreboard. Ohio pushed its lead to 49-40 over WKU at the 2:16 mark thanks to a 7-0 scoring run was capped off by a 3-pointer from Burke.

Givens answered with a 3-pointer of her own, helping the Lady Toppers head into the final period trailing Ohio by only five points, 50-45.

Brewer capped her perfect 4-of-4 start from beyond the arc with her final 3-pointer of the night to begin the fourth quarter. Although the basket cut Ohio’s lead to only two points at 50-48, the Lady Toppers were never able to swing the score back in their favor.

The Bobcats answered Brewer’s make with two quick makes of their own, forcing Collins to call for another timeout down 54-48 with 6:10 left in the contest. WKU kept nipping at Ohio’s heels, but could never get closer than a four-point deficit.

Yet another 3-pointer gave Ohio a 62-54 lead late in the fourth, effectively ending any chance WKU had of salvaging its postseason hopes. After clutch foul-shooting and little resistance from the Lady Toppers, who chose not to foul in the closing moments down by less than double-digits, the Bobcats prowled to an eight-point home victory.

With the loss, the 2018-19 season drew to a close for WKU women’s basketball. The Lady Toppers dropped to 5-11 on the road and 18-14 all-time in the WNIT, but finished with an overall record of 20-15 and notched their seventh consecutive 20-win season.