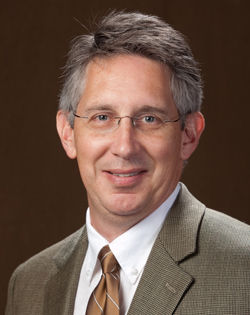 Larry Snyder is stepping down as dean of Potter College, effective Wednesday, according to an email from WKU Provost Terry Ballman.

Ballman wrote in the email that Snyder “will be on leave preparing to resume his duties as a member of our faculty.”

“We look forward to initiating conversations about the search we will be conducting in the coming months,” Ballman wrote.

Of all the WKU colleges, Cheryl Stevens, dean of Ogden College of Science and Engineering, is the only remaining dean from former WKU President Gary Ransdell’s tenure.

Snyder attributed his resignation to changes and transitions in how WKU is structured. He said the ongoing CAPE process is a part of that change but his resignation is not a direct result of the process.

Snyder said he will be on leave during the fall semester but will teaching again in the Religious Studies department in January.

“We always serve at the will of the provost as deans, at any point something like this could occur,” Snyder said of his resignation.

He said the meeting between the provost and himself acted as a typical meeting.

“I have been privileged and honored to serve this university since I started as a faculty member in 1990 and I’ve been in the dean’s office since 2003 and I can’t think of a better job in the world,” Snyder said.

University Senate Executive Committee Chair Kirk Atkinson said there have been no requests for a special called Senate meeting. He said he had not received responses from faculty members within the Potter College but was surprised by the news of Snyder’s resignation.

The Herald contacted Director of Media Relations Bob Skipper for more information on Ballman’s announcement, but he said he did not have any additional information at the time.

Ballman also declined to comment further because it was a personnel matter.